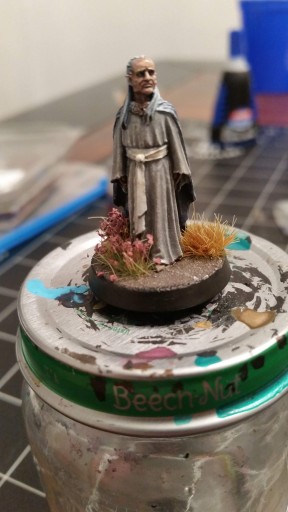 It’s been a long time since my last hobby update. I haven’t painted up too much since I completed my Underworld Denizens team for Blood Bowl, up until the past two weeks. So let’s start off with the most recent. This weekend I finally finished my Cirdan for my Rivendell force, despite having started him … wow, almost a year ago! I picked up a color from a different line of inks, Amsterdam Acrylic Inks to finish off Cirdan’s robes. I wanted the robes to be a light grey, but repeated coats of Nuln Oil weren’t getting there for me, which is why kind of got abandoned.

I had picked up the Neutral Grey from Amsterdam Acrylic Inks a week or so ago. Initially testing on the back of my hand suggested it was a little on the opaque side, so I added a drop or two of Vallejo Glaze Medium. Two thin coats later and Cirdan’s robes were done! Then it was a simple job of doing the basing. Grass shrubs by Army Painter and the flowers by Gamers Grass.

I’ve also decided on my first evil army. Initially this was going to be The Dark Powers of Dol Guldur, but after Jeff sent me 24 Mordor orcs that he and James had been sending each other back and forth as somewhat a joke, I decided to start an Angmar army. I also ended up buying a bunch of metal Mordor orcs, warg riders, captains and banners from James who was offloading his LotR collection. 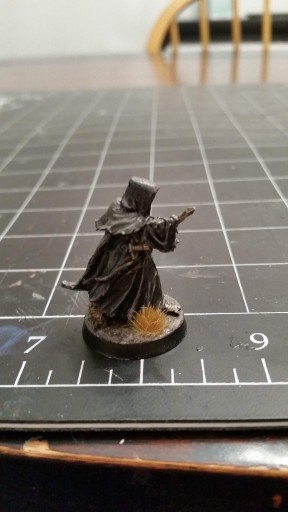 And who better to include in an Angmar force than the Witch King himself! I got this guy fairly cheap on ebay, and decided to paint him up right away. Happy to say I painted him up within 48 hours of receiving him. I know he’s not in his full Witch King glory with the Crown of Morgul, but I do like the creepy Weathertop pose. Classic.

I’ve also been up to several things for Rivendell that haven’t been reported in a while. Back in December for one of our paint challenges (that I never reported the results of) I painted for elf bowmen. 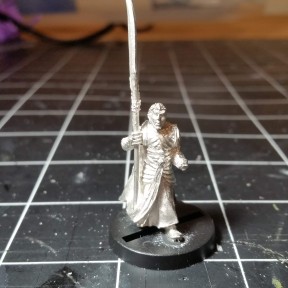 I also worked on some conversion for characters for Battle Companies. The mounted Arwen in the back is really more of a repair as she was missing her sword.  Since I already had the finecast Elrond foot and mounted, I decided to turn my metal Elrond into a helmeted dude, swapped his head onto a headless Glorfindel. And I used a head from one of the twins on a spear elf and a Rivendell Knight head on a sword elf body. I think the Rivendell Knight head is a little too big for the old plastic sword elf, but it’ll do.

And why all these head swaps? Because I made my mounted Glorfindel and Gil-galad conversions of course!

I’ve also been working on my press molding so I can equip all my sword elves with shields, and give some shields to my Mirkwood Palace Guard for my Halls of Thranduil force that I’m sure is bound to happen … some day.

Last month I purchased my biggest, heaviest model yet. A metal Gulavhar for Angmar. He started out as a big red monstrosity so he promptly got a bath in LA’s Totally Awesome, which I think has become my go-to for stripping minis.

Today in the Oldhammer Facebook group, a challenge was put forth. See, sculptor Trish Carden has been sharing all sorts of awesome nuggets of GW history on her Facebook page. She shares pics of the greens sculpted and shares anecdotes about her work. To thank her for her contributions to the hobby, the author behind the Lead Plague blog suggested a challenge of painting a Trish Carden sculpted mini by the end of the month of April. There may even be a prize involved (not that I’ll win). As much as I admire oldhammer minis, I don’t have many in my collection. But Trish did work on several mins for the LotR range … including none other than Gulavhar! Look who jumped to the head of the paint queue.