I woke up this morning to the alarm going off on my phone, as I roll over to hit the snooze my bleary eyes so a push notification from YouTube telling me Warhammer TV has posted a new video, a trailer for Soul Wars. What’s this, my brain asks? My bleary eyes take in the info, then check Warhammer Community to see a news post about a mile long detailing all the million awesome things coming to Age of Sigmar this month.

First off … a really nice gif! Seriously, lets all appreciate this nice looping gif of the Soul Wars box exploding and coming back together. Over and over again … it’s so hypnotic. I really like the cover art for the box, not some gigantic battle scene, well there is in the muted background … it just looks classy. Don’t get me wrong, I love me some gigantic battle scenes on the covers of games, like this baby that got me in the hobby … 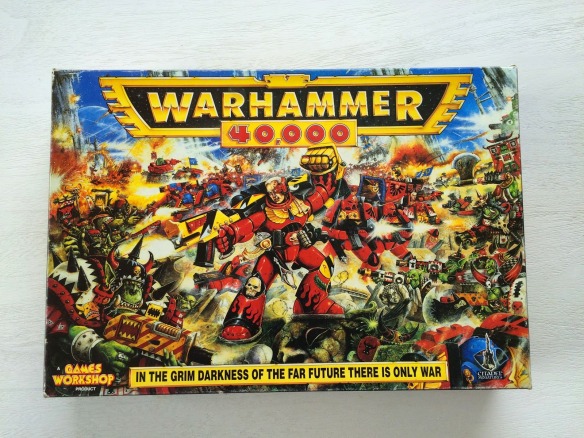 But I digress … look at this sprue! GW says all the models in the Soul Wars box will be push fit, from the standard line troops to the heroes. Clearly a move to get beginners into the hobby. No complaint there as the end result are some great looking models.

Here’s the contents for the Stormcast Eternals

Look at all this stuff! A new commander on one of the gryphon mount things (I do love me some gryphons … and manticores … and pretty much all fantasy creatures). There’s a stormcast wizard! And I think it’s a she. There’s some evocative evocators and castigating castigators and a stormcast war machine! A ballista that launches lightning bolts! That’s pretty legit. Perhaps … too legit?

Stop! Hammer of Sigmar time! OK, back to the news … 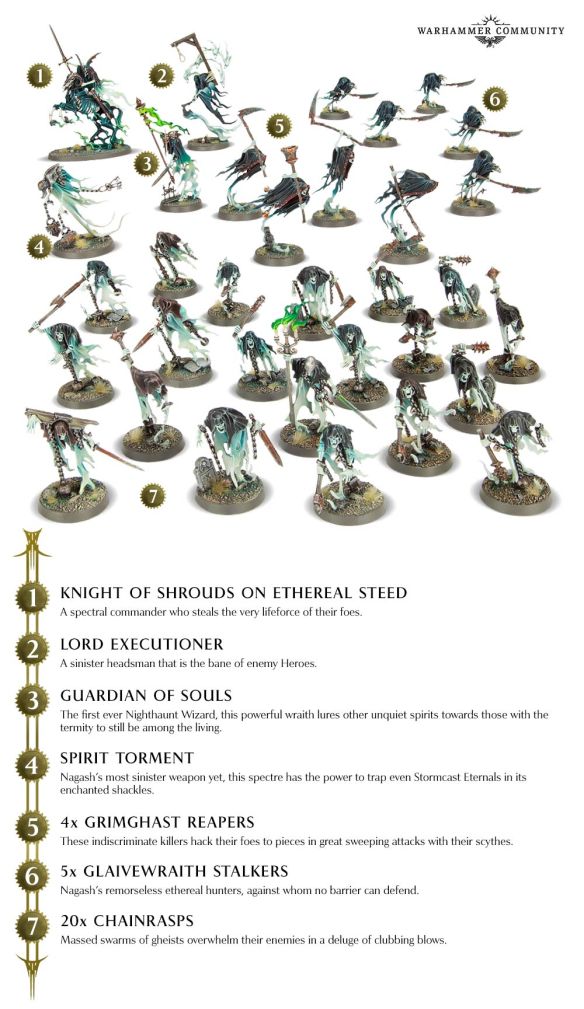 Nighthaunts! The first new set of undead stuff since Age of Sigmar came out. Look at all them ghosts! Ghosts with chains. Ghosts with swords. Ghosts with locks. Ghosts with scythes. A ghost knight on a ghost steed! Freaky looking ghost things with horse heads that reference Welsh folklore. 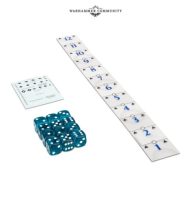 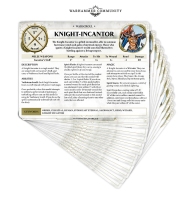 The box set also comes with everything you need to play of course. There’s a Start Here booklet that serves as an intro to teaching new players the rules and a 32-page Battle for Glymmsforge book that sounds like a campaign to play out for the two armies in the box. There are some really nice looking dice and measuring sticks as well. There’s also 13 warscroll cards to serve as quick references for your units during play.

The Warhammer Community post say you also get the 320-page hardback Core Rules book. I love the cover. That female (!) stormcast looks awesome with some intense facial tattoos and badass hair. I love her. Visually the book looks great. It’s going to contain so much more fluff about the lore of the mortal realms than the previous edition, which honestly made it hard for a lot of people to get into the theme of Age of Sigmar. So much was known about the Old World aka The World That Was that when the mortal realms were introduced old fans were like …

But we’ve grown to love the mortal realms and now we get to learn more about them. I’d like to make another note that the new book looks gorgeous. Now, I’m a huge fan of the old classic GW art, Ian Miller, Wayne Newton, John Blanche, et al, but I’m growing to appreciate the new art as well. And the layout is so clean and readable too … 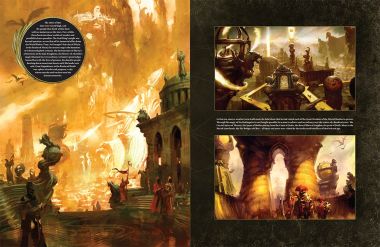 Hold up, what’s with the character there in the corner of the Everspring Swathe? As an aspiring Sylvaneth player, I need to know more. Is that Alarelle? A new character? Looks like a she, but is it a he? I’m intrigued. 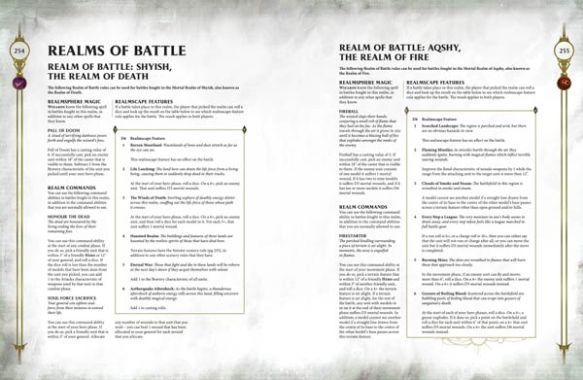 The second half of the Core book is dedicated to playing games. There’s rules for playing in the different Realms of Battle, Battleplan generator and rules for playing multiplayer. Will the Battleplan cards still be a thing? Gotta be, I think the card packs for all the different games are something relatively easy for GW to produce and appear to be selling well. There’s also a guide to narrative play and six matched play battleplans as well.

As if that wasn’t enough they had to go and preview Malign Sorcery, give my fingers a break guys!

This is seriously going to ramp up magic in the game. And for the first time every, models for spells! That definitely adds further immersion to the game as you’ll see your super death fire spell launching itself across the table. These also look pretty cool for you converters out there, think about all the possibilities of those energy effects and whatnot. 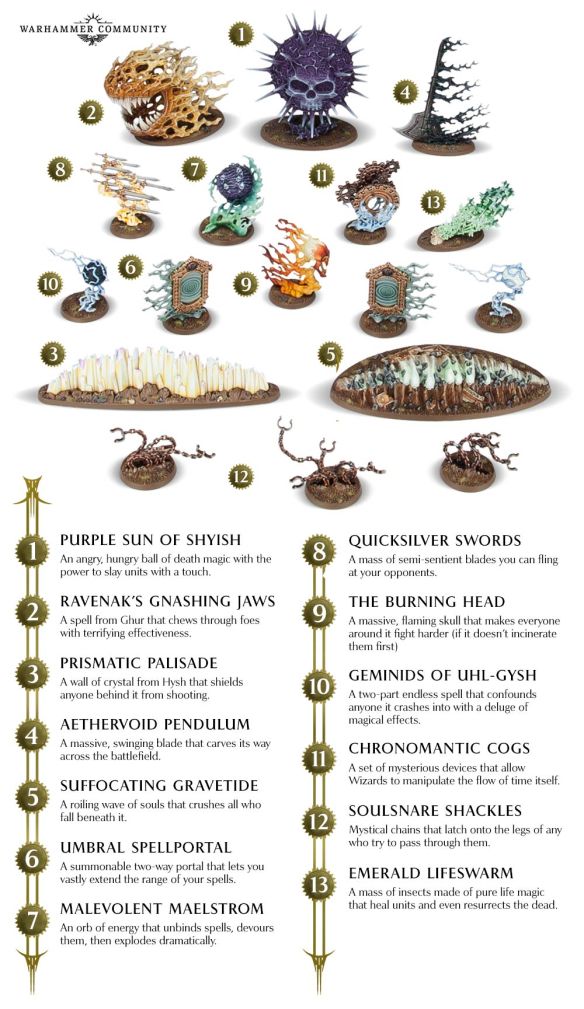 And of course there’s this year’s edition of the General Handbook. It’s got 12 more battleplans to play, more stuff for open play and the introduction of Aerial Battles, battles in the sky you can play out that have an effect on the battlefield below. I’m not entirely clear on how that’s going to work out, but it certainly sounds awesome. There are rules for generating your own battleplans for narrative play to allow you to create a custom campaign. There are 43 rules for adding strange effects to your your battleplan. Sounds awesome for people who like to add a little more story to their battle. Gathering of Might is about playing really big battles with hundreds of models and multiple players, streamlined rules for deployment and combat will help you get through these massive games quickly (well probably quickly-ish, right?)

Citadel is releasing some new paints that is going to make painting your Nighthaunts quick and easy. Similar to the Nihilakh Oxide technical paint, Hexwraith Flame and Nighthaunt Gloom look pretty good over just a white prime. 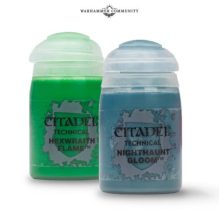 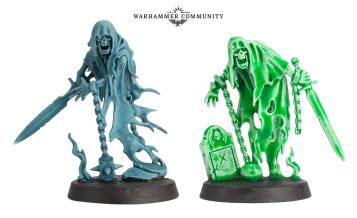 There’s a battle gauge, some more dice, several sets of dice for randomly rolling up terrain effects and sets for keeping track of command points and status effects.

And objective markers! These bits really had some nice touches to a battlefield. You could use them as objectives or scatter terrain, really. I particularly like the chained floating rock, very sinister. 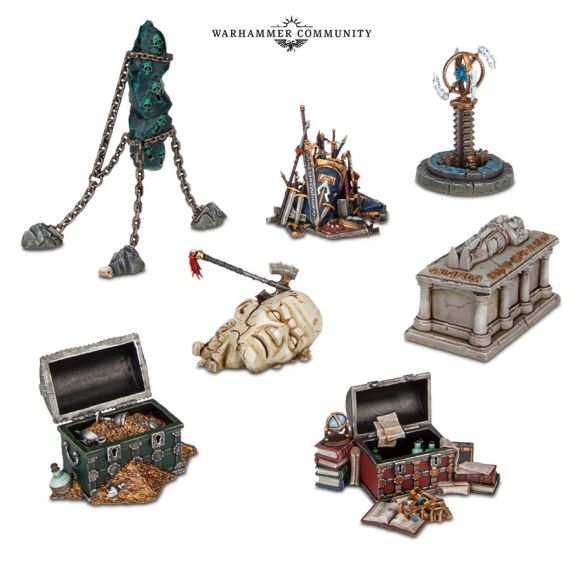 Seriously, this is starting to sound like a As Seen On TV infomercial. There’s preview images of new stormcast and nighthaunt units that will be coming out soon as well. 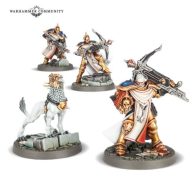 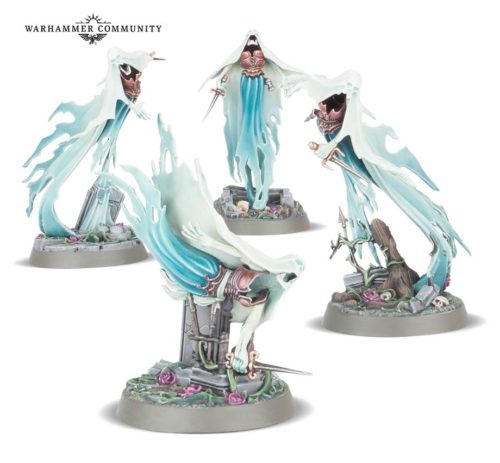 Looks like we’re going to get some more female stormcasts (yay!) and another gryph hound (double yay!). I love those little gryph hounds, so cool. And some banshees that look like they flew threw a clothesline full of sheets. Ghosts playing dress up as ghosts. Double spooky! Seriously though, I think they are some cool models, I love the swooping one in front and the more static pose in the back.

All of this will be available on launch, as well as more books, boxes sets (sounds like those smaller starter sets we saw for AoS and 40k 8th edition) planned for the future. When is launch you ask? Pre-order starts June 16 and launch is June 30. It’s going to be a busy month in the mortal realms.