My previous article on airbrushing was more in an attempt to humorously illustrate how I hid the cost of airbrushing and added a bulky new hobby toy into my work area without getting too many probing questions.  This week I’ll go over the breakdown of the tools I actually picked up to make my skin tone project a reality.

An airbrush is obviously required if one wishes to actually try airbrushing.  I decided on the Harder and Steenbeck Ultra 2 in 1.  The ‘2 in 1’ refers to the fact that it came with two different sized needles.  I don’t see myself attempting delicate airbrushing techniques so the smaller .2mm needle has remained in storage while the .4mm has been in constant use.  I did add a couple of accessories.  First I made sure to get the larger of the paint cups to go with the airbrush as I plan on priming models exclusively with the airbrush moving forward.  Additionally, I added a quick release to the bottom of the airbrush so it can easily be removed from the hose.  It gives me a way of limiting airflow into the airbrush if I want to do some light shading and don’t trust my caveman dexerity.

I purchased a couple of  caps to enable me to mix paints in the paint cup.  The prevent paint from leaving the brush and instead have the air go up through the paint reservoir.  This technique seems to be a rather controversial practice in the world of airbrushing, but so far it has treated me well and I continue to use it.

Overall I have been pleased with the airbrush. I’m sure the vast issues and clogs I have encountered are entirely my fault, but I do have one complaint.   Often I’ll get a bit of paint leakage where the paint cup connects to the airbrush.  Often this happens while I’m mixing paints with a paint brush in the cup.  Perhaps if paint cup just didn’t slide in it wouldn’t happen?  Either way it rarely causes any issues besides a bit of cleanup when I’m done painting.

The next critical piece and what ended up being my most expensive purchase was the compressor.  I don’t know what the answer is as far as how nice of a compressor you need.  I watched a lot of videos and took a lot of notes and decided on going with Sparmax.  It was not cheap and easily cost more than all the other accessories combined. 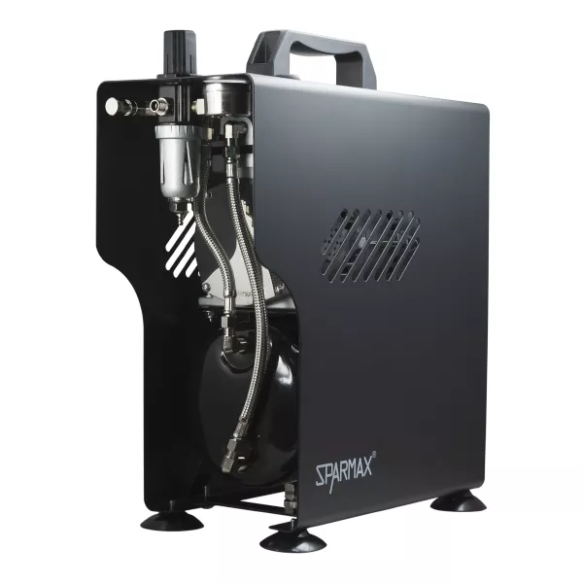 I am usually moving every three years so I was looking for something that was rugged and would standup to the usual rough handling that my household goods go through.  Overall I have been pleased with this compressor.  Being in the room with it while I work it certainly isn’t a Whisper brand aerator, but I don’t get any complaints from the bedrooms adjoining my work area.  It also came with a braded hose which was nice.  Again, this guy is not cheap.  Perhaps I went with too much muscle for what I actually needed, but it was deployment money that I was throwing around.  If does come with two airbrush holders on top of it so I have a safe please to store the airbrush when not in use.

I know some people don’t use them, but the next component I was looking for was a spray booth.  I suppose the right answer would be to use this setup outside of the house, but that isn’t very convenient especially during the arctic months.  I also wanted to get a booth that would offer some light so which is always welcome.  The one I settled on is a cheap one that can be found all over Amazon from a variety of sellers. 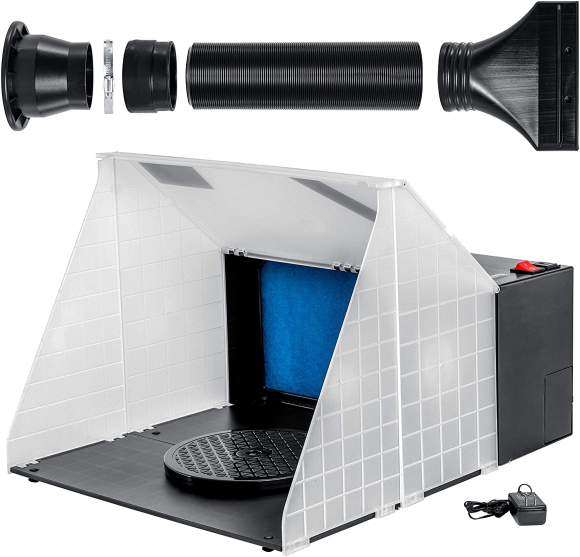 This particular model does not have the light attachments, a MUST in my opinion.

Ideally you would vent this out of the room through a window.  I’ll be honest I haven’t been doing that.  It does do a good job of collecting the excess spray.  I did get a slight bit of spray dust on the wall behind it, but it was easy to just wipe away.  Sound wise I also don’t get any complaints from my sleeping family in the adjoining rooms.

The final pieces of equipment that I got have all been helpful.  On the left I have the airbrush cleaning pot.  This is useful for when I need to spray out remnants of paint or if I need a spot to hold the airbrush while I’m cleaning.  The hook comes in handy when I have the tip of the airbrush off for cleaning and the needle is still in.  I’ll put the airbrush perpendicular to how it is normally in the holder and it keeps it steady and gives me piece of mind that I won’t damage the needle accidentally.

The goose-neck bottle is great for cleaning out the airbrush.  I’ll hold the airbrush paint cup over my waste water cup and use the bottle to get out the vast majority of left over paint.  The bottle is also great for rehydrating my wet pallet if it starts to dry out.  I’ll be honest, I’ve even thought of taking a few sips from it on hot painting days.

The cleaning rods for the airbrush see constant use.  I was lucky in that a lot of airbrush supply vendors throw these brushes in for free with other purchases.  These are critical to own as its amazing how much of mess you can make with an airbrush.  I have several varieties but the set I started using have been going the distance.

As I mentioned before the intent of this project was to work on skin tones.  Before the project officially started though I gave the airbrush a whirl and along with making a huge mess I was able to get one model’s skin knocked out.  It was pretty for the first run as I didn’t have any thinner for my paints but I’ll share some shots.  Next week I’ll highlight the five+ schemes I went with and show off the work I was able to accomplish.

Things were sloppy at first

The scar was painted with a wash afterwards

The conclusion of “Project Skin Tone” can be found here!

14 thoughts on “Taking the Plunge into the World of Airbrushing, Part 2”