Once again I decided to reinvigorate some life into my Mordheim collection and selected my Beastman Warband to leave the Empire in Flames of the world that was, and to join the new hotness of Warcry!

There isn’t much to say for this weeks entry.  These models I painted up while I was stationed in Korea.  Being a year away from my family I created a Hermit Kingdom in my barracks room and spent a lot of time ordering hard to find models on eBay and attempting to get models painted.  I ended up adding way more metal to my collection than I was able to paint.  Being over six years ago I hope that my painting has improved some.  At this point in my hobby life I was beginning to experiment with layering and was leaving behind the old standard of sloppy dry-brushing.  The models are a mix of the official Mordhiem warband models and some very old metal beastmen from GW.  I never cared for square bases but our gaming group always used square bases for Mordheim.  It was quite nice to see these characters on larger round bases.

The official Mordheim warband models are some of the most unique looking beastmen ever created by GW.  Their horns are all pretty bizarre and each model has its own personality.  The drawback of these models is that in Mordheim the beastmen had no access for ranged weapons unlike the Un-gors in Warcry who can utilize bows.

I have yet to play Warcry despite my rather large collection of models, so I don’t even know if bows would be something that is worthwhile.  Either way I put a lot of time into this Warband years ago and I don’t intend to part with them anytime soon.  Their paint jobs could be a lot better, but every time I pull them out of storage they just give me good vibes. For the time I felt like I was able to do some good skin layering and a bit of edge highlighting.  I also attempted to paint fire for the first time and it turned out OK.  No light effect this time round as I didn’t want to mess up my paintjob.  Some of the smooth horns are certainly not my best work and that is probably one thing I still need to work on.  A lot of the axe blades are rather armature looking too.  Always plenty of room for improvement. 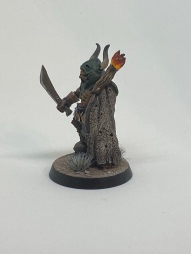 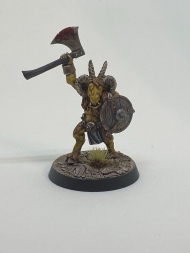 My one gripe about the Mordheim models is that there are a lot of severed heads that have some really crazy long hair.  I often think that they just raided an 80’s rock band’ because the hair is just ridiculous.  There are also some models lugging around loot too which may not be so practical for the Warcry narrative.  Maybe they raid the few settlements in the area? 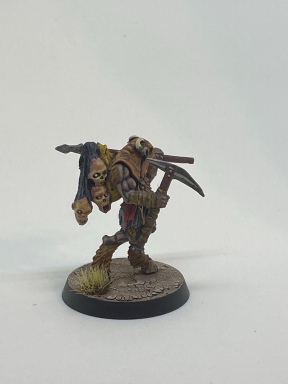 For the shields I picked up some Chaos Maurader shields from the old GW plastic set.  They are some really great shields with a lot of character and good design details.  Axes where the weapon of choice for the Gors due to their bonus to armor piercing in Mordheim. 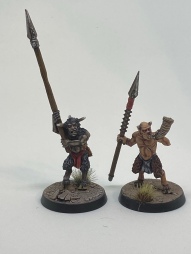 The weedy un-gors got plastic spears from their modern peers with the exception of the one Mordheim model that already came with one.  The spears are probably a bit too long for practical purposes, but once they are on the table they don’t stand out too much.

I didn’t have a base large enough to bring the minotaur along with the rest of the gang and I was also out of oval bases for the Centigor.  The minotaur is one of my most favorite minotaur models I’ve seen.  The new GW plastic ones look like a steriod factory reject.  There is a classic vibe to the model that I really like,  As for the centigor, I honestly don’t know if they are still a thing in Age of Sigmar lore but the model is a nice one and I’d like to have him in the heard.  The shaman should have been based in the new style but he got hidden under some foam and he missed the conversion.  I’ll certainly bring him over to the new generation once I have an opportunity.

That wraps things up for this week.  Hope you all are doing well and keep up the hobbying!

4 thoughts on “Warcry: Mordheim Beastmen Join the Herd and Head to the Varanspire”