The best kind of Blood Bowl team is one that I did not have to paint!

As I have said many times before, I do not enjoy painting minis. I do it because games are better when minis are painted. I also can not usually afford to pay anyone else to paint my minis for me because I always end up spending all of my gaming money buying the games and minis. Every once in a while though, I can manage to get painted minis without having to put in the work myself.

In this particular case, a friend wanted the new Norse minis from the Hungry Troll Kickstarter campaign. We made a deal and he agreed to paint all 16 minis for my 5th edition Games Workshop Elf team in exchange for me pledging for the Norse team for him. Win win.

We are still waiting for the minis to be delivered from the Kickstarter (I will do an unboxing post when they arrive), but Jeff dropped off the Elf team last week when we had our Mordheim game night. The minis were 90% finished when I got them. All there was left to do was to number them, do base ring colors, clear coat them, and apply static grass. If I would have mentioned initially that I planned on doing base colors, Jeff would have already done that, but I did not think about it before hand.

Since I bought two copies of the new Blood Bowl boxed set, I had a spare decal sheet, so I decided to use the Human team numbers for the Elf team. There really was not a common spot that I could put the numbers in the same place on every mini, so I had to get a little creative with placement. 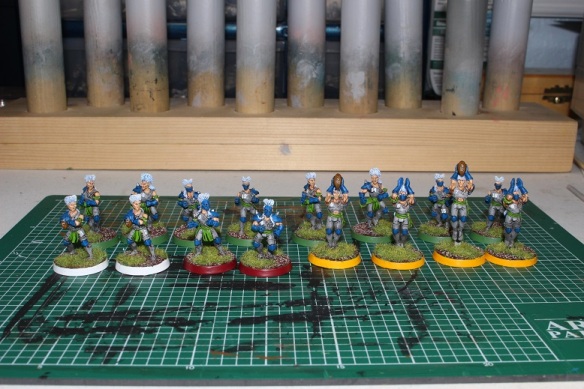 The whole team with numbers, base colors, and grass. 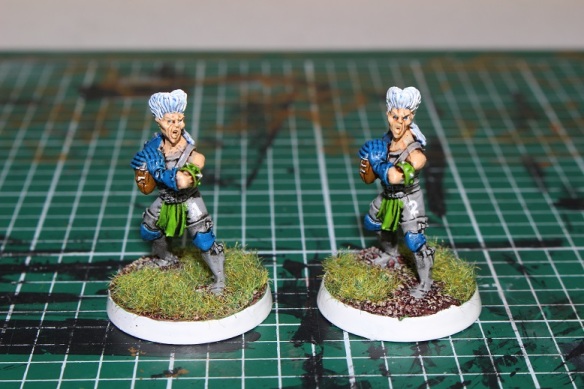 Both Throwers. Unfortunately, I was not able to get my hands on the really rare Thrower mini, so I had to double up on the same sculpt.

The muscle of the team: the Blitzers.

All four Catchers for the team. Only one of the minis still had the base tab intact, so we had to get a little creative attaching the other three to the base. I think they turned out nicely.

Linemen are the workhorses of any team.

Honestly, the sculpts for these minis are not my favorite, but I also have not really found any other Elf team minis that I like more than these. I think Jeff did a really good job with these minis. The most impressive part of his paint work is that he can paint an entire team like this in just a couple of nights of painting. It would take me a month of work to finish this team.

He went with a Seattle Seahawks color scheme, so I think I will take the easy NFL pun and call this team the Sea Haven Seahawks. Sounds good to me!

One more team down. Only about fifteen or so to go!

4 thoughts on “What Is The Best Kind Of Blood Bowl Team?”