Alright, in my last post I asked which mini you wanted to see in an unboxing next. I got a few responses between this site, Facebook, and Reddit, and the results were unanimous. Everyone wanted Grim Ironjaw for the next unboxing. So… here we go!

When the first images of the Grim Ironjaw were released, I read a lot of negative comments online about the mini. Honestly, I am not really sure what all people have against this mini. Other than the fact that it is yet another mini standing on one foot (seriously… does EVERY mini from Forge World have to be on one foot?!), I really have no issue with the new Grim. I might even say that I like him. He is definitely a different style than the last Grim Ironjaw, but he fits the new style of the game quite well.

Time to dig in and take a look. 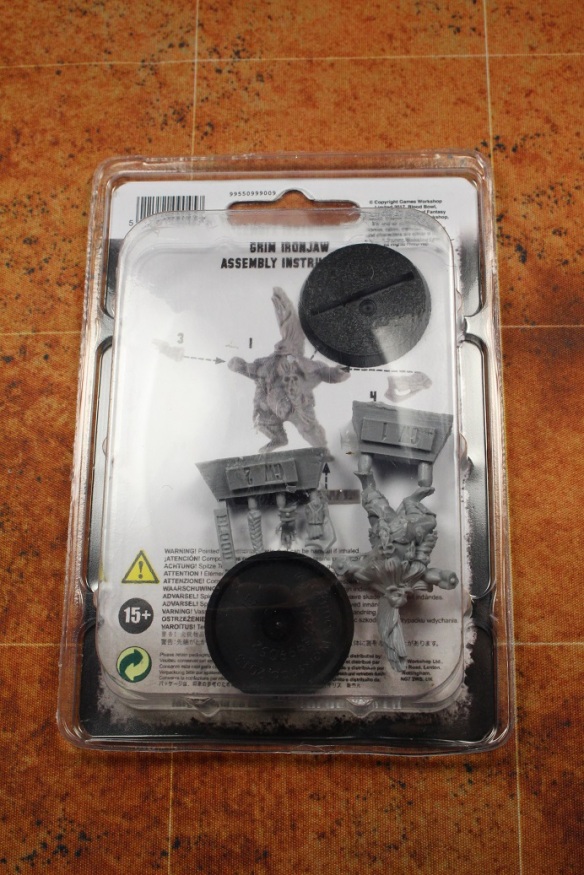 Front and back views of the package.

Here are the obligatory shots of the insert. 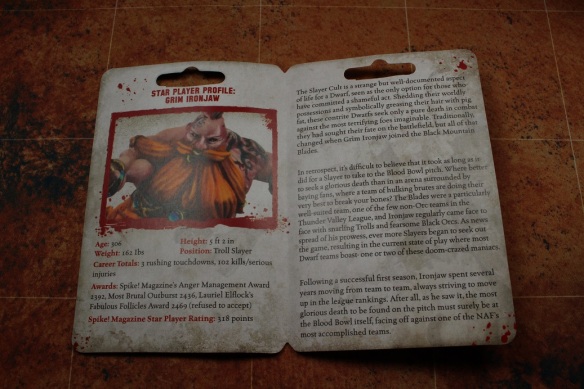 As with the other Star Players, the insert opens up to lots of good fluff about Grim. It is always worth taking a few minutes to read up on your Star Players.

The back of the insert, as always, has assembly instructions. At only five pieces, Grim is, by far, the least complex Star Player released by Forge World so far. But… what is that piece listed as number 5? …More on that in a minute.

Again, as with every other Star Player from Forge World, we get both a standard base, and a slotted base.

All five pieces of the mini. This is where this mini gets a little interesting. The long skinny piece on the far left that was labeled number 5 in the assembly instructions is actually a base tab. A base tab that is not attached to the mini… Huh? I have never heard of a base tab that you have to assemble. The assembly instructions appear to suggest that you can attach the base tab to both feet, even though they look to be a little uneven. Well… since I like base tabs for stability, I might as well give this a try…

So after prepping the pieces and dry fitting, it became immediately obvious that the base tab would only attach to one foot. On top of that, much like the Hakflem Skuttlespike mini, Grim is up on the ball of his foot, so only a VERY small part of his foot will be able to touch the base. Looks like I will need to do some more pinning…

I decided to stick to the using the base tab. At this point I kind of figured it could not hurt to use it. While drilling the top of the base tab, my bit slipped slightly and you can see where it broke through the front of the tab. I did not worry about that as once the tab was inserted into the base, the base itself would prevent the pin from sliding out of the tab. Luckily Grim’s foot was angled in such a way that I was able to embed the pin fairly deep into his ankle for added strength. 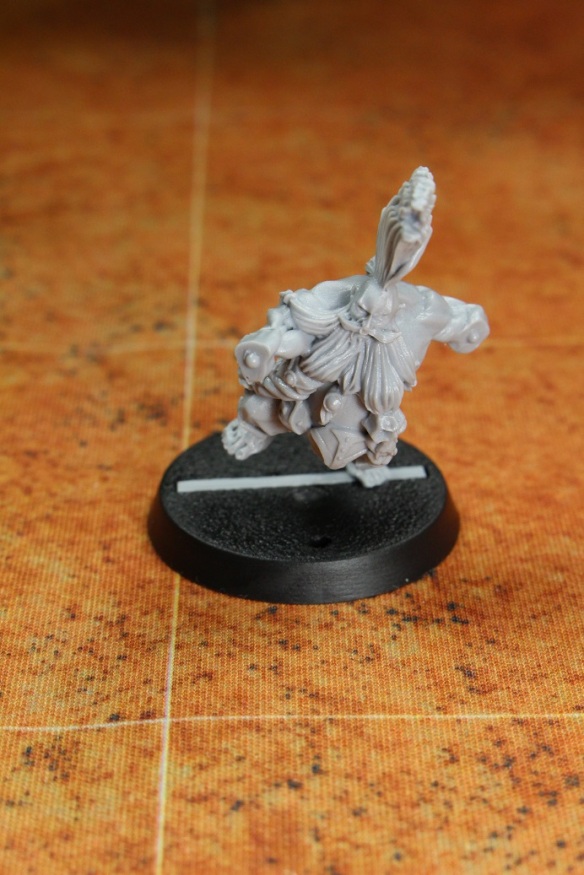 Here Grim is attached to his base. Only three more pieces to go.

Next up is his pony tail braid. Unfortunately, I was not careful enough trimming the braid off of the sprue, and I did not leave enough of a nub on the end to seat into the small hole on the back of his head. Looks like I will have to pin another piece on this mini.

Pinning the braid was easy enough. The braid itself had more than enough thickness to hold the pin, and the attachment point on his head already had a small hole. All I needed to do was drill one small hole, and slightly enlarge another. No sweat. 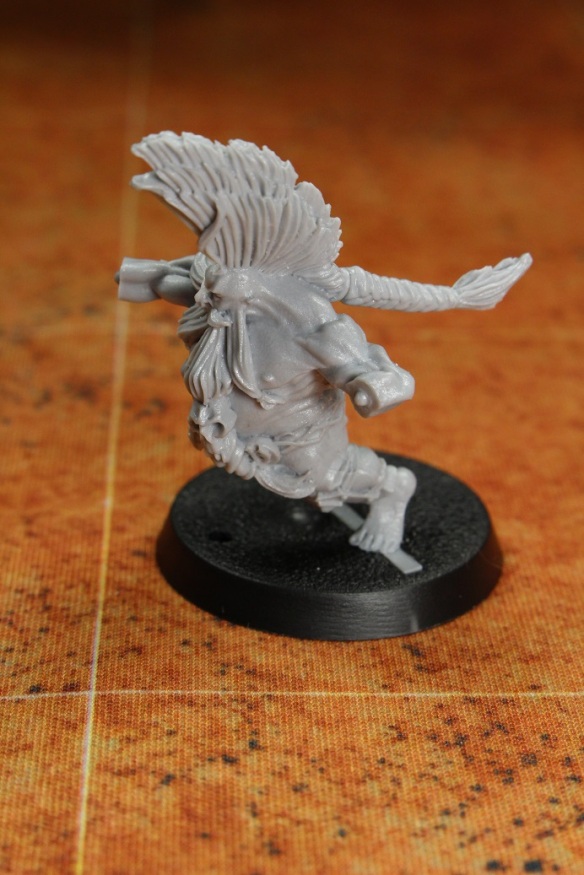 And just like that, the braid is attached. Over halfway done.

One hand down, one hand to go.

And just like that, we are done. Other than the weirdness with the base tab (what the heck is up with that?) this mini went together pretty easily. I honestly have no real assembly complaints on this one.

Here are a couple more angles on the mini. 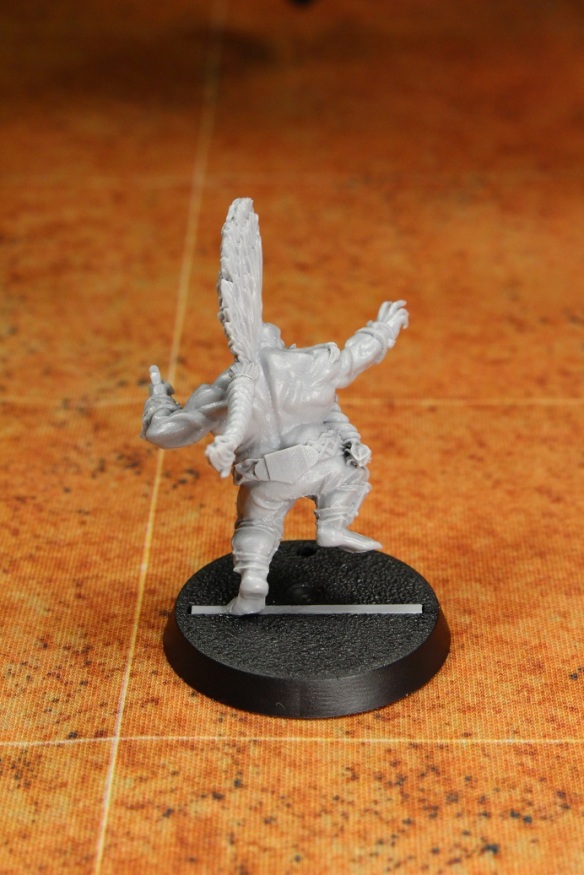 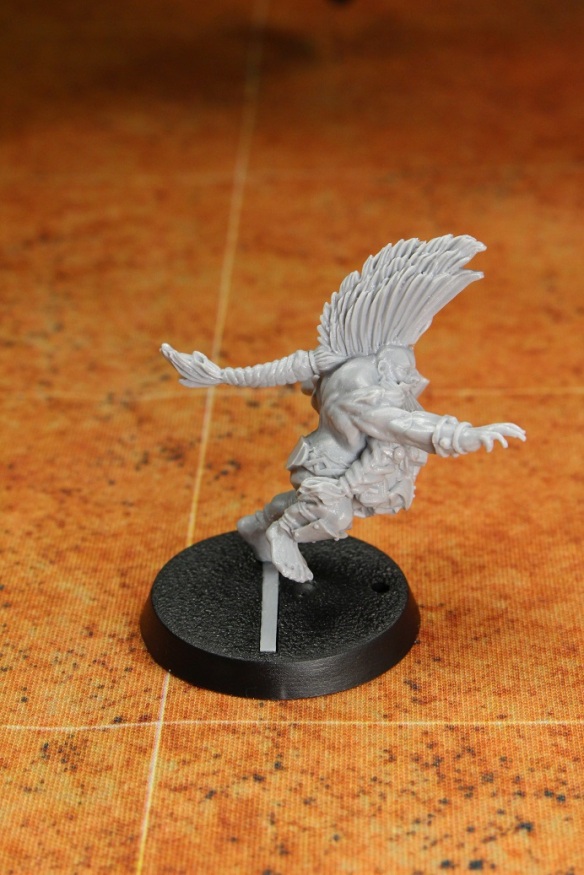 Lets do a quick size comparison. 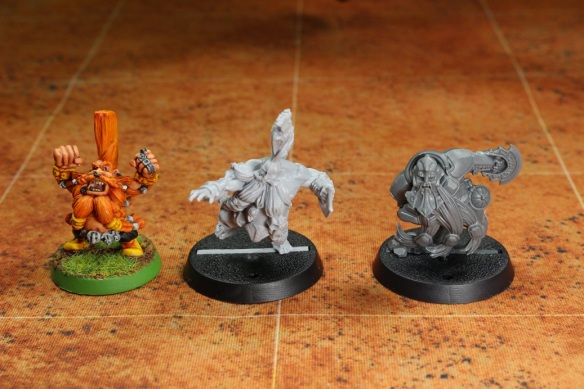 Here is Grim next to a boxed set Blitzer, and a 3rd edition Grim Ironjaw. His one footed lurching pose not withstanding, he is pretty much the same size as the 3rd edition Grim. Maybe just slightly larger. The main difference is that he is much more “realistic” scale as to his proportions.

My final verdict on the new Grim Ironjaw is a positive one. I genuinely like the mini. It is not the best Blood Bowl mini I have ever seen, but if you like the style of the newer releases, this Grim Ironjaw is a very good mini to add to your collection.

Next up will be the White Dwarf/Black Gobbo combo. Check back soon!

P.S. I had actually recorded a video to compliment this unboxing on YouTube, but for some reason, pictures and videos on the SD card I have in my camera just randomly get corrupted, and the entire middle section of the video I made is now unusable. It can make things incredibly frustrating. I will try to do better next time…