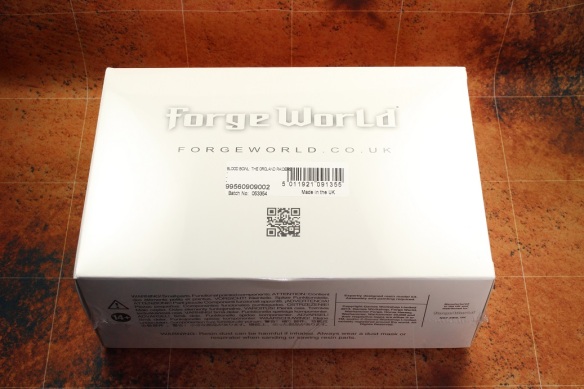 About a week ago, I got a box from Forge World with the Goblin Secret Weapons inside. I wrote about those minis a few days ago, and intended to write about what else was in the box a day or two later, but things just did not work out that way. Life happens, I suppose. Well, last night I finally managed to sit down with the second item, and I was able to assemble some Orcs! WAAAAGH!

Now, if I have not mentioned it before, Orcs were my very first Blood Bowl team somewhere back around 1997-ish. I know they are a lot of people’s first team since they come in the boxed set, but there was just something that I loved about the team. When my friends showed up with the game and Death Zone expansion, the first thing I did was run out and buy the erd edition Orcland Raiders box from my FLGS.

These minis were also the first real minis that I ever painted. I mean, I had dabbled in painting minis in my mid-teens, but I had NO IDEA what I was doing at the time. I did not actually know anyone, at the time, who was into miniature games, so I did not even know that I was supposed to prime the minis first. I just took the Testors enamel paints I had used for model cars, along with some of my step-mother’s Walmart acrylic paints, and I slapped it straight on to the bare metal minis using the free plastic bristled brush that came in the Testors box.

It was not until several years later, when some of my friends walked in with Blood Bowl and Necromunda boxes under their arms, as well as a handful of Citadel paints in their hands, that I learned even the most basic of painting techniques. It was with my beloved Orcland Raiders that I learned about washes for shading, and dry brushing for highlights. It was a fun time, and years before my realization that I hate painting minis. I still have that 3rd edition Orcland Raiders team, and while the paint job might not hold up all that well, they are still one of my favorite teams.

It is with all of that nostalgia in mind that I sat down to unbox and assemble the new (and improved?) Orcland Raiders team from Forge World. As I opened the shrink wrapping, a lot of things were going through my head. Would they hold up to my expectations? Would they replace my beloved 3rd edition team? Would they just be another set of minis gathering dust in my ever growing pile unpainted minis? Only one way to find out! Lets start unboxing…

The team comes in the standard, non-descript white Forge World box. It would be a little cooler if they came with nice box art like the standard Games Workshop teams, but I understand why they do not. 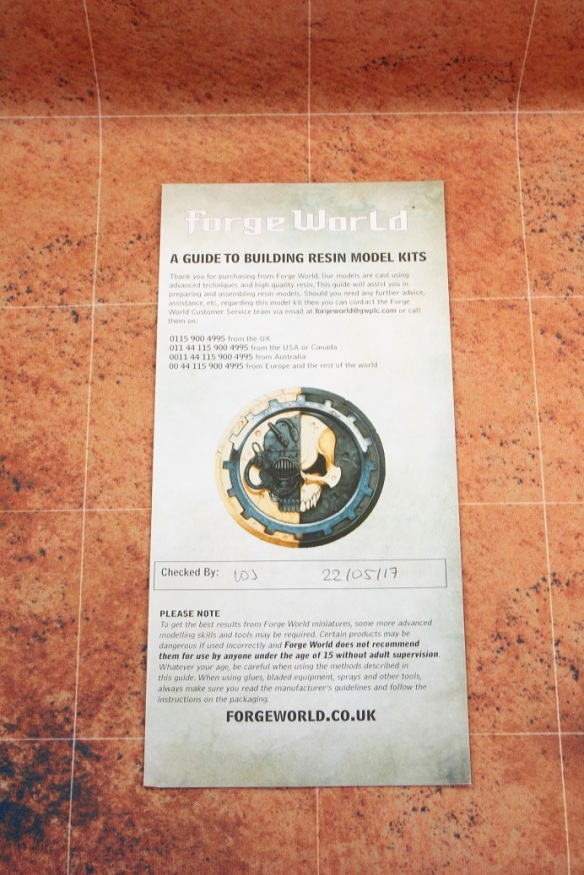 Like other Forge World boxes, you get the standard Guide to Building Resin Model Kits pamphlet. 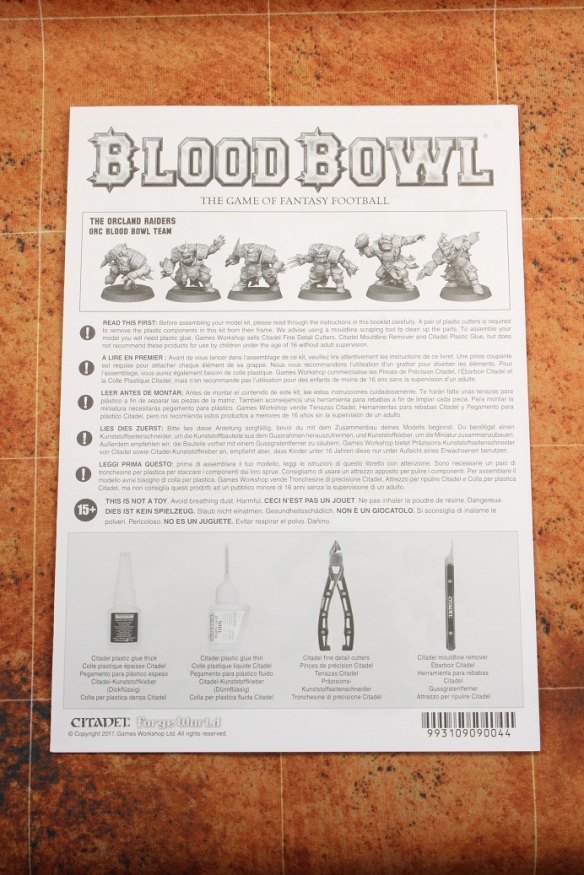 You also get the four-page assembly insert. The first page has information about necessary tools and whatnot. 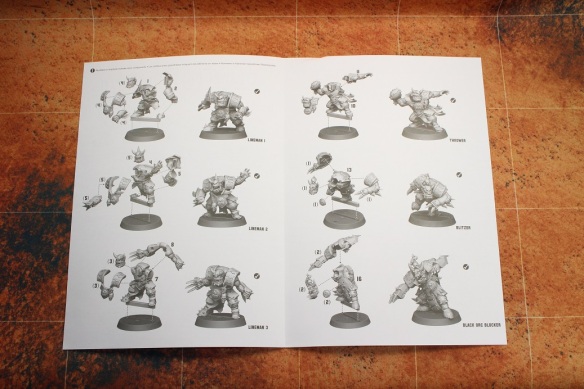 Opening the insert shows you the assembly instructions for the minis. Like the standard Orc team, the new Orcland Raiders come with two copies of six individual sculpts. Three different linemen, and one each of the Black Orcs, Blitzers, and Throwers. As others have said before, I would have been happier with more repeated Lineman sculpts and fewer repeated positional sculpts, but I digress. 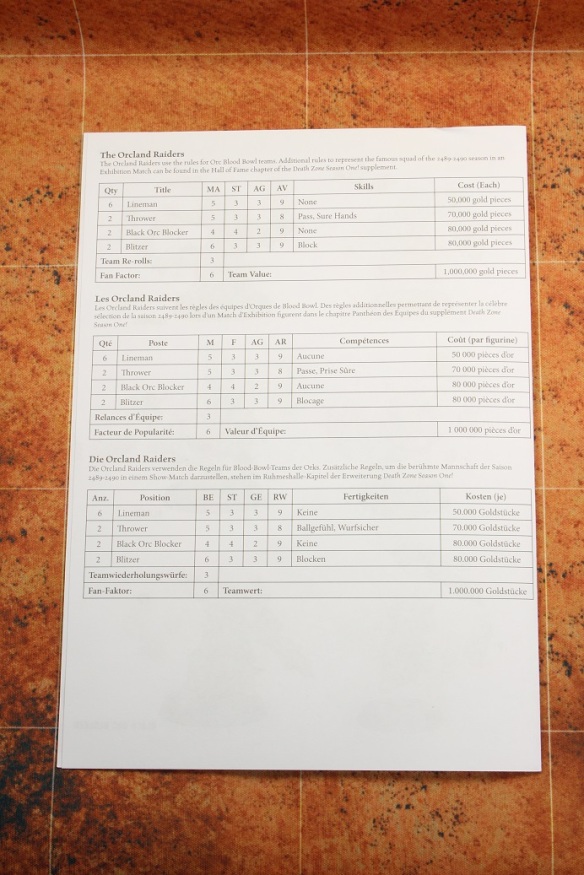 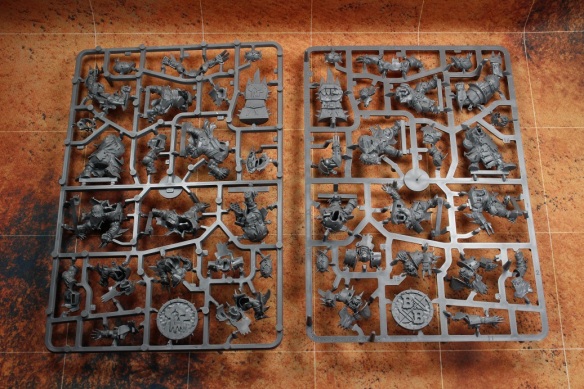 Inside the box, you get two Orc player sprues. These are the exact same sprues that come in the Blood Bowl boxed set, as well as the Gouged Eye team box. Along with the players, the sprues contain two coin counters, two fist counters, and six different footballs. 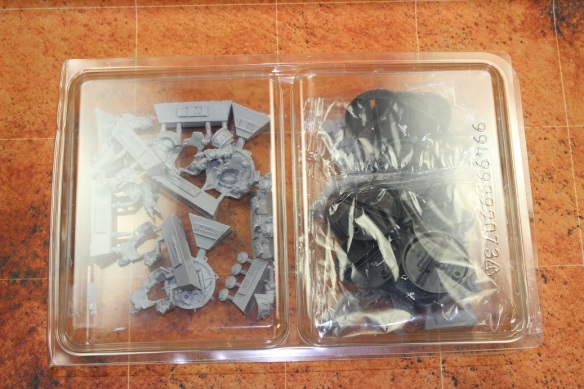 Like the Bright Crusaders box, the Orcland Raiders box also contains a plastic clam shell with twelves slotted bases, as well as the resin pieces to add the Raiders look to the existing minis. 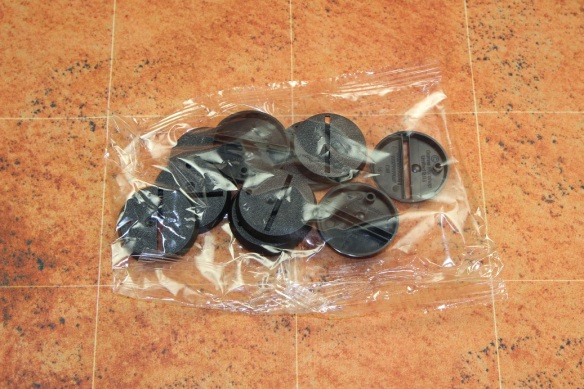 The bag of slotted bases. 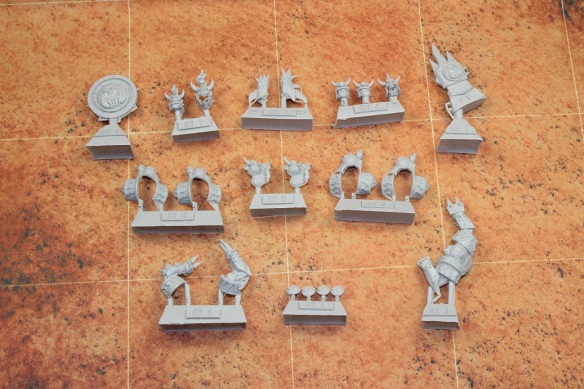 Here is a picture of one set of the resin pieces. The Orcland Raiders box contains two sets of these pieces. 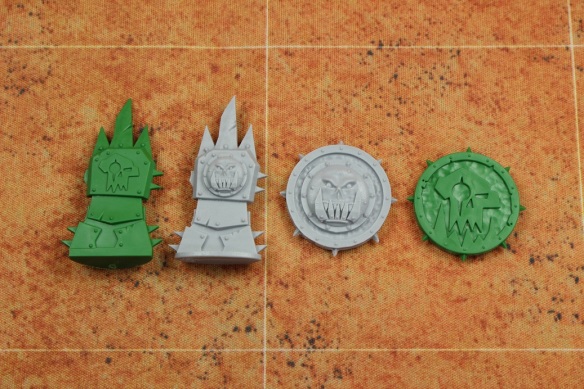 Here are the Orcland Raiders counters next to the Gouged Eye counters. I am only showing one side because the flip side of both counters are the same. This is the only side of each counter that is different from the others.

Next up are the players. I am not going to post pictures of each mini being built, because that would just be a LOT of pictures. Instead, I am posting pictures of each of the Orcland Raider minis next to their Gouged Eye counterparts. 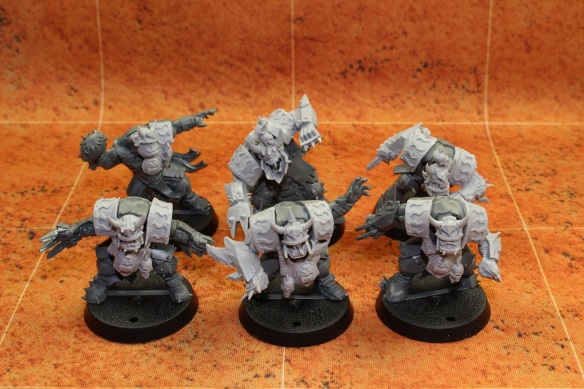 A group shot of each of the different sculpts. 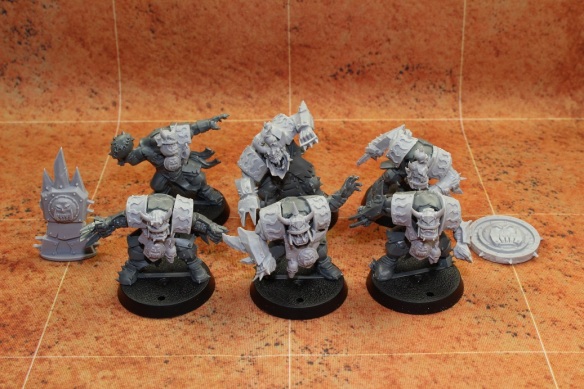 A group shot including the counters.

So… at the end of the day, will the new Orcland Raiders replace my classic 3rd edition team? Nope. I think the minis are good, but even with the added versatility of the resin bits, there are still too many pieces that look the same as all the others to replace my old team with only a couple of repeated sculpts.

The minis themselves are pretty decent. Some of the resin pieces were near flawless, while others had a few nasty mold lines. On top of that, the resin pieces did not always fit to the original plastic pieces as well as the Bright Crusaders pieces did. The fits were not exactly bad, but several of them will require a bit of green stuff to smooth out. In the end, I will probably do the same thing with these minis as I intend to do with the Crusaders set. Instead of using them to make a completely separate team, I will most likely use them to add a little more variation to a single Orc team. From a monetary standpoint, I really wish you could order JUST the resin pieces to add to the minis that came in the boxed set, but unfortunately that is just not an option.

What do you think? Do you wish you could get the resin pieces separately? Do you plan on picking up the Orcland Raiders set too?