Well, it’s been a couple of weeks since the previous post about painting my Delaque gang, so I thought I would check in. Admittedly, there has been very little progress. Between the sprained wrist, which is healing slowly but surely, and the drama of Hurricane-pocalypse here in Texas this week, there really hasn’t been much time for painting. I did, however, get about an hour or so to paint this afternoon… after the power came back on at the house.

On top of everything else, my painting session did get cut a little short, as watching the season finale of Game of Thrones was pretty much a must in our house. In the brief amount of time I had to paint today, I pretty much just managed to paint up a few more trench coats. 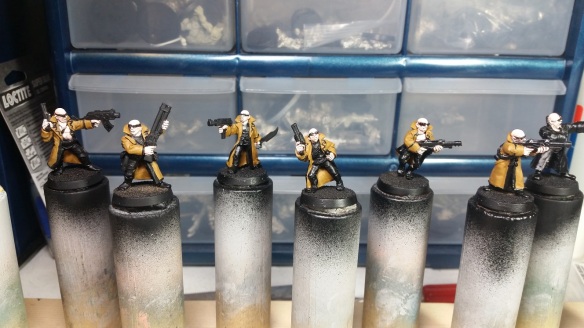 Here is a picture of the whole gang. Once all the coats are done, it will be time to move on to the shirt, pants, and boots. In hindsight, I probably should have done those before the trench coats as they are a lower layer than the coats, but it’s too late now.

I know this isn’t much of an update, but I wanted to keep my word and continue posting as regularly as possible. Keeping up with the posts should help keep me focused on getting the painting done, and now that my wrist feels a little better, I should be able to get more done.

I had originally intended to finally pick back up on my 6th edition Games Workshop Skaven team once the Delaques were done, but with the arrival of my Shadow War: Armageddon boxed set, plus the awesome gaming mat from Deep-Cut Studio, I think all things Shadow War and Necromunda are in my immediate future.

Well, that’s it for today. I will leave you with one final goodie that arrived in the mail today as it relays directly to the topic of this post.

I think I will skip the minis in the Shadow War box and go straight to these minis for my first kill team. I don’t know anything about this faction, or how well they perform in Shadow War, I just REALLY like the way they look!