This week’s Inside the Studio featured White Dwarf staff writer Dan Harden previewing with Ceri the June edition of White Dwarf which is out tomorrow (or for you folks with subscriptions, you might even have it today!). Let’s take a peek at what’s under the cover then.

And it should come as no surprise that with the release of Age of Sigmar 2nd edition and the Soul Wars box set that it’s the magazine’s primary coverage. White Dwarf even ditches its usual format a bit this month and kicks off with an AoS spread on the inside cover. And Dan looks really intense about it in the above screenshot. A big focus of the new edition is expanding the lore of the mortal realms. It also features an update about where the story is at in the AoS timeline, who’s up to what, etc. And there’s lots of maps! Dan says all the maps of the mortal realms really increases the scope of the game. After the White Dwarf table of contents the coverage of Soul Wars begins.

Blurry screenshot of Dan showing off a page of models from Soul Wars. Is there a White Dwarf reveal of models we haven’t seen online yet?

There’s a feature on the new Imperial Knights for 40k as well as the new armiger knights that are coming out. Dan flips through lots of pages at various parts of the interview, so unfortunately it’s not a page by page breakdown of the issue.

The main battle report is, surprise, focused on Age of Sigmar. The battle report (the first of two in the issue) uses the new scenarios, rules and models from the box set as you would imagine. Warhammer Live experienced some audio difficulties at this point, only playing some serene fantasy music while Dan and Ceri drew red lines circling various parts of the above shot, which of course no one knew what they were saying … 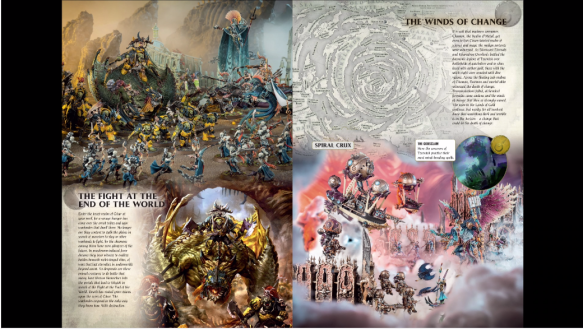 Obligatory Page 5 request … you can see in the upper right corner a portion of the map, which is the Realm of Metal. And the little dot was where the Realmgat Wars took place. This is an example of what Dan said earlier about the maps increasing the scope of Age of Sigmar and giving your battles a sense of scale in the greater world of the mortal realms.

The next feature previewed was the second part of the Golden Demon Winners Challenge. Winners of the competition were invited to Warhammer World and create a diorama around the four different grand alliances. Instead of a competition it’s the hobbyists showing of their work and sharing insights of what went into their process. 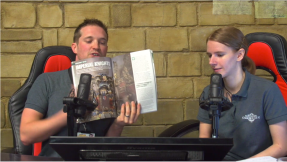 Next up was “the big one” literally, imperial knights. It features designers notes on Imperial Knights, not just the new ones. The designers talk about the process of designing the concept and bringing the models to life. As well as the background of the models, so not just what they look like but why like having three toes for speed on the god machine rather than four toes for stability, as just an example. 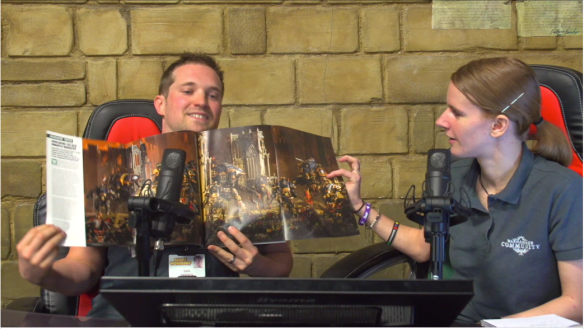 And a foldout centerfold … sexy!

After the knights feature is a short story by Josh Reynolds from Soul Wars to help give the feel for the setting of the Soul Wars box set. Dan describes the new fiction gets a little more sinister and darkness compared to the first edition of Age of Sigmar, which was about the brightness and hope as the stormcast eternals waged their offensive on chaos. Now it gets a little darker as Nagash and his forces strike back and play a bigger part in the developing AoS narrative. Josh’s new book Soul Wars will also be out soon. 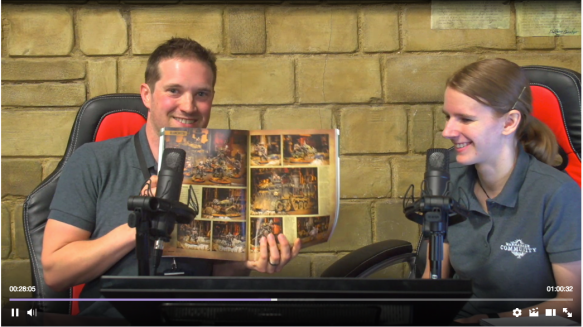 Next up is one of my favorite bits of White Dwarf, Blanchitsu! This month continues with a look at the brilliant models in the Tor Megiddo setting.

Recent months in White Dwarf have included miniatures designers discussing what makes for a great model and nominating a favorite miniature to include in the Hall of Fame. This month they switch things up by talking to the current crop of GW artists and what makes for great artwork and nominate a favorite piece to the Hall of Fame. I’m a big fan of the classics like John Blance, Ian Miller, Wayne Newton, etc, but I’ll admit Kevin Chin has really impressed me lately, especially with his work on Warhammer Quest: Silver Tower and the Tzeentch book.

The second battle report of the issue is the remaking of a White Dwarf classic, Battle of Glazers Creek, which was actually published 20 years ago to the month in a previous White Dwarf. Dan himself partook in the battle report along with Warhammer TV painting guru Chris Peach. The battle features Peachy’s brilliantly converted customer 24th Ventrillian Dragons. Dan has included new rules in the report so you can play it yourself at home, which is pretty cool. Peachy’s army is really something to look at, what a cool force. 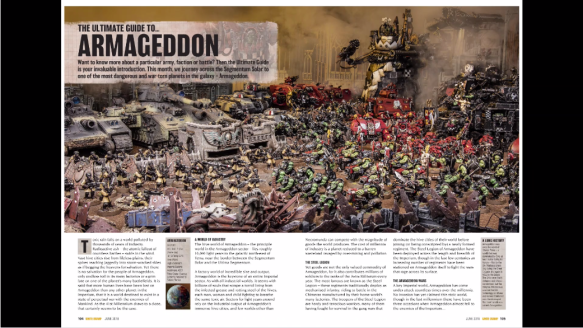 And speaking of orks vs. guardsmen the June’s Ultimate Guide is Armageddon featuring the … well … ultimate to everyone’s favorite wartorn planet. Dan put in a lot of research for this article going through every old book and pamphlet you could find that had to do with the planet.

Next continues the Tale of Four Warlords, if you’ve been following that you can see what they’ve been working on, mostly big creatures this month.

Temporal distort goes back in to White Dwarf ages past … issue 222 in which the original Glazer’s Greek came out, June 1998. Originally when the feature was planned the White Dwarf team didn’t know Soul Wars would be coming out, but they managed to fit the two battle reports together.

Next up an update from Middle-earth! Yay! Dan mentions Jay Clare has an article about customizing your campaigns and even includes a new scenario. Dan says the White Dwarf team has been making an effort to include more from the MESBG team, and I can say it’s one of my favorite parts lately as I’m a big fan of the game. No shots of the spread though 😦 Ceri does make a nice shout out to the Tale of Four Warlords they’ve been doing for MESBG on Warhammer Live. 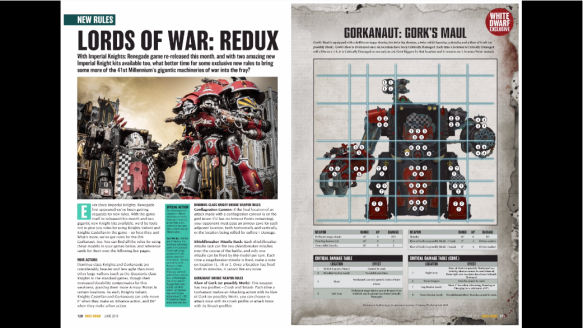 For you 40k nights lovers, you may have heard the new Renegades box set is coming out and Dan (on very short notice) wrote up some extra rules for the game that brings in three more models including an ork gorkanaut.

The rest of the magazine preview covered Readers’ Models and the In the Bunker sections with tips on how to get your photos published, White Dwarf’s new staff writer and some posters that will be included in the new issue with Soul Wars and imperial knights artwork.

Stay tuned to WS&TZ and watch for Jeff’s upcoming review of the issue as soon as he gets his hands on it.