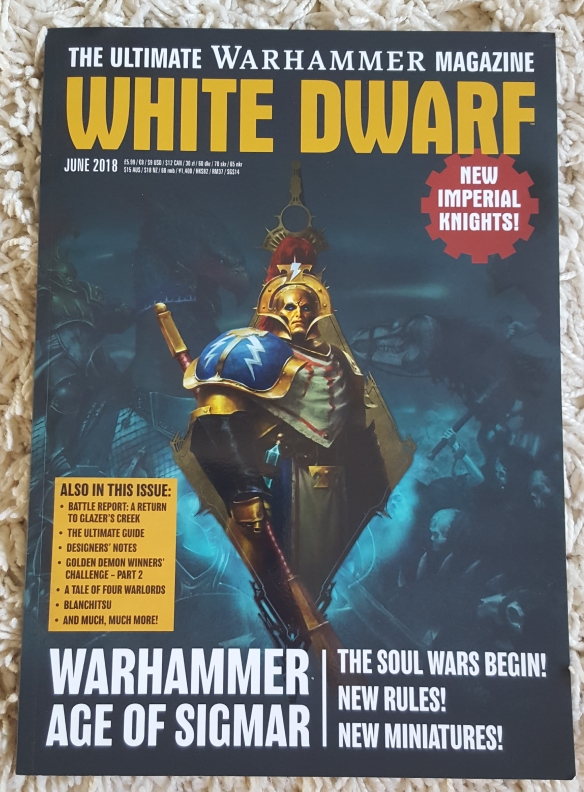 The Soul Wars have arrived in the Mortal Realms.

As to be expected, the June issue of Games Workshop’s house organ is dedicated to the launch of the new Age of Sigmar system and starter box set featuring a new Stormcast Eternal Chamber vs Nighthaunt. There’s also plenty on the upcoming Imperial Knights: Renegade box set. This left little room for any content for the Specialist Gamer.

Truth be told, even as an AoS player, this was probably one of the less useful issues of White Dwarf since the soft reboot back in September 2016. Plenty of images on the new AoS and Imperial Knight models, it had a bit of an advertisement feel. It is to be expected though with a release as important as a new edition of one of their two core lines. It does appear that GW is focusing more on the background and fluff of the Mortal Realms this time, and there is a neat little feature at the beginning summarizing what’s going on on each. The new models are gorgeous, but even more than that I find the cover of the new starter box and the core rulebook to be some of the most striking cover work GW has done to date. They are simple, yet evocative. Very well done! 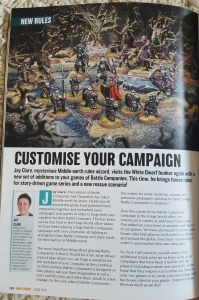 Anyway, we do have a little SG content this month. Lord of the Rings players are treated to an article on running Battle Company campaigns with some nice ideas and tips. There’s also another exclusive to White Dwarf scenario. I wonder if LotR will ever get an accessory or resource like the Open War deck for random scenario creation? I’m not a LotR gamer atm, so don’t know. In the meantime, these free scenarios are great.

Also, I’m not entirely sure where Imperial Knights: Renegades falls within the GW studio. Is it a SG game? Either way, I will mention that there are exclusive rules for a few big boys in this issue, so if you’re interested in that box of titans you definitely want to give this issue a look. 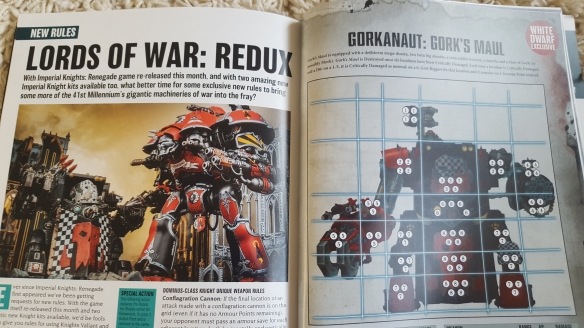 Oh, there’s a neat feature where artists did a 60mm challenge. They had to create a diorama on a 60mm round base. Two stand outs for me were the one with skeletons from the Shadespire Sepulchral Guard on a set of stairs and another where Alarielle is choking a fool with vines or something.

All in all, with little rules or variants, this may be one of the issues I pull off the shelf with less frequency than the others. It may be a case where I eventually give it away to a LotR gamer (Casey) as in a few months I’m sure I’ll have the new AoS starter, or at least Core book, so the information in here will be redundant.

Brief review this month, but here’s an interesting WD ad with a collection of ‘Order’ factions. Something has the stink of orruk about it… 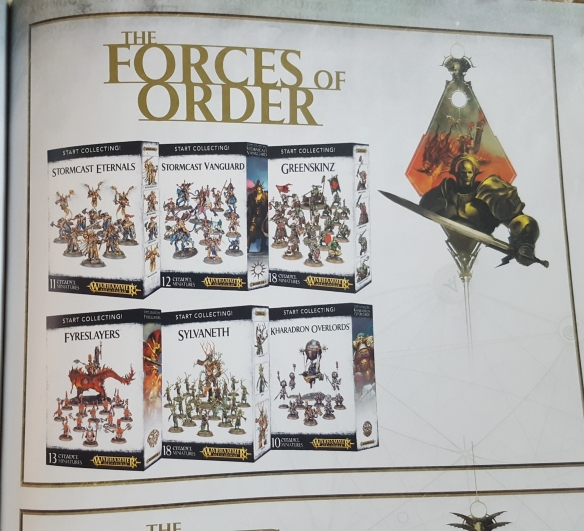