The Chamber’s Varghulf just flew in…

Splitting from the normal fluff, Lord Maulheart’s, of The Chamber of the Bloodied Dawn, Varghulf isn’t so feral and savage but a bit more…refined. I see our Varghulf as the cool, sharp dressed Destro to my abhorrent ghoul king’s shrill hissing Cobra Commander.

He’s converted from a FW Fimir Noble body, and spare crypt flayer parts I had left over from the FEC start collecting kit. I had a Fimir Noble laying in my bits box as I had dreams of a small Destruction Skirmish warband at some point. However, I could never find a satisfactory Varghulf model and that need was much greater. Also, those extra wings and such from my Flesh Eater Courts Start Collecting set were too cool not to use on something.

Another key reason to use that Fimir Noble body…that body is positioned in a hunched over pose. This was perfect as I use Portable Warfare APCs as my storage. These are great for handling about 1K pts of an Age of Sigmar force, but they aren’t very tall. With the large 60mm base Varghulfs generally perch on, I couldn’t lay the model sideways like most as the base is too big. That hunched position of the Fimir Noble though is perfect as it ducks under the top of the APC perfectly. I just needed to make sure the Crypt Flayer wings weren’t positioned in a vertical manner. In the end, I definitely think this necessity allowed for the creation of a sweet model and pose. Conveniently for my purpose, the Fimir’s clawed feet perfectly match the aesthetic I needed giving the model the same clawed toed look as the Crypt Horrors, but with a bit of a bat-like feel. 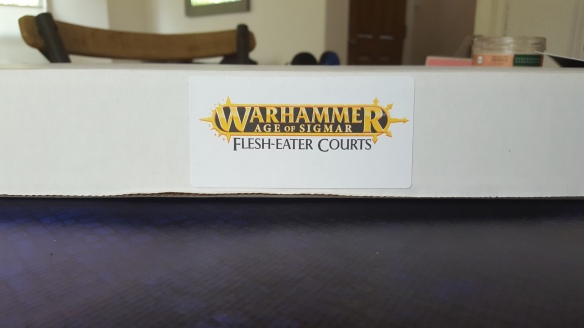 Not being an expert with greenstuff, I was able to use the Stormcast Eternal shoulder pads to cover the areas I used the binding putty to join the arms to the body. I know the Fimir Noble armour doesn’t quite match the look of the clean armour of Sigmar’s golden boys, but this army is a bit of a headcase, so even though the Varghulf has been awarded some Bloodied Dawn shoulder pads from Maulheart, he’s salvaged some ornate armour on his own. 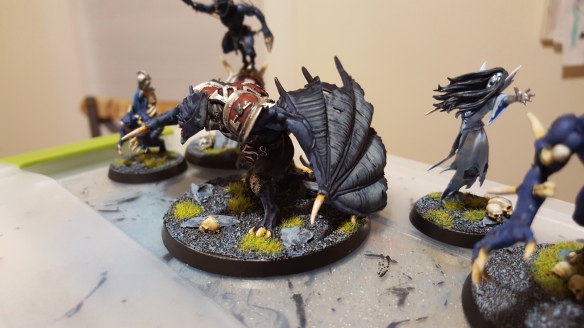 3 thoughts on “Age of Sigmar – Varghulf”