Diablo Bowl in Dallas is two weeks from today and as usual, things are coming down to the wire fore me. I managed to finish applying static grass to the latest group of minis that were on the table last night. I also started applying numbers to the minis that were already completed.

The water slide decals I am using for numbering are great. I got them from Bedlam Creations but unfortunately, I realized that a single set of numbers were not going to be enough to do the entire team. After doing the first few minis, I had to stop and order more from the Bedlam Creations site. Hopefully I will actually get them before Diablo Bowl gets here.

Since these are done, I based and primed a new round of minis last night. 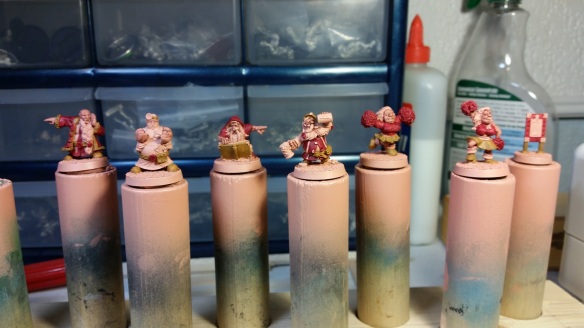 All side line miniatures this time. The two on the left as well as the sign on the far right are from Star Player Miniatures. Third from the right is the classic Games Workshop Dwarf cheerleader. Dead center is the Drunken Dwarf mini from Goblin Guild Miniatures. The last two are part of the Iron Golems Dwarf team as is the rest of the main team.

I just need to finish these minis, paint up my Vortice Miniatures Deathroller, and then try to whip together a display base… all in the next two weeks. No pressure…