Another tournament down… I attended Diablo Bowl yesterday and I finally made it home today. Lots of die were thrown, lots of cussing was heard, and a good time was had by all (for the most part). With thirteen coaches, it was a decent turnout for a newer tournament. The following is a quick rundown of my three matches:

(More pics of the team and trophies at the bottom)

Always an interesting match-up for Dwarves, my first game was against Kent Rafferty and his Dark Elves. Kent is a good guy and a good coach. I kicked off and as usual, the Dark Elves were able to score pretty quickly. I received the second kickoff and was able to power down field and score a late touchdown to tie things up. I received the kickoff to start the second half. The plan was to again work my way down field and stall out at the goal line and not leave enough time for the Dark Elves to pull a miracle touchdown. Everything was going according to plan until Kent managed some crazy dodging to get a single die Blitz on my ball carrier. He only rolled a push, but he chose to push my ball carrier into the end zone, thus ending my drive. With only two turns left, Kent and his Dark Elves got very elfy and were able to pull off the miracle touch down and tie up the game in the final turn.

Playing against Orcs is NEVER fun as a Dwarf coach. They use pretty much the exact same tactics, and have more strength to throw around. My opponent in this game was Jason Keller, who is a super nice guy. I chose to receive first this game, and the game went as Dwarves vs Orcs games usually go. It was ugly, slow, and LOTS of hits were thrown. Luckily for me, Jason was not used to playing against Dwarves, and thanks to Frenzy, I managed to crowd surf probably six of his players during our game. With mnumbers on my side, I was able to stall out and score on turn eight. Unfortunately for me, this gave him two chances in a row on his turn eight, and on the start of the second half to get all of his players out of the KO box and back onto the field. And that is exactly what happened. Also, the first hit he threw with his Troll on his turn eight managed to casualty one of my Blockers which left us with even numbers to start the second half. I held him off as long as I could, but his thrower was able to make a break for the end zone. He was well protected, but I had a lone Troll Slayer who had just enough movement to throw a single hit after two Go-For-It rolls. Unfortunately… one of those two rolls came up a one, and i was fresh out of re-rolls. Jason was able to stroll into the end zone for the tie on turn 14. I set up on a strong side to attempt a flat out run for the end zone and try a two-turn touchdown… which is not easy for Dwarves. Unfortunately for me, Jason managed to kick the ball directly into the back corner away from my strong side lineup. I had enough movement to get to the ball, but I failed my pass roll to get the ball to my next closest player, which pretty much ended the game for me.

I knew my third game was going to be tough. My opponent was Dean Piper who frequently finishes in the top three in regional tournaments, and classic Undead teams are always tough to beat in tournaments. Honestly, it was a long day, and I really do not remember too much about the specifics of the game beyond the fact that I scored the only touchdown of the game and finally picked up my only win of the day.

With two ties, I knew that I had no chance of placing in the top three, but I did manage to take home the Most Casualties award and my third Fan Favorite (Best Team) award. It was really nice to get the Fan Favorite award since I put so much effort into the team. There are definitely better painters around than me, but I am pretty proud of what I managed with this team. Now for the important part… the pictures!

I am still figuring out my new Canon DSLR, so I was not able to get the camera to focus on more than a single line of minis at a time, yet. So, the upside to not being able to figure that out is that I had to take a lot of pics of the team to get everyone in focus. Enjoy! 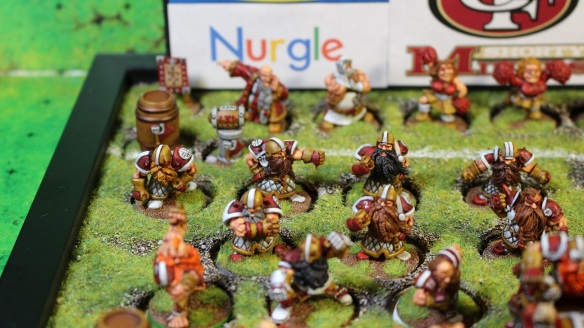 I did not realize until setting the team up for Fan Favorite voting that I actually forgot to paint the metal bands on the giant barrel here… I will have to remedy that later.