After fairly regular begging on interwebs forums and the Facebook Blood Bowl group, I have FINALLY managed to get my hands on a Grak and Crumbleberry set. Grak and Crumbleberry were only available to purchase from Warhammer World in Nottingham and since I live in Texas, there was no way I was getting my hands on them without help. They arrived in the mail today and it is time for another unboxing!

There is quite a bit of complaining and bickering surrounding Grak and Crumbleberry across the internet. Both in terms of the difficulty in purchasing the minis, and their highly controversial rules. Honestly, I am not really interested in getting caught up in all of that. I am happy to see new Blood Bowl minis to add to the collection, so that is what this post will focus on.

The packaging is pretty much identical to the other Star Players released from the Forge World studio.

As you can see, the minis are Forge World resin, not plastic. 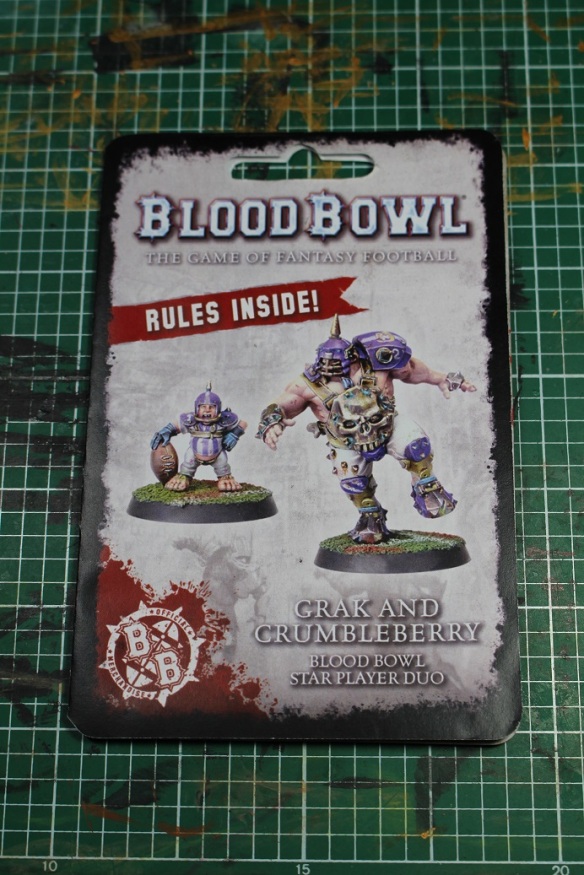 Like the other Star Player sets, inside of the packing is a small booklet.

There are a couple of differences between the booklet for this set and previous Star Players. The first is that there is no fluff contained in the booklet. That is slightly disappointing, but not the end of the world. More on the second difference in a minute. 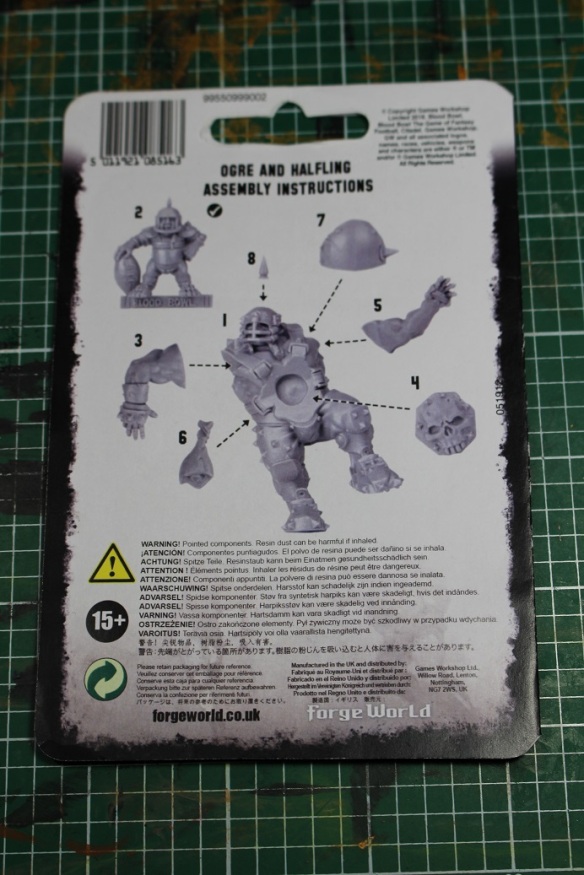 As you might expect, on the back of the booklet are the assembly instructions for Grak. They did not go crazy with the number of pieces for Grak. This should be a fairly easy mini to assemble.

This insert is the second difference between the Grak and Crumbleberry booklet, and previous booklets. It looks like one of the standard Blood Bowl game cards.

On the back of the insert is the description for the new skill, Kick Team-Mate. Again, there is quite a bit of controversy online regarding this skill. Again, I will not get into it as I do not get bent out of shape by minor rule changes/additions to the game.

The package comes with four 32mm bases. Two slotted bases with mounting holes for the footballs, and two non-slotted standard bases. As there is no base tab on either minis, I will be using the standard bases for both minis.

I forgot to take a pic of Crumbleberry before cutting it off of the sprue block, but there was not much to show. Crumbleberry was a single piece mini, which I was fairly happy about. 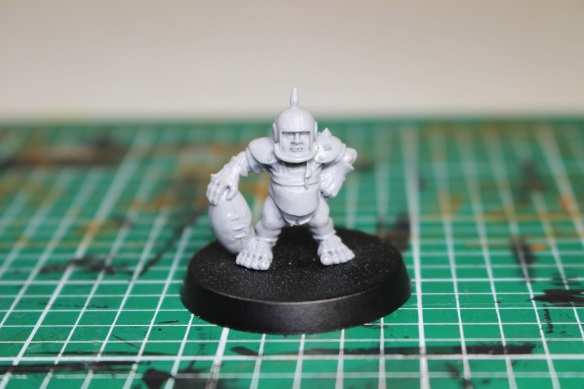 Crumbleberry glued to his base. The base is a LITTLE big for a Halfling, but it is not TOO bad. The mini has a nice sculpt and is a nice cast. There was only one small noticeable mold line, on Crumbleberry, but it was very easily removed. On to Grak!

The head, legs, and torso are all one piece, which is a nice change of pace from other recent minis. 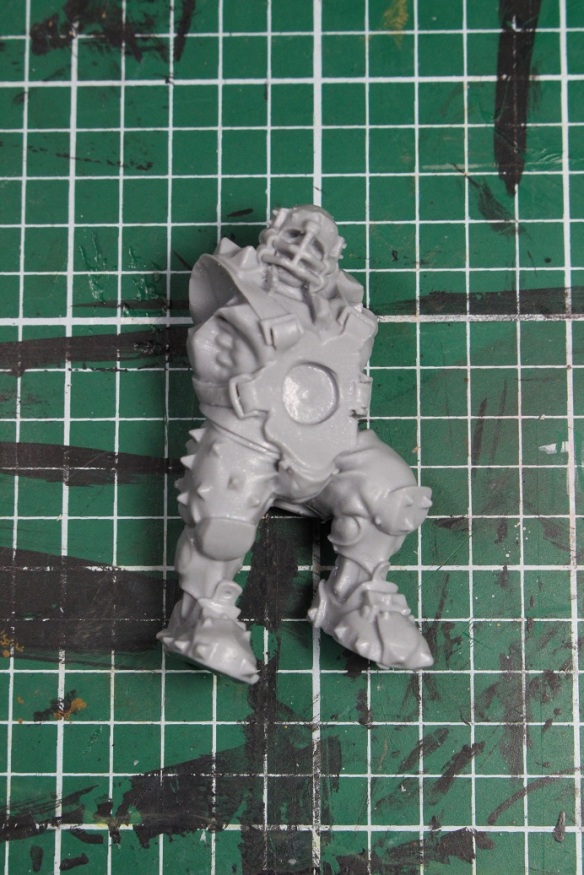 It came off of the sprue block really easily. Time to start assembling. 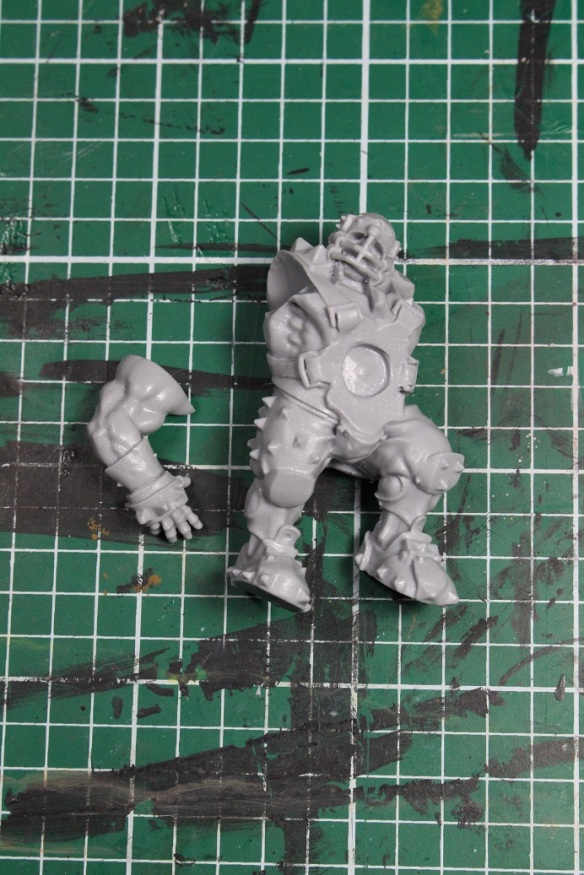 The first piece that needs to be attached is the right arm. 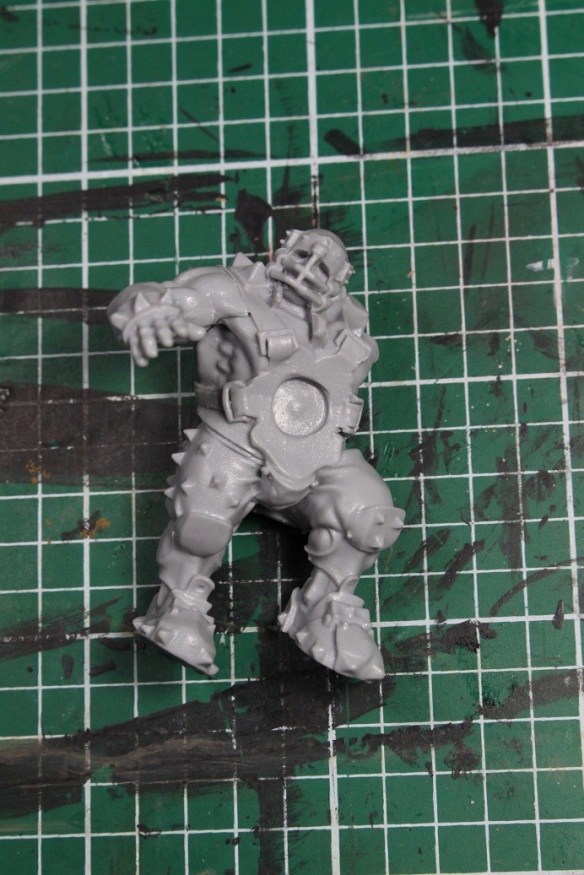 The arm attached quite easily, with only a small seam along the joint. The seam will be covered with green stuff easily.

The next piece to be attached is the skull plate that goes on the torso.

A little trimming was required on the back side of the plate to get it to sit correctly, but it went on easily enough.

The left arm goes on next.

This was probably the most challenging piece to attach to the mini. It took a little bit of trimming and filing to get it to sit properly, and even then there was a larger gap than I would have preferred. The gap bugging me until I remembered… 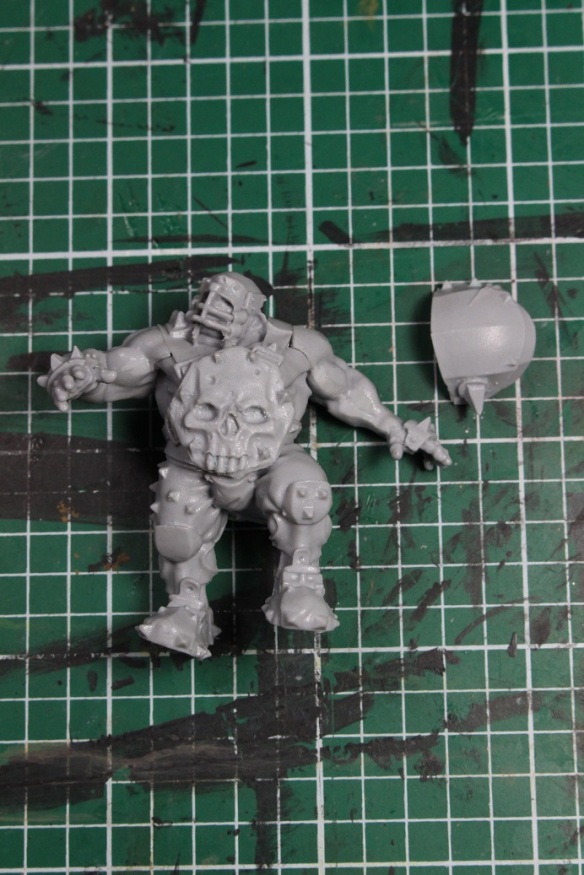 The shoulder pad covers up the problem area, and leaves only a small visible area of a visible gap. It was easily attached and it fit onto the mini well. 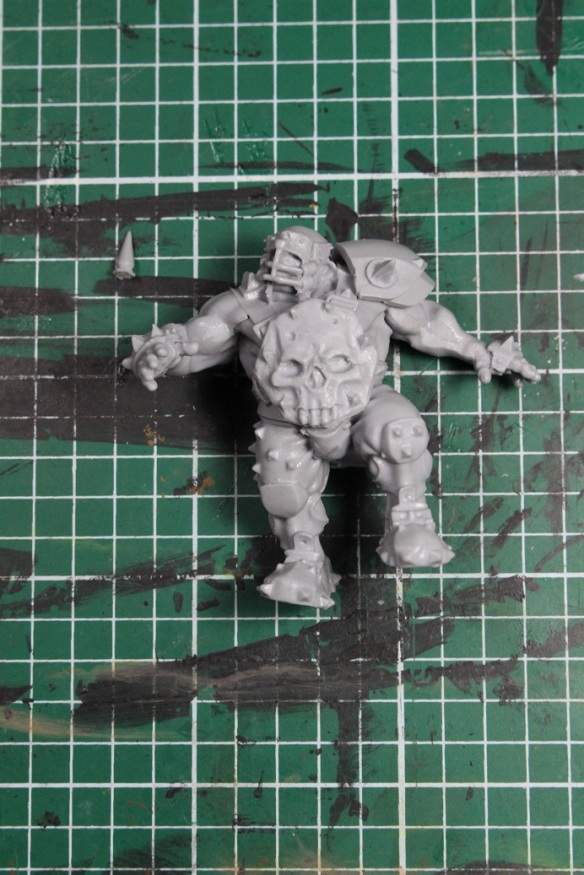 What good is a helmet, without a nice pointy spike to go on top?

This appears to be a big hunk of ham or something similar. According to the instructions, it appears to attach to the back of Grak, but I decided to leave it off the mini. I did not feel like it added anything to the mini, and there did not seem to be any downside to not attaching it. There were no holes or other visible attachment points on the back of Grak. It just was not needed, so it did not get included on my Grak.

With that, Grak is now complete. All in all, the assembly went fairly easily. Grak had a few obvious mold lines on the arms, and legs, but it only took a little bit of filing and trimming to take care of those.

Here is the pair together. Honestly, I like these minis. Both are nice sculpts with good casts and reasonable mold lines that were easily removed. Being an Ogre, Grak could be used as a standard Human team Ogre, or possibly even as a Morg ‘n’ Thorg if you are not a fan of the Official Morg mini. If we ever get an official new Halfling team, hopefully Crumbleberry will fit right in with the rest of that team as well.

While these minis are not “must have” minis, and considering the difficulty in acquiring them, thank goodness they are not, they are minis that I am happy to add to the collection. I will likely never use them as they were originally intended as I am unlikely to find any league or tournament where they are legal, but they will definitely take their place in the glass display case.

To close the post out, here are the obligatory size comparison shots of the pair.

Grak and the new Human team Ogre. Grak is leaning a little farther, so his shoulder is higher, but they are pretty much the same size overall.

Their bulk is also very close in size.

Side by side shot of Grak and the 3rd edition Morg. Again, Grak is only a little taller than Morg, though he is quite a bit bulkier.

Well, that is all for this post. I would like to send out a huge thanks to Talk Fantasy Football member, eldritchfox for helping me finally get my hands on these minis. I was starting to wonder if it was ever going to happen. If you are still looking to get your hands on these minis, keep plugging away online. Eventually, someone will hopefully help you out as well.

4 thoughts on “I Finally Got My Hands On Grak And Crumbleberry!”