AKA The New Goblin Team Unboxing

Well… it has been a while since my last post. What can I say? Motivation is hard to come by when you are in pain. Anyway, today’s post is a slightly belated Goblin team unboxing. The team came out a few weeks ago, along with the Death Zone Season 2 rule book. You may have seen a number of unboxing posts by now, but how about one more?!

Like other Blood Bowl teams, the Goblin team comes with twelve minis using six unique sculpts. What the Goblin team does that is a little different is all the heads are fully interchangeable. This is a nice break from previous teams as it allows for a little more customization with minimal conversion effort. Anyway, time to get this thing started.

Apologies in advance for the crazy crooked pictures in this post… I have no idea what the heck happened here.

The box is more of the same of what we have been getting with the recent releases. That is a good thing as the art on the boxes have been really nice.

Again, like other teams, the Goblin box comes with a booklet with information about the minis and the team rules.

The instructions were clear and assembly was a snap.

You do not get the full team rules without buying Death Zone Season 2, but you get an abridged set of rules for the minis included in the box. Rules for Trolls and Secret Weapons sold separately!

There are lots of good decals on the transfer sheet. Good options for customizing the look of your team.

The sprues for the Goblin team are a bit smaller than other teams and instead of being loose inside the box, they come in this clam shell plastic case.

Not surprisingly, twelve plastic 32mm slotted bases are included. On a side note, if anyone needs more of these 32mm slotted bases to use on their older Blood Bowl minis, they are now for sale separately on the Games Workshop site.

Inside the box are four sprues, including two copies of two individual sprues. 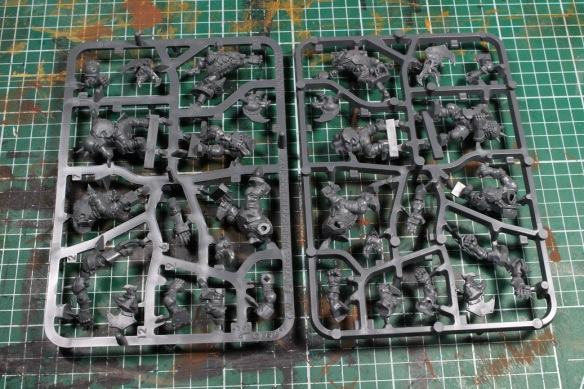 The second set of sprues…

Lets start assembling some Goblins! Being so small, the Goblin minis are mostly three or four pieces, so they go together pretty easily. For the first set of Goblins, I used the heads shown in the instructions for each mini, and did not swap any for customization.

The first Goblin of the team.

Half of the Goblin sculpts assembled now.

The should pretty much cover all the individual sculpts. It is worth noting that there is actually a seventh Goblin head on the sprue for just a little bit more customization. 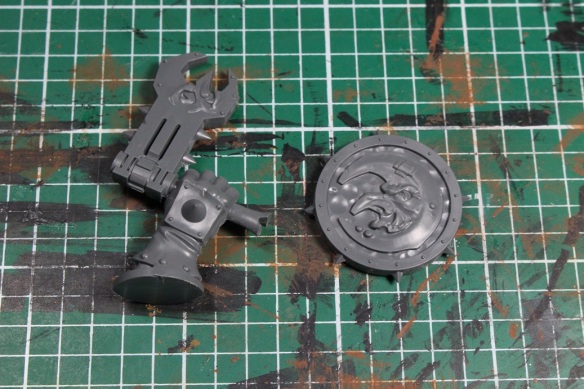 As you might expect, there are two of each counter in the box.

There are also two copies of three different footballs for six total balls, including my favorite ball of the game, so far. The ball in the middle is actually a Goblin disguised as a ball… which I think is hilarious and totally fitting for a Goblin team. 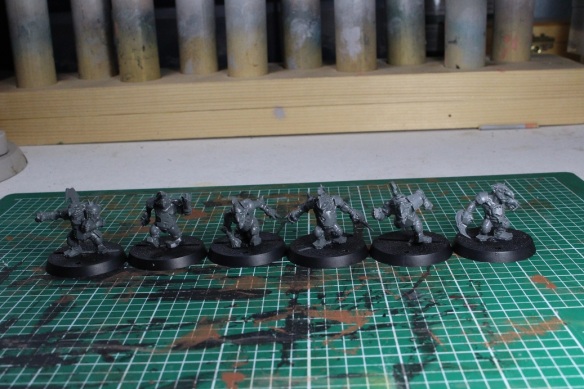 Here is a nice group shot of all six minis lined up. 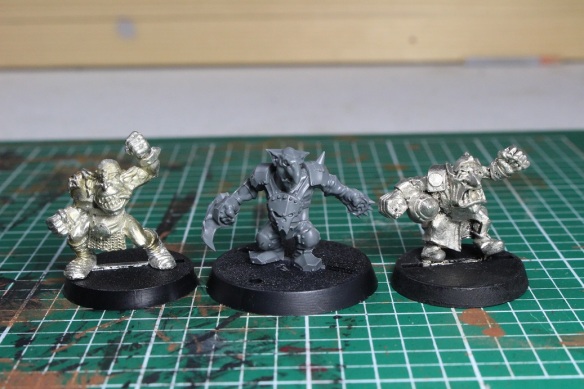 Here is one of the new Goblins next to a 3rd edition Goblin and the Goblin from the original Games Workshop 5th edition Ogre team. As you can see, the new Goblin is a little taller than the previous versions.

Overall, I like the new team. I think my only minor gripe is that they are awfully well armored for a team full of AV7 players. With the amount of armor they have on, they look a little more like small Orcs than Goblins, but that is something I can deal with.

The Goblin Secret Weapons pack went on pre-order on the Forge World website today, so between ordering that, and buying two sets of the Goblin team, I should have enough minis for a Goblin team, filling out the Orc roster, and getting an Underworld team started. I will need to pick up a couple of extra Trolls, but my Goblin team is off to a good start.

On a final note, I will do my best not to let my motivation fail me again… in the next week or so. 🙂

4 thoughts on “Better Late Than Never”