There is no denying that the Games Workshop Vampire team is one of the most iconic of all the teams they have produced.  One also can’t disagree with the statement that the style of Blood Bowl has been evolving over the years and alas, the teams of old have been coming up, well, short.  So what does a coach do when he finds that his classic team of yore now looks like a high school team lining up against the New York Giants?  As it turns out Willy Miniatures has a solution.

I find it ironic that the chief complaint against Willy Miniatures and most 3rd party vendors for many years were the concerns of scale.  The question of scale has always been a polarizing topic amongst players.  Some look to the 28mm scale as the equivalent of the gold standard of Blood Bowl.  I can’t recall how many message board conversations I’ve seen follow this scenario:

Vendor:  Check out my new team

BB Fan:  Wow, that is the greatest team of I’ve ever seen sculpted!  What is the scale?

BB Fan:  I will never buy it, you’re a horrible human being

Obviously that is a gross exaggeration in jest, but even I’ll admit in my checkered past I often derided teams solely over their scale.  Off the top of my head I can think of at least 4 full teams I purchased and eventually eBayed due to models breaking the sacred 28mm barrier.  What caused me to eventually become less concerned with scale was when I actually got down and played a season using the 5th edition metal human team from GW.  A fantastic team as a whole but the scale of the players is all over the place.  Seeing that team lined up against classic 3rd edition models I realized that I didn’t even notice while playing that some of my players were taller than the 28mm standard.  Later I played in two tournaments after the release of BB 2016 where I noticed that my Khemri skeletons looked just as fine against the new plastic teams.  Finally liberated from the 28mm glass ceiling, my eyes began prowling the internet looking for those shinny new teams that were once considered the forbidden fruit. 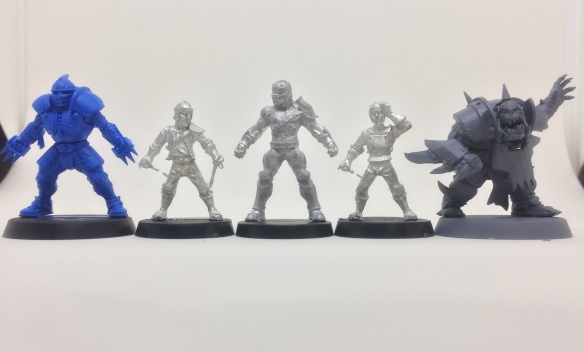 While I’ve never played a vampire team nor actually gotten to play against one in the flesh, I’ve always liked the idea of the team and eventually paid a small fortune to acquire a new in the box set.  I have always been a fan of the Willy Miniatures Vampire team for it’s similar designed armor on the vampires but despite the desire to own it I dismissed it do to the size of the players.  After pooling together some hard earned eBay profits I finally committed to ordering the team this past summer complete with all the bells and whistles.  Willy Miniatures is located in Spain so shipping is not overnight, but low and behold it was not long before I received a nice new package in the mail.

The blinds helped give this picture some sinister lighting

The use of the team boxes seems to be the latest craze for Fantasy Football teams produced on the open market.  While the box provided doesn’t have a storage container on the inside it is a nice touch and the overall presentation is very professional. For my order I went with the full 16 player vampire team along with the vampire lord/star player and the cheerleader.  All the models arrived packed nicely in the box.  On to the contents! 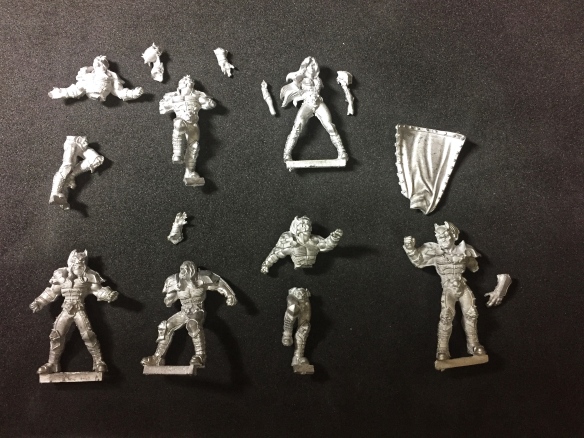 Now I will admit that the one feature I am not a fan of across the board with all model makers is when models are cut in half at the waist.  In my experience I’ve always had difficulty getting a smooth connection between the halves of the models.  Now I’m not sure if there is something that I’m doing wrong during assembly or if this is just something that comes with metal models.  That being said I was a bit heart broken when I pulled out the vampire models and two had the dreaded waist split.  That aside the metal production was generally very good with very minimal mold lines.  The one exception was the Vampire Lord that had some bad venting on his right arm that had an annoying amount of offset.  Fixable, but certainly a bit annoying to deal with.

After the vampires it was time to move on to the Thralls.  Four more waist splits awaited me there, much to my sorrow, but they were free of mold lines and the sculpting was good.  There is a good variety of poses offered by the thralls to include a freshly bitten one down on his knees.  Perhaps not the most sporting of poses but he has a nice bite mark sculpted on his neck just asking for some Blood paint!

Lastly was a few markers and bases that came in the box.  The markers are generic and don’t fit any particular team but the fact that you can paint them up to match your team colors is rather nice.  The bases provided are the size of the new GW bases yet they suffer from not have the slot punched out.  This might actually work better for the team because some of the models are one footed and don’t have a full tab to insert.  For the purposes of this review I used the old sized Blood Bowl bases for ease of getting the team picture ready.  Up first was putting the team together 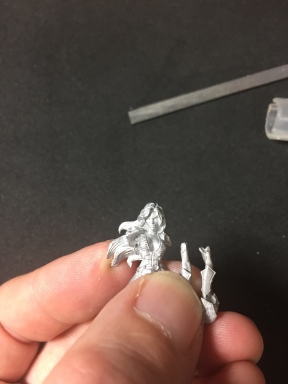 There were only a couple of issues when it came to actual assembly.  First the female vampire has very small contact points for her arms.  To add some extra stability I arranged her arm carrying the helmet to have the helmet touching her leg so there was a second glue point.  This left a small gap at the top of the arm that will require some green stuff to fill in.  The other issue I ran into was my old nemesis the torso divide.  Seriously, why do these things never line up!  Perhaps I am just being too demanding and paint will make it less noticeable but some of the connections are just unsatisfying.  I will revisit the models again to see if I can correct the issue.  As for the models themselves, I was very pleased with the design and molding.  The poses are great for Fantasy Football and are leaps and bounds over the static poses of the old GW team.  Here is how the vampires turned out: 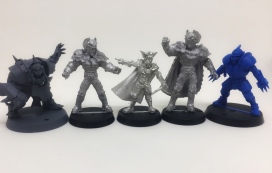 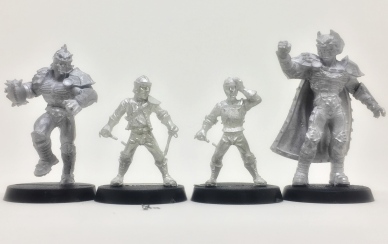 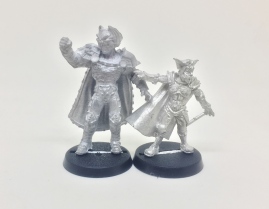 So it’s obvious from the pictures that the vampire Lord is a giant.  Having him on the smaller base probably makes it more pronounced but overall I don’t think its an issue.  The model is meant to represent a Strength 5 model so having him a head taller than the rest makes that stat believable.  The models have great detail and with the exception of the aforementioned issue with the Lord’s arm there was only minimal flash to deal with, just mostly on the finger tips.  With the vampires put together it was time to move on to the Thralls.

These guys went together quick with little work to do.  I don’t recall experiencing a single bit of flash on the models.  One of the thralls most definitely is going to require a larger base to get him to fit on, but the rest have no issues.  I know some people have complained of the lack of clothing on these guys most especially the shorts instead of pants.  It does seem an odd choice of clothing to take on the field but it certainly highlights their low armor score.  They do have a consistent uniform look though that the classic Vampire team lacked with the thralls.  The helmets that most of them wear are a good design and give them a good sinister look.  The final component to check out was the cheerleader. 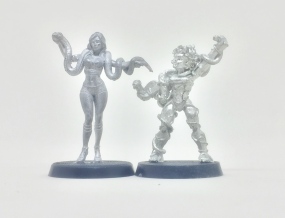 The cheerleader of old is a hot mess compared to the offering from Willy Miniatures.  The Willy model is a single piece model so there was only the matter of getting her on a base.  She appears to be suffering from a condition known as ‘legs that go all the way up’.  My one complaint about the model is that she has a sculpted ‘V’ on her chest.  While not really a issue I’m rather particular with my teams and if I don’t have the letter ‘v’ in the name I’m not really sure why a cheerleader would be sporting one.  A small quibble but I paid for the team so I get to complain.

So at the end of the day how does the team stack up?

A note about the cost.  Since this is a European product it sells in Euro’s which puts me at a disadvantage off the bat for cost.  Since my purchase it does appear that Willy Miniatures has lowered the price of their teams by 20.00 euro, and is now selling the base team at 79.95.  While still for non-Euro countries this is on the high end it is rather nice of them to drop the price.  Nicer if it had happened a month before I ordered instead of after but either way it makes the team competitive.  If you follow the crowdfunding market much you’ll know that Willy Miniatures routinely is offering new teams and they sometimes offer existing teams at a discount during those times, something to considered if funds are tight.

In conclusion I find the Willy Vampires to be superior enough over the classic team to go ahead and send my old team off to a new home. (Thanks, James! – Mike)  While the old team scale is irrelevant at the end of the day, the design of Willy Miniatures is just too superior to those old figures.  My favorite model of the team has to be the vampire holding the football.  I think it highlights well the high agility of the players, something old designs didn’t do.  I’d like to get paint on these guys at some point, maybe before we hit the 20’s, only time will tell.  Speaking of painting, I should have a painting update coming soon on my Undead team.  Stay tuned!

5 thoughts on “Off the Beaten Pitch: Willy Miniatures Vampire Team”