I haven’t regularly used Star Players in league or tournament play in a very long time.  Back in the original 3rd edition rules Star Players where much cheaper than they currently are so it was quite common to see them in play.  When I attended the first Blood Bowl Tournament at GW Nottingham it was a staple to see all the big names on just about every team at the tournament.  In fact my Chaos Dwarf team rocked Hthark The Unstoppable through it’s first several tournaments.  I’m pretty sure every Undead team I played against had Count Luthor and every human team had Griff.  They were so cheap it would have been ridiculous not to use them.  A few iterations of rules later and taking those guys now is a huge commitment so its rare to see such big names on the field.  Some tournaments though have adopted homemade heroes which has given me the opportunity to create some of my own Blood Bowl Stars. Harry Badsaw, an orc thrower that was part of the Both Down Orclahoma Bowl competition.   Now thematically he didn’t fit with my team at all as I was taking a Khemri team, but since I had the model for over 10 years and hadn’t gotten around to painting him I figured it was a great opportunity to finally put the model to use. 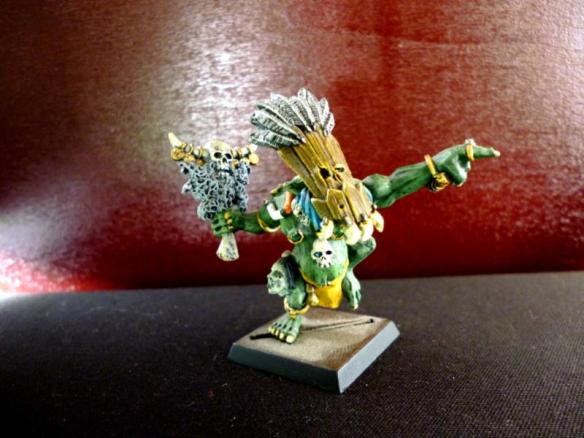 90% of the model comes from the old Wurrzag model from GW.  The original model came with a wooden mask that had a very islander vibe to it.  The model is essentially still available from GW but it has a name change now and a new head.  Admittedly though if you cut those horns off the helmet I think you’d have a sweet looking football helmet.

Anyhow, I helped myself to a football from a 3rd edition plastic Orc thrower and a plastic 40K Ork Boyz head and went to work. 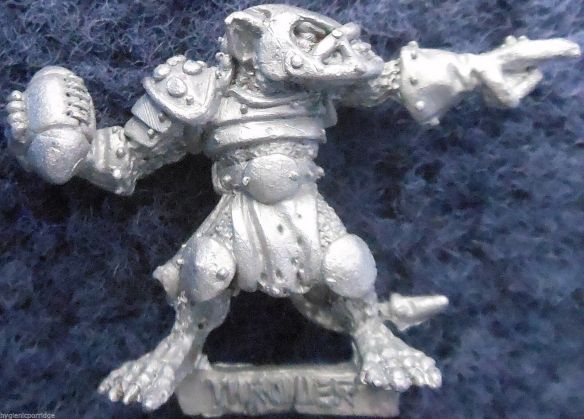 The gold standard of thrower poses

I was looking to make the iconic pointing downfield about to chunk the long bomb look and there wasn’t much work to get me there.  I used a bit of greenstuff to change the position of the head slightly and then used more to create a bracelet to hide the seem line on the hand transplant and to give the helmet a face gaurd.  Overall I was pleased with the models outcome. 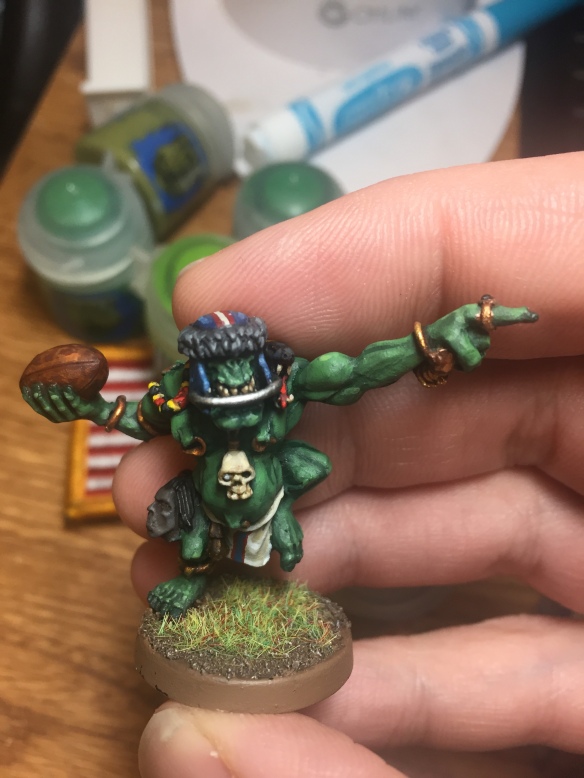 It was my first time painting a green orc and I think the skin tone was fair, but after a decade of sitting in storage it was nice to finally get the model in play.  Despite a mostly quiet afternoon Ol’ Harry helped my team earn a 3rd place finish by using drop off to get the ball to an open Blitzra in the final game.  The chances of seeing him in action again are slim, but it was a fun build and something I’m glad I finished.

If you are ever in the Oklahoma area and looking for a great time at a tournament, check out the two gingers at Both Down.  Some of the most fun tournaments I’ve ever attended.