To coincide with the recent Wood Elf team release for Blood Bowl, and the excitement our own colleague Casey has for the team, here at WS&TZ we’re offering our take on this team for GW’s overlooked gem, Blitz Bowl.

When approaching a new Blood Bowl team to convert to Blitz Bowl, we adhere to a few basic principals:

A Blitz Bowl player only has three skills. Combined with the above guidelines, it can be a challenge to realize a Blood Bowl player into Blitz Bowl. What we attempt to do every time is to use what’s already been officially done where it makes sense, but any new skills added should go towards helping the overall team have the ‘feel’ or ‘essence’ of their Blood Bowl major league roster.

So, with that, three of the four players are pretty easy to materialize. The Lineman above and these two: 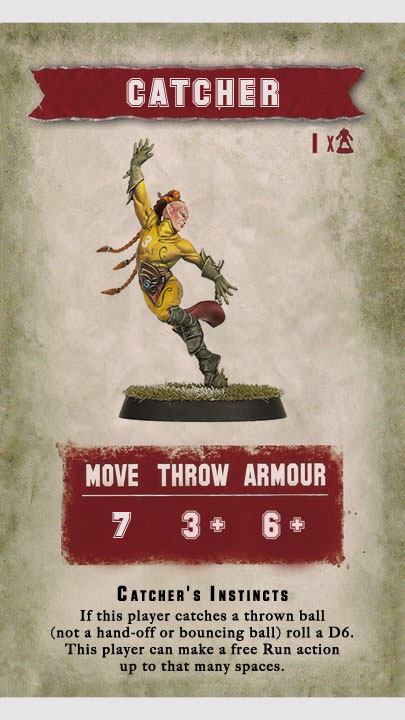 The Lineman, Thrower, and Catcher are similar to the two official elf offerings, but they have some speed on the Catcher, but a bit weaker armour overall. 6+ on the catcher as their Blood Bowl counterparts are ST 2, but alas ST is not a stat in this game.

The challenge for this team came with one of Blood Bowls marque positionals…the Wardancer. In Blood Bowl proper this player has the mighty Block, Dodge combo. Filling a fast Blitzer-type role, it would be easy to give the player Offensive Specialist. But would the team play that much differently than the Elf Union or Dark Elves? Instead, we’ve opted to up this players speed by one over the other two Blitzers and highlight the Leap ability. 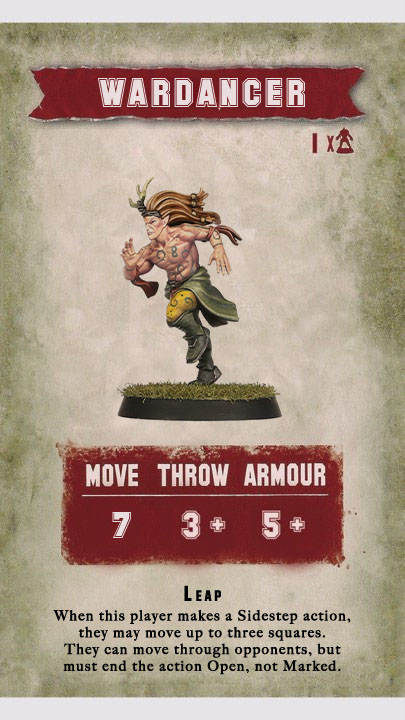 The Wardancer is going to shine when they are marked by, or go mark, a player during their turn. They’ll get their 7 movement during their RUN action, plus the 3 for leaping with a SIDESTEP action. It may seem odd to purposely engage defenders, but it perfectly fits with the theme of Blitz Bowl as this flashy player seeks out the opposition to spin around, breaking some ankles, and impressing the scouts.

As with any game, change what you feel best fits your idea of the game. We feel like this roster gives the Wood Elf team a little bit of its own flavor. They’re a little faster, but lack the offensive punch of the other two elf teams. It can be difficult to separate 3 (and at some point 4) very similar type teams with a handful of stats and one skill, but give this roster a spin and let us know what you think.

Oh, he’s the backside for those printing the cards. Enjoy!

(thanks to @caseyrog for making the cards!)