I know it has been a while since I have actually shown a painted mini, and there is a good reason for that… I FRIKKIN HATE PAINTING MINIS. But seriously, this weekend some friends and I are taking a road trip up to Oklahoma for the annual Orclahoma Bowl/Spiky Cup tournament weekend held by the ginger badgers of the Both Down Podcast. This will be my third time to participate in Orclahoma/Spiky, and I always have a good time. The reason that this is relevant to painted minis is that one of my good friends is taking a Human team and needed some extra muscle for the tournament. He decided to take Zug, but he did not have a painted Zug mini to field, so i offered to pick up the damn brushes and help him out. So this post is here to show you that I know how to do more than open boxes! When the occasion arises, I actually can manage to paint something.

I present to you, a PAINTED Zug! 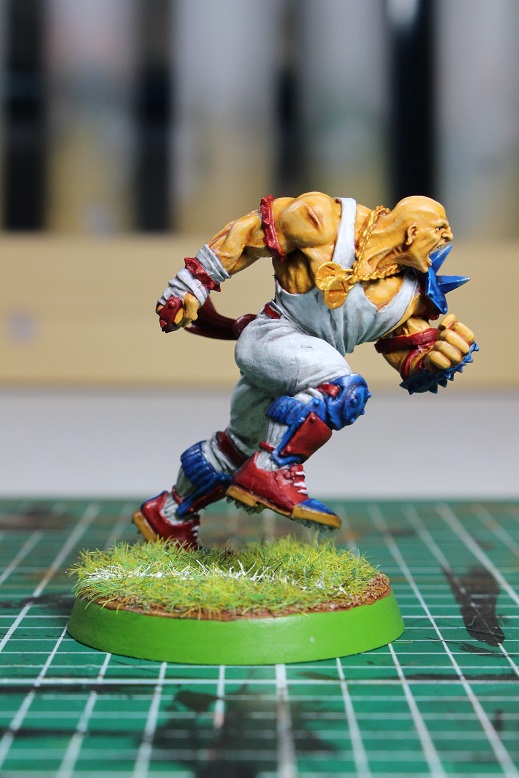 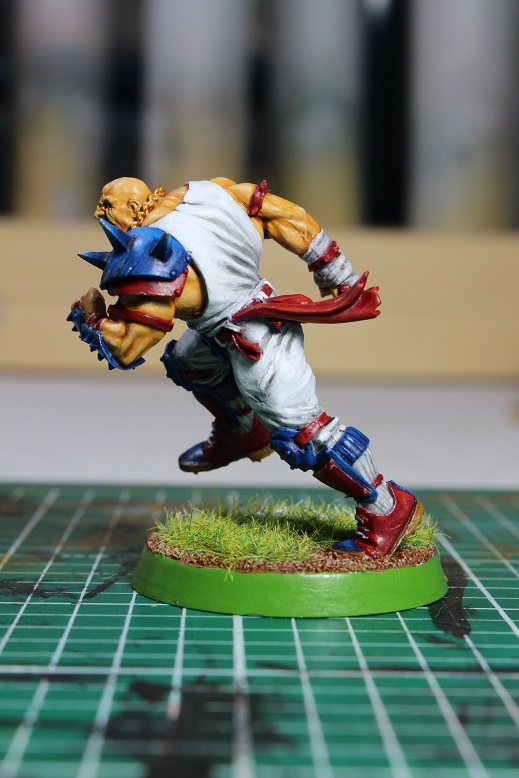 The idea behind the color scheme is that my human team will be the New Empire Patriarchs (going for the obvious pun on New England Patriots) and so I went with a red, white, and blue theme. Most of the color on the other minis will be on the armor with the cloth parts being white, but since Zug is not actually wearing a whole lot of armor, his kit ended up being mostly white… which is a very hard color for me. Oh well. Future minis will have more color to them.

Now, obviously I am nowhere near a “pro” level painter, and I do not claim to be, but I made a realization while painting this mini. For the last several years I have been steadily working on improving my painting level, and for the most part I have gotten much better. However, for every action, there is an equal and opposite reaction… The higher levels I attempted to achieve while painting these minis, the longer it has taken to paint. The longer it takes to paint, the more I hate painting. The more I hate painting, the more I completely dread even looking at my brushes. As a result, I have not really painted anything at all in MONTHS.

With all of this in mind, I have decided to dial back my painting levels from now on. While I know that I CAN do better, if attempting to do better keeps me from even trying, what is the point? With as many minis as I have piling up, I would rather have more minis painted to an OK level than a small handful of minis painted to a much higher standard.

In other news, Games Workshop has announced a new boxed game that is reported coming “very soon” called Shadow War: Armageddon. The reason this is cool is because by all reports, its rule set is basically Necromunda, but opened up to a dozen standard Warhammer 40K factions. It also comes with some pretty awesome looking plastic molded, NOT CARDBOARD terrain. Necromunda is my favorite GW game that I have never played. I am on the fence about picking the game up because there is no guarantee that we will actually play it, and with the terrain, I expect it to be the polar opposite of cheap, but it definitely looks cool.

I also wanted to give people a little heads up on some “coming soon” items to look out for on the blog. First up is that I ordered the new Forge World Rat Ogre and Griff Oberwald resin minis. Those should arrive next week, so I will be doing unboxing posts for those as soon as I get my hands on them. Not related to GW but still Blood Bowl, months ago I backed crowd funding campaigns for both the Iron Golems Pro Box set and the JBone Industries Slann Team, sculpted by none other than Pedro Ramos. Both of those campaigns have finally shipped their products, so I will write unboxing posts for both of those as well.

Last up, I have a favor to ask readers… I am currently looking to get my hands on a Grak and Crumbleberry set of Warhammer World exclusive minis. I would prefer not to pay eBay prices for them, so if anyone close to Nottingham reads this and can find it in their hearts to help a fellow BB addict out, I will gladly compensate you for your time. I even have a few Referee Packs I can trade if anyone needs those minis. If you can help me out, let me know in the comments below.

12 thoughts on “All Dressed Up And Nowhere To Zug!”