Warhammer Quest Silver Tower is the game that launched my current Age of Sigmar obsession, and at some point I’ll jot down all the reasons Age of Sigmar is deserving of your hobby time. For now, I’m sharing another home-made hero.

The Blood Bowl Star Player is the character that initially had me looking outside the Age of Sigmar model range. I dig the Silver Tower’s setting and the idea that champions from across time and space can be summoned to challenge the Gaunt Summoner’s Tower. As a fan of Blood Bowl the new edition (Blood Bowl 2016) arrived in time to give us the opportunity to get a model that is close in scale to the new Age of Sigmar line. In my mind, the orc is the quintessential representative of Blood Bowl, so one of those ‘ard boyz is what I went with. When creating the character, I poured through the official GW WHQ heroes to find one that has Nuffle approved stats. Far easier to re-skin a character than create one from scratch. Plus, with limited gaming time, I don’t have to spend as much time play-testing and can get directly stuck into a game. 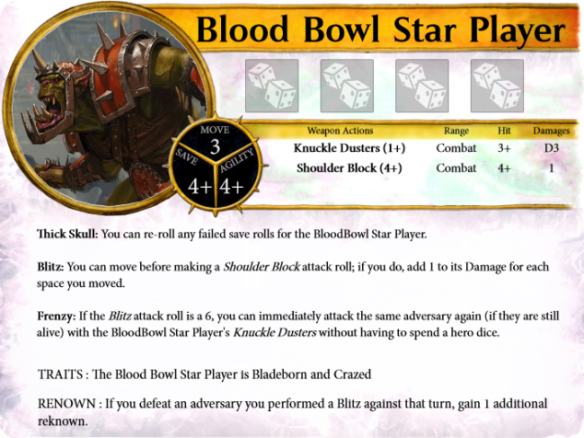 Clearly, any orc model will do, so just nick one from your current BB team. I had some old Gorkamorka transfers knocking around and the red lighting looks to provide the flair of a star player. In fact, it reminds me of another football player out of place on a foreign world…Just think of mine as “Flash” Gore’dem if you will… 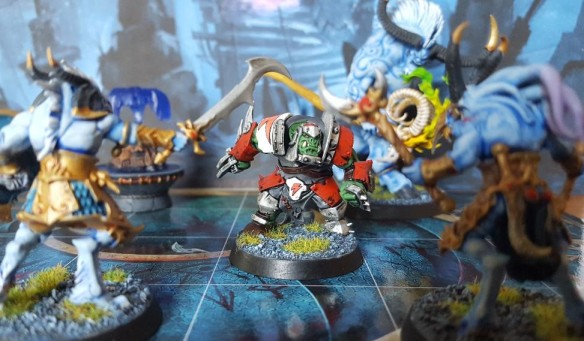 If you’re also a Blood Bowl fan and prefer to go with a human hero, I tricked up the same card with a human image. Enjoy.