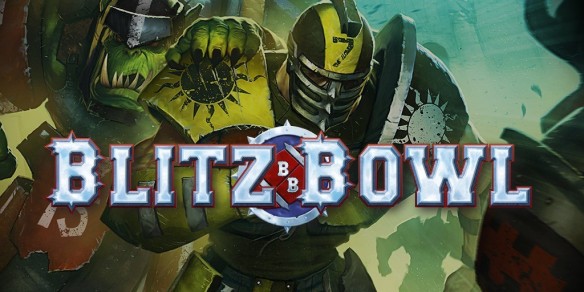 Anyone I know fortunate enough to have a go at GW’s Blood Bowl Universe intro game, Blitz Bowl, has had a grand time. Released only in select markets its availability is limited which is a shame as this is a fantastic refinement of the Blood Bowl concepts by designer James Hewitt. This isn’t a review of the game or its mechanics, there are plenty of those to be found online, but how this limited release title enabled this hobbyist to finally be able to build a little Blood Bowl themed terrain.

One of my favorite parts of the miniatures hobby is the little worlds we get to visually create. I tend to add unnecessary bells and whistles to games to help the players get a feel for a setting, or at least our little corner of one. I’ve enjoyed working on terrain for Warhammer Underworlds and fancy Space Hulk bases…both totally unnecessary for play.

For Blood Bowl, I’ve always wanted to create the sort of pageantry one would find at, say, a jousting tournament. However, until now, there hasn’t been a place for it. Of course stands, banners, and such could be done around the pitch, but then that stuff becomes a hassle making it difficult for the players to reach and move the models around the board.

Blitz has blocked spaces on the board. The game requires restricted spaces. Printed on each board (the game has a dual sided one) are images of statues of some of the Star Players. This is a cool opportunity to do the sort of tribute to players you see around the world for an organization’s top athletes. Another bonus….painting a bronze or brass statue is a hell of a lot easier than a banner.

Fortunately for me, I inherited some Forge World Star Player minis from a friend reducing his collection. I didn’t have enough star player models for all the terrain needed for both sides of the board, but I also recently received a set of the Arcane Ruins from a buddy who had a spare. Thinking over what I could do here, I decided to cut down some of the Arcane Ruin pillars to create a plinth, glue on top a square base, and pin a FW model to that base. I also reached out to a James, of WS&TZ fame, for some spare shields. I’m not nearly good enough to free hand any text or what not on minis, but I thought I’d have a go at painting up ‘coat of arms’ as it were for the main team of each statue.

I decided to honor the old 2nd edition BB team colors and used that as a basis for their crests. Again, I’m no good at fine detail work, so depended on BB16 transfers. They’re a bit smaller than I’d have liked for this project, but the result is good enough. 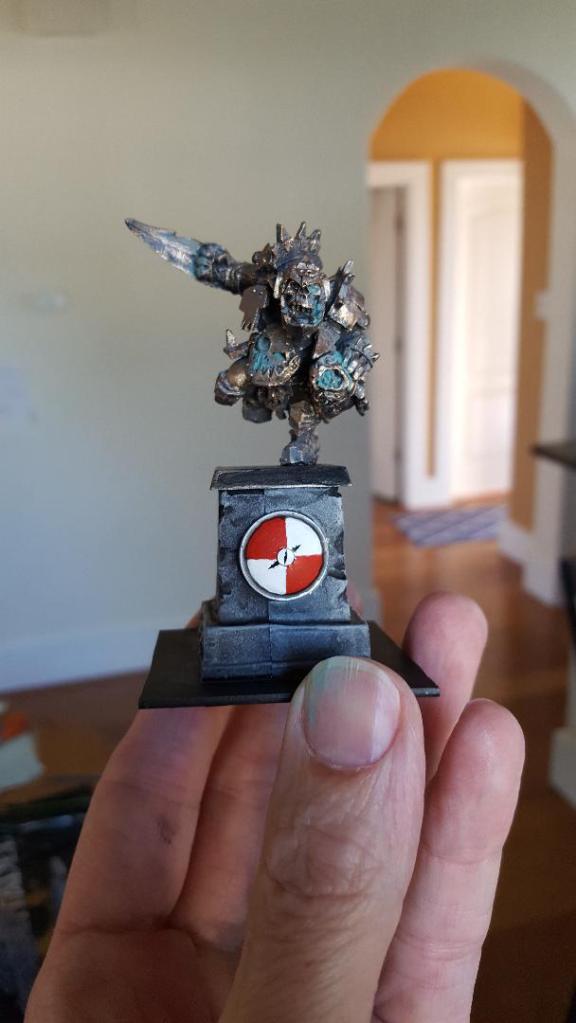 The ‘Hall of Heroes’ board has four statues honoring some of the biggest names in Blood Bowl history. Having the models raised up on plinths give them a little more size and weight over the standard BB player model even though they’re the same scale. Below is my BB/WHQ model for “Flash” Gore’dem demonstrating the scale. I opted to have the troll’s base a little shorter so he isn’t so tall to become a nuisance during play. 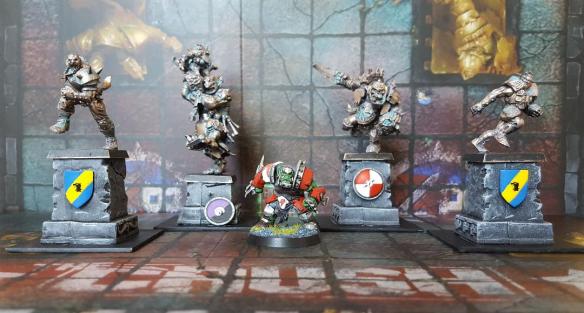 The ‘Temple of Nuffle’ board has two larger blocked spaces. I only had the four Star Player models above, but still had extra Arcane Ruin bits. The idea here is that we have the BB logo’s celebrated on high with the shields from the other teams that come in the Blitz Bowl box (the game comes with cards for about 7-8 teams). I tried to do the shields a little in the way the 2nd edition teams are painted. So the Darkside Cowboys have yellow on top, the Elfhiem Eagles have yellow and pink checks, etc. As new BB teams are released, and added to my Blitz Bowl collection, I’ll add their shields to the pillars and archway for this board. 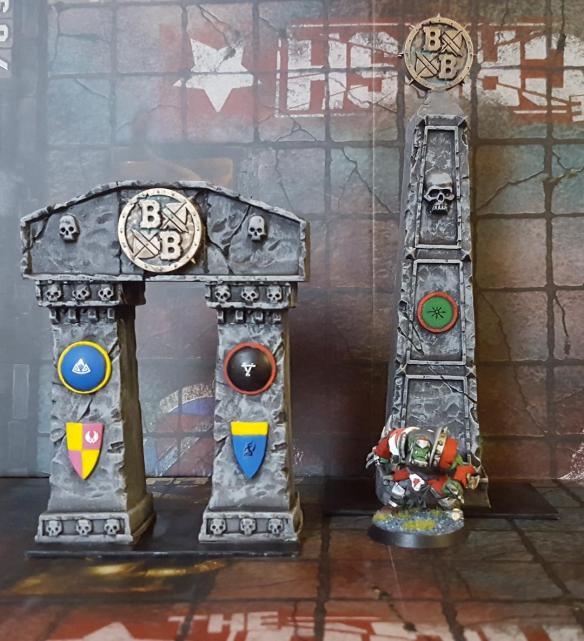 I guess the way the squares are blocked out on the board, the Temple terrain would look more like this in play. 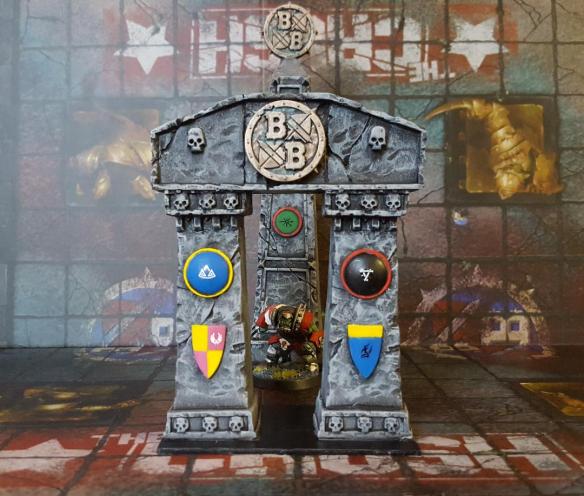 In the end, I think the four statues are a little closer to what I had in mind, but both boards now have a bit of BB lore enhancing their games. One of the things I enjoy about Blitz Bowl is that with only 6-8 member squads I have time to paint up one from each team. I plan on revisiting all my old Blood Bowl and Dreadball teams (all long sold off) as Blitz Bowl teams. This game is a great opportunity for me to celebrate the past of  Blood Bowl both through official lore as well as my own legacy squads.