Dark Future was one of the two Games Workshop titles that captured my imagination back in the late 80’s. My friend picked up a set while I bought Blood Bowl Second Edition from a small game shop in Kaiserslautern, (at the time ‘West’) Germany. If I remember correctly, the shop was called “Gerd’s” and we’d talk one of our parents to drive us there every couple months as both our father’s were stationed at a nearby US army base. Well before the internet, it was the only place we could find hobby games of this sort and the outfit from Great Britain quickly replaced TSR as our go-to company for gaming. I often wonder what become of that shop and it’s owner, but for now this tale is about how that middle school kid, now in his mid 40’s, found himself back out on the wasteland.

I’ve probably bought and sold Dark Future more than any other gaming title. Often hoping to feel the adrenaline of white line fever that I felt 30 years ago. My last serious foray was about 15-20 years ago when I procured a new set at a very decent price. I was able to play several times at home and brought it to a few conventions. It always seemed a hit, but the complexity of the rules began to fall more and more out of date with the rise of German styled boardgames.

A few of my cars from this era still haunt the Future Highways website. A site that was at one time the only online source for Dark Future on the world wide web.

Fort Worthless Bastards pulling out from their hideout.

The Outlander, renegade of legend in Texas.

I had another spike of interest in Dark Future three years ago when I collected and read the entire Jack Yeovil novel collection. I also picked up another set of the game then (having sold off the others), but this collection didn’t last either. Blood Bowl endured, but other, more convenient-to-play games keep pushing Dark Future away.

Gaslands was a title I heard rumblings of a year or two ago. The setting certainly was up my ally, and I had a copy of Ospry’s Fistful of Kung Fu which looked interesting. Still, I didn’t push the gas on it. I felt it would be a betrayal of Dark Future and all the fun times she gave me.

But I must be pretty easy…It didn’t take much to get back behind the wheel.

All it took was a shiny new hardback edition and this blog post from Sho3box. To be honest, I loved playing Dark Future, but didn’t care much for painting the cars. I think it was all the flat surfaces that didn’t work for me. I sputtered thinking about painting cars again. Sho3box’s post turned the engine back on. If I could knock these out as quick as it appeared, then I could take a chance on trying the game out. Not only did his ingredient work, but I made it even faster by going light on the conversion.

A few simple guns from the essential Implements of Carnage and my fleet was ready for a makeover. What follows are a few main steps from Sho3box’s guidelines.

A wash of Nuln Oil over the factory paint job and to be honest….one could have probably just stopped here and have a fine set of cars for tabletop play.

I did proceed though and followed it up with a wash of Argax Earthshade. Those bright Hot Wheel colors are pretty muted at this point, but you can still see the life they had in the “world that was” fading underneath the grime. 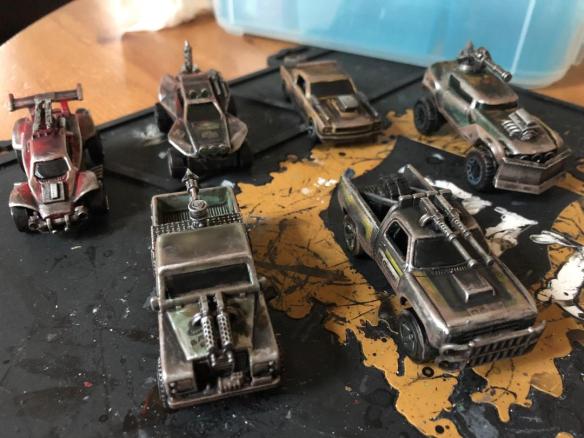 Some dark, then light brown dry-brushing on the bottom third of the vehicle followed with some steel dry brushed on the guns and along the edges and these cars were just about ready to test their mettle on the Gaslands.

I did opt to simply paint the windshields black, and eventually go with some neon headlights. The speed of this process was fantastic though. More time was probably spent waiting for the wash coats to dry than painting. Yes, I could have taken the cars apart, added mesh and plating on the windows and all of that, but I have yet to play a game of Gaslands. If I find it sees a lot of plays…then maybe I’ll go the more creative route. In the meantime, this first fleet was done in an evening and I’m ready to host a game in the near future. Also… I need to say it…this process provided better results than my attempts at ‘real’ painting did a few decades back. These cars look far cooler than the old Future Highway ones. 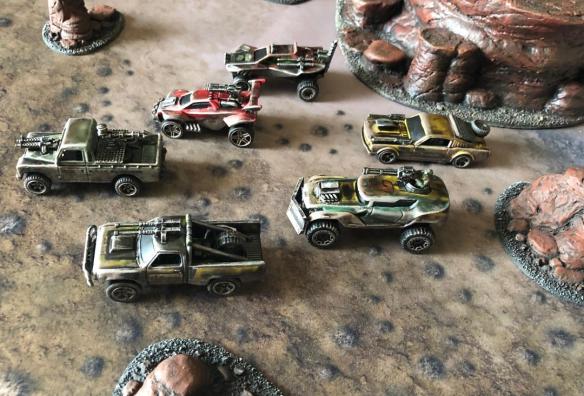 EDIT: Not worth a new post, but I wasn’t too happy with the yellow car so replaced it with two others and I knocked out using the same approach. This technique is fantastic.

7 thoughts on “Gaslands: Back into the Wasteland”