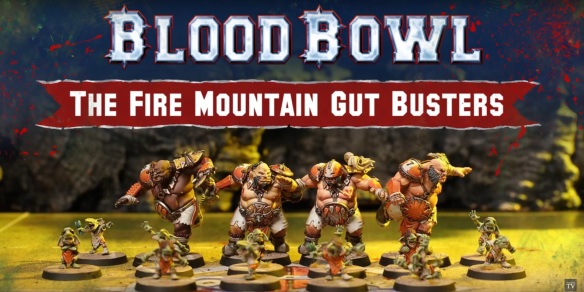 Many years ago when I was a much younger man with no responsibilities, I had the luck to attend the first Blood Bowl tournament held at the GW headquarters in Nottiginham.  Besides playing six nail-biting games over a two day period and attempting to drink Bugman’s Bar dry, I had an exciting opportunity to be one of the first 100+ people to get my hands on the then brand new metal Ogre team.

At the time the Ogre team was something to be awed at.  It offered a plethora of arms, legs, head, and bodies to help create a wide variety of poses.  It also came with a new goblin model and an arm representing an ogre throwing a goblin.  The models wear beefy!  Being completely metal they were always at risk of drops breaking them back into their component pieces.  Their size and bases also made them tricky to use on the game board.  It wasn’t too long before the team was out of production and now 18+ years later a new and improved team takes to the field.  Do they stack up to their forefathers?  Are we seeing an ogre renaissance?  Mr. White and I offer our thoughts on this new team and how we feel they stack up against their history.

There were rumblings that Ogres would follow the Lizardmen to the Blood Bowl pitch, so the recent announcement wasn’t a total surprise. I do like the look of this team a lot. They aren’t a team I originally saw myself fielding, but I do think this may be one of the better designed teams of the new Blood Bowl edition. I know the BB universe isn’t supposed to be in The Old World proper, but in a world that’s a parody of The Old World. Still, with this team they’ve kept the ties between the two worlds strong.

You’ve got the pseudo-Mongolian look of the ogres which match the look of their Warhammer counterpart. From the fu-manchus to the gut plates and those curled shoes. They’ve also gone with ‘gnoblars’ instead of ‘snotlings’… and their ill fitting shirts are a great touch.

Even cooler than those historic ties are some of the other small touches. The helmet face option looks _very_ similar to the old 4th (or was it 5th) edition Citadel metal ogre helmets. Initially, I groaned at more running models as I prefer both feet on the base, but it dawned on me there’s a hard to get Ogre Star Player that’s a Kicker and he boots some Halfling. You may not be able to travel to Warhammer World in Nottingham to get the pair, but with this team all you need is a halfling from their recent release and you can create the Star Player combo as the running legs can certainly be used for kicking legs.

The only issue I have is that they probably could have done three ogres per sprue and made this a complete team-in-a-box like the Chaos Chosen. Being a _very_ difficult team to coach, I would think a one box purchase would increase sales. Needing multiple boxes for a team of this tier may give people pause. All in all a fantastic release, that sort of has me considering them as an option for a lower tiered team in the collection. Originally it was between Nurgle and Vampires, but this squad has me seriously reconsidering.

The dice look fantastic. Next to the Shambling Undead, these dice are good candidates for generic dice. I like the white.

The pitch puts a bow on the tie to the Old World. The Great Maw is front and center of the pitch, and little maws prominently rest where the traditional trap door spaces lay. Again, this team seems to tie the world of Blood Bowl to the Old World that was more than any other team.

As I’ve begun to talk myself into this team, I’m gnashing teeth in regards to the rules release. Since Spike! mags have become compiled in the Almanacs, I’ve passed on them in favor of the hardbound compilations. Unfortunately, even being a 2019 release, the Ogres don’t appear to feature in the 2019 Almanac. I’ll have to wait until the end of 2020 to get their team specific rules and fluff (and the Slave Giants!?). That’s a bummer. I suppose the $12-15 for the Spike! magazine isn’t too much of an outlay of cash to get their rules now, but I’ll be double purchasing this data at the end of 2020. Oh well…

On one hand, it’s fantastic to see a booster released this close to the team box. On the other…it’ll probably cost more than simply buying a second team box, or even better splitting a box with an Ogre coach. But nevermind the economics, what about the models? Eh. That’s all I’ve got. I _love_ the plastic team. Even though they’ve moved BB Ogres here from the lean crushers they traditionally were, they’ve gone with the Gutbusters in a classy way giving the team a distinct look. I’m even ok with female models and am glad to see more in BB. These ladies though….they don’t seem to follow the same design aesthetic as the plastic team. The squatter looks more like a norse or amazon Ogre and the other a hillbilly. Neither have the far east look as the males do. What happened?

And the Gnoblar…I thought they were junkers and scrappers? Why’s he holding a dismembered leg like a ghoul? Maybe he’s tossing it to an Ogre to eat, but for some reason this Gnoblar doesn’t do anything for me at all.

All-in-all, I’m still very interested in this team. Fun to assemble and easy looking to paint are two attributes I look for in a team and they’re covered well here. Good job, Games Workshop.

I must say that I am very surprised to see the Ogre team back.  Not that I didn’t think it wouldn’t happen, but like I said in the intro, after 18+ years it seems like a surprise.  So what exactly does the team offer?  For one box set you are looking at four Ogres and enough gnoblars to make a full 16 player roster.  This is an exceptional bundle as four ogres is about what you want to start with on an Ogre team so this one box is a great value.  Compared to the cost of the original metal team I think GW scored with the design of the team setup.  Speaking of the design…

This team certainly has an anchor firmly in the world that was.  Gone are the lean and muscular Ogres of old and in their place we have gut plates and some well-rounded figures.  As for the Ogres, I’m not sure with how I like the design.  While there is certainly nothing wrong with the appearance, I have a different idea of the style of Ogres.  I guess I’m still a fan of the classic look of them being lean and muscular. 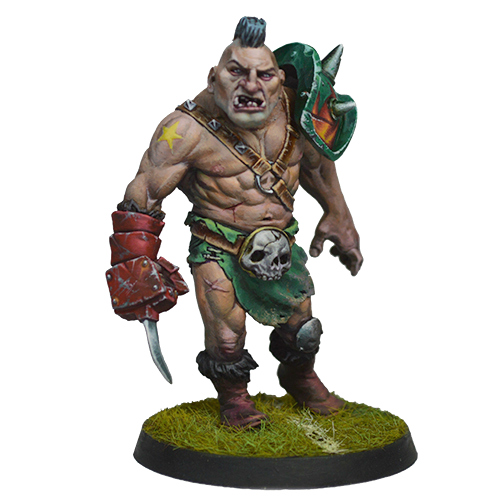 Again, I’m not saying that this teams design is bad, its just not what I would prefer.  The team does have the added plus of plastic though which puts it’s cost and ease of use as a clear advantage.  I currently own the Vortice Ogre team, which while a great unique team, has the burden of being resin.  The snotlings on the team are extremely delicate, something that I don’t think this team has too much to worry about. 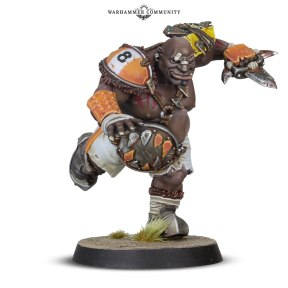 GW always does a great job of hiding duplicate sculpts in their presentation, but its not hard to see that box is only offering two ogre body types.  While it looks like heads and arms can be customized, having only the two figures to pick from is a bit of a bummer.  The added bonus is that it appears a booster pack is on the horizon.

Now, I’m an outdated dinosaur these days as I generally don’t look to gender integrate my teams.  I’m not against the idea, I just prefer to have them all and the same.  Bottom line, while the booster offers some rather unforgettable models, they aren’t exactly what I would be looking for.  The additional gnoblar I don’t mind, but with a team that will see their runts leaving in droves, I doubt the need for more unique looking gnoblars is really needed.

I’ve been collecting all the new Blood Bowl pitches as they have been coming out so this new field will be an auto-buy.  I’ve tried to speculate what the custom rule might be, but I can’t think of anything off the top of my head.  The dice on the other hand I find rather plain.  My chief complaint on the Blood Bowl dice is that the font used has been identical on all the sets.  Essentially they are just different colors with a team logo thrown in.  While I have acquired a few sets this set doesn’t pull me in at all.

I think this team will be a success.  I’m pleased to see that new teams are continuing to march out and glad that Ogres now have a new way to be represented on the field.  It does tempt me to abandon the resin for the ease and durability of plastic.  My Vortice team has long been waiting to see the light of day and remains unwashed, unassembled, and tucked deep in a storage case.  The thought of dropping a modest sum to get an easy fix is tempting.  In the end I’ll hold off I think.  Chief reason because of the back log of 20 or so teams I’m already waiting to put to use!

So how do you feel about the Ogres?  Let us know what you think.