Gaslands is a game that has the advantage of letting hobbyists get off sorta cheap. Small, toy cars usually cost about $1 USD, and I can image they’re just as affordable around the world. It seemed odd to me that all of the doodads surrounding the game were then going for quite a bit. So, I was determined to lean into the old school hobby ethic and do it myself. Starting with the gates necessary for the default Gaslands scenario, the Death Race.

There’s a hardware store near the house and I started my quest there with the assumption that I’d find what I’d need. After all, per the scenario, the ‘gates’ need only be two markers one ‘long’ distance apart from each other. No need for anything with fancy overhangs stating the gate number, while potentially getting in the way of play. I wanted something cheap, small, easy to store, resilient, yet thematic.

These are little plastic caps a handyman puts on the end of two bare wires, twisting them together so the wires stay held allowing the electricity to flow. They come in several different sizes too which is perfect…I wouldn’t need to number these gates, just have cars drive through them in order from shortest to tallest. However, with only 3-5 pairs of gates on the table…would players really forget which order to pass through?

Anyway, I glued them to washers, primed, then used the exact same painting technique i used in my cars as documented in an earlier post.

You can see how these gates compare to a Hot Wheel car. 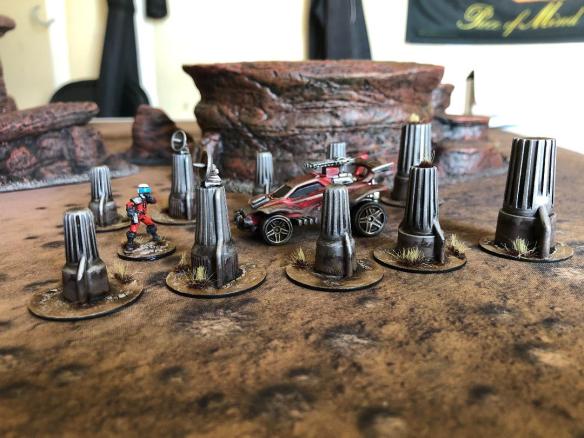 Oh, the little radar thing on the top of one pair? The green wing twists at that size had a hole at the top I wanted to cover. I used little radars from the Implements of Carnage sprue. Thematically…I use them as the first gate pointing towards the cars. They send out some sort of nullifying signal preventing a car’s weapons from working until they pass by that gate. Works for me…

Here’s what four pairs of these gates look like on my table.

Down near the driver’s level.

Maybe these wire twists are protective covers over some sturdy electronic/magnetic device that omits waves sensing when a car passes through. For about $5 USD for a bag of 25, I’m good with this explanation. My table is a bit more “Out in the Wastelands” than others I’ve seen, so these low, hardy gates placed out in the barren grounds will be fine for me.

Another action shot, including a victory pose with our Driver model (from Citadel’s Dark Future Street Warriors line…_not_ cheap).

Oh, I found another cheap score during the same trip. Crimp Sleeves look sorta like spent bullet casings…ammo counters. Hex nuts….hazard tokens. I think between thes,e the wing twists, and washers I was out about $12-15. Not bad.