OK, so it has been what… eight months since my last post? Well, I never claimed to be particularly good at this blogging thing.  I can mostly attribute my lack of activity on this site to two things: 1) A general lack of activity in my gaming group. 2) A bit of hobby burnout. Anyway, I am going to see if I can pick things back up a bit, and start posting a little more regularly again.

The lack of group activity is due to real life. One guy moved away, one guy has five kids and is too busy with other things, one guy has had some significant family health issues, one guy is still active military and just got deployed to the Middle East. The burnout basically stems from a marathon painting session at the beginning of the year in an attempt to get three Blood Bowl teams ready for Orclahoma Bowl in March. It looked a little something like this…

The team on the left is the Dwarf team sculpted by Pedro Ramos, and sold by Iron Golems Miniatures. This is a VERY cool Second Edition Blood Bowl inspired Dwarf team sculpted in 28mm scale. Hands down the coolest Dwarf team out for Blood Bowl right now. This was my team for Spiky Cup, which is day two of the Orclahoma Bowl/Spiky Cup weekend. I got in on the crowdfunding campaign and was very happy with how things turned out. Since I already had a Third Edition Blood Bowl team painted in Pittsburg Steelers colors, I decided to try something a little different with this team, and I went with a San Francisco 49ers color scheme and decided to call the the Clan Forged-Arrow Shorty Miners. I am not the most clever person around when it comes to team names, or with color schemes, so these days I tend to stick to punning off of pro sports teams.

The team on the right is the Ogre team, again sculpted by Pedro Ramos, but this one is sold by Vortice Miniatures (their website kind of sucks, but if you find something you like, just email them and they will email you back with a price). It is another fantastic team with a lot of character. This was my team for Orclahoma Bowl, which is day one of the Orclahoma Bowl/Spiky Cup weekend. For this team, I decided to go with Temper Bay Bonecrushers in a pun on Tampa Bay Buccaneers. They were painted gray and red after the Tampa Bay colors. I experimented with layering for the first time on this team, and the grays did not quite come out how I intended, but I am happy with them overall.

The team in the back was actually my first (and maybe last) team painted on commission. It was painted for Steve Campbell of the Both Down podcast. It is a Games Workshop Fifth Edition Vampire team. It has six vampires, twelve thralls, a cheerleader, and a coach for twenty minis in all.

All three teams together come to a grand total of forty-seven minis painted in about two and a half months. That may not be a lot of minis for some guys, but for me, it was and insane amount for the period of time that I painted them in. That is probably a full year’s worth of my normal mini painting output crammed into about ten or eleven weeks. As a result, i have barely picked up a brush since.

It is not all bad news, though!

No, this post is not all about burn out and gaming groups going into hiatus. There were a few gaming highlights over the last eight months. First, let’s talk about the hardware!

As previously mentioned, at Spiky Cup, I decided to try something a little crazy and went with Ogres. This was not only my first time playing Ogres, but it was my first time playing any stunty team. It was an interesting experience, and I ended the day with a 1-1-1 record, which I was pretty proud of for my first try at a stunty team. My efforts paid off as I went home with the Stunty Cup trophy for Spiky Cup.

Next came ROT Cup in Austin, which is held in April. Despite a rough start to my day that involved a powdered donut before I noticed that the package had mold farms in between each donut, I had a decent day overall. I brought Chaos Dwarves, which was another first for me, and despite receiving a schoolyard beat down in my first game against another Chaos Dwarf team, I was able to bounce back and won all of my next three games. I came in fourth, only missing third by seven points overall. Not only that, but without actually realizing it, after my first game, I did not give up a single touchdown for the rest of the day and as a result, I ended up taking home the Come And Take It (Best Defense) award.

With the addition of these last two trophies, my little trophy shelf is starting to look a little respectable.

OK, that is the end of the review of my last eight months…

What is in store for the future?

Well, Diablo Bowl is coming up in July. For Diablo Bowl, I will be taking my Shorty Miners that I painted for Spiky Cup, but I have a lot more painting to do. Since I had some many minis to paint for Orclahoma/Spiky, I only painted the bare minimum of players that I needed for the tourney, which is thirteen. I still have a quite a few minis of that team to finish painting and I have even added more minis to the team as well. I picked up some coaching staff minis from Star Player Miniatures as well as another Deathroller from Vortice Miniatures. In total, I now have over thirty minis for this team. I have started painting the next round of minis already, but I have been stalled for a little while. I am out of time though, and I now have to get back to work.

Also on the agenda is DeadZone. Last year, after wanting to get into Necromunda for a very long time, and even hanging onto a boxed Delaque gang for probably fifteen years, I saw that Mantic was running a crowd funding campaign for DeadZone. DeadZone is similar to Necromunda in a few areas, so it piqued my interest. In the end, I could not resist and I pretty much bought everything in the campaign. I was initially drawn in by the plastic terrain that comes in the set. I saw it and new that it would be great for Necromunda. Then I started watching game play videos of DeadZone and I started to like it as well. What I saw in it was a good game, plus awesome terrain that is nearly perfect to be played with another good game. Well, about a month or so ago, I got a large box in the mail. I opened the box and frankly, I was completely floored by the amount of stuff in the box. 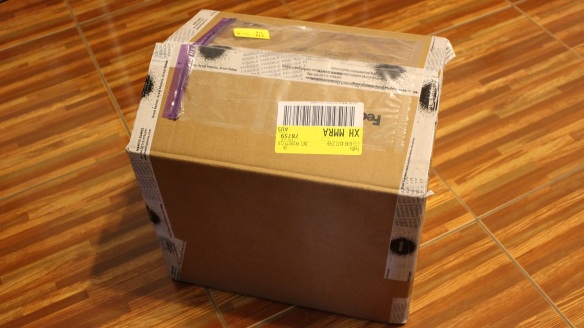 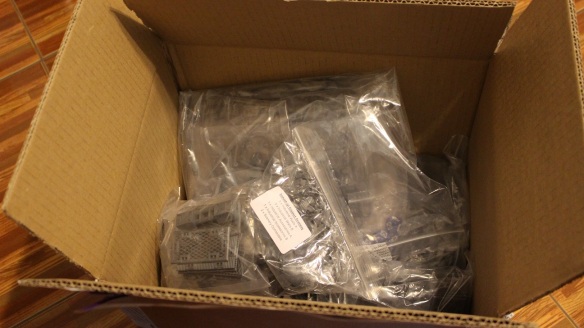 It may not look like much from these pictures, but it is so much stuff that it is actually a little overwhelming. More than a little really. It is well over one hundred minis, and I ended up sending out some emails and telling my friends that they could have some minis if they painted them. My only condition was that they could only sell them to me if they decided that they did not want the minis anymore. We are already planning a three to four day weekend of gaming next summer, and DeadZone will be a featured game of the weekend, so all of this terrain will be an ongoing project for the next year. I plan to post updates as I go so anyone who wants can follow along with things.

DeadZone is, by far, the biggest project on my plate right now, but I have several other smaller projects. I still have MANY Blood Bowl teams that need to be painted. I think I am now up to twenty teams in hand, with four on the way from crowdfunding campaigns, so I hope to paint at least one more team by the end of the year. I have a nice Ostlander Mordheim warband that was given to me by a friend that I hope to get painted up soon. Thanks to my son, I also have started to get into Legos with him… This is something that I can already tell might turn into an addiction, so there might be a post or two about Legos in the future. And last but not least, I managed to secure two copies of a very rare miniature….

This is the “unreleased” Zug the Mighty, sculpted by Mark Bedford. Big thanks to Tom Anders at Impact! Miniatures for getting these minis to me! One is for me, one is for my friend who is fighting the good fight in the Middle East. I hope to get mine painted up this year, if I can squeeze it in.

Well, that’s it for now. I know that this was a long post, but hopefully future posts will be shorter and much more frequent. Time will tell…