So, yesterday I attended a new local Blood Bowl tournament called Bugman’s Bowl. As always, it was good to see friends and play some good games. The tournament itself was very well run and Dean did a great job for a first time tournament organizer. He has some interesting concepts such as using playing cards to randomly assign table numbers for the first game, as well as for door prize drawings at the end of the day. They added a little more flavor than using little pink or blue raffle style tickets. The most entertaining element all day was the “Get Me a Beer” hat. If any players got pushed into the crowd, the player doing the pushing would yell, “Get me a beer!” and the player who got pushed would then have to wear a large, and very silly hat until someone else yelled, “Get me a beer!” Anyone who finished the game while wearing the hat, then had to go up to the bar and exchange the hat for a free beer to give to his opponent. Very clever and thematically appropriate. Finally, while we did not get any custom tournament dice (which was a little bit of a bummer), we each got an Impact! miniature in our welcome bag. At the end of each game, if you lost your game, you could force your opponent to trade minis with you, and if you tied, you both had to agree on the trade. Like ROT Cup earlier in the year, Bugman’s Bowl was held at 4th Tap Brewery here in Austin, TX. Also like ROT Cup, I brought Chaos Dwarves as they served me pretty well the last time that I brought them.

My first game was against Both Down’s Steve Campbell, and his Undead team. Steve is a very nice guy, and he is a good coach. I do not remember a whole lot about this game beyond it being VERY tense and tight for 90% of the game. I kicked in the first half and managed to hold him off from scoring. I received in the second half and slowly began working my way forward. Late in the second half, he managed to knock the ball loose and instead of holding for a tie, he decided to try for the win by going for a pass. It was a good thing for me that he did. What almost never happens actually happened for me… A Bull Centaur in a couple of tackle zones rolled a six to intercept, then broke free and scored the only touchdown of the game. I BELIEVE that time got called during that turn that I scored, so the game was over with me up 1-0.

As a side note, Steve’s Undead team looked fantastic. It was a team that he had gotten from Zlurpcast’s Xtreme. Xtreme is a terrific painter and I would love to have a team painted by him… I just can not afford him. 🙂

This game was probably my only non-stressful game. It went very well for me, and had a couple of funny moments. My opponent was Nathan Kichline, who is one of the nicest guys you’ll ever meet and someone that I have known since right after I first moved to Austin back in 2000 or 2001. Nathan brought an Underworld team, and this game was pretty much a repeat of our match back at ROT Cup. I kicked in the first half and proceeded to pound his fragile players into the pitch one by one. I got the ball from him pretty quickly in the first half, drove down to the pitch and reached the end zone by about turn four and proceeded to stall in order to give myself more time to take players out of the game. I scored on turn 8 putting me up 1-0.

I received starting the second half and things proceeded in much the same way that they had in the first half. I picked up the ball and began pushing my way towards his end zone while causing lots of pain to his players. The highlight of the game happened about mid way through the second half when he attempted to throw a goblin at my ball carrier. The troll ran over, picked up the goblin, but unfortunately, decided he was hungry and ended up eating the poor little guy. Many laughs were had as that is another thing that almost NEVER happens. Then, two turns later… the troll decided that he was STILL hungry, and attempted to eat another goblin. Luckily, this time the little guy managed to scramble away. Feeling bad for the goblins, on the next turn I managed to kill that mean troll so he would not keep getting so hungry. It was at this point that I realized that I had a legitimate shot at pitch clearing him and set to work. Unfortunately, I ended up two players short of pitch clearing him, but again, I scored on turn 16 and ending the game at 2-0.

Looking at the tables ahead of me in Round 2, I knew that my third game was going to be tough. It was going to be Orcs, Dwarves, Undead, or Norse. It ended up being Dwarves, which I was dreading, but I was also kind of stoked because my third game was my first game ever played at the top table. My opponent was Corey Light, who is a nice guy (seeing a pattern here?) and who I have seen at many tournaments over the last two years since I have started playing regularly in tournaments again. Honestly, I do not remember too much about this game either. It was very tense, but I did manage to get a few players off the pitch early which was a pretty big deciding factor. I can not actually remember what the final score was, but I won either 1-0 or 2-0. It was kind of a tense blur.

At this point, being the only coach with a 3-0 record, and looking at the scoring, I knew that all I really needed was a tie and I should still be able to come in first place overall. I was also happy to see that Bryan Tew’s Halflings managed a second tie in Round 3 at the second table, as I REALLY did not want to have to play against him in the final game. You may think, “big deal, he’s only playing Halflings,” but consider this… in Round 2, he pitch cleared his opponent who was playing Undead. To put it mildly, Bryan Tew is really, REALLY freaking good…

Anyway, my last game was against someone that I have never met before. He is from here in Austin but has only shown up to the local scene very lately. His name is Bobby (I can not remember his last name, sorry Bobby!) and he is apparently a Blood Bowl video game player who decided to try his hand at tabletop. Despite needing some help with figuring tackle zones and forgetting to make several rolls, he did quite well, which is obvious since he made it to the top table for the final game. We had Pouring Rain for the weather result, and I chose to receive the kick-off (I want to say that I actually won the coin toss in every game). Even though I managed to make good forward progress on my initial drive, it was clear from the start that the armor/injury rolls were LOVING him. I had not taken a single casualty all day until that game, and he caused four as well as several knock outs. I did not stall as he had too many players threatening my ball carrier and numbers were quickly growing on his side. I scored about mid way through the first half and managed to hold him off until halftime. Being down a couple of players at this point, I was desperately fighting for a tie. Luckily for me, the Pouring Rain was rearing it’s ugly head. The ball landed in the middle of his backfield, and he failed to pick up the ball resulting in a turnover. That short turn allowed me to get a Bull Centaur tackle zone on to the ball, and a Chaos Dwarf and a Hobgblin very close to the ball. He then had another very quick turnover on his next turn, and I was then able to Blitz away one of his players next to the ball and pick up the ball with my Hobgoblin and break away for a second touchdown putting me up 2-0. With only 3 turns left, I felt confident that I could hold him off, even with what at this point were significantly depleted numbers. Unfortunately for me, Nuffle again shined on my opponent as I rolled a Riot on the Kick-Off Table, giving him an extra turn. I did my best, but he managed to walk into my end zone on turn 16 of the game for a final score of 2-1.

With the tournament organizer telling me that even a tie would still get me first place in the tournament, I now knew for sure that I had gotten my first ever first place finish in a tournament. I was exhausted, and my ass was killing me from sitting on those uncomfortable picnic tables all day, but I was happy. I was also happy to learn that I also won Best Defense as I had only allowed a single touchdown all day, and if it had not been for that darn Riot, it would have been no touchdowns all day. Dean, the tournament organizer actually had some really cool, and unique trophies for Bugman’s Bowl. Since Bugman’s is a beer brand, the first, second, and third place trophies were all wooden beer mugs!

The smaller awards were basically skin patches that Dean made out of latex. I am not really sure what the significance of the skin patches are, but my wife was pretty disgusted by it, so I guess that means it is pretty cool. 🙂

Best of all, I got my first ever NAF mini trophy! 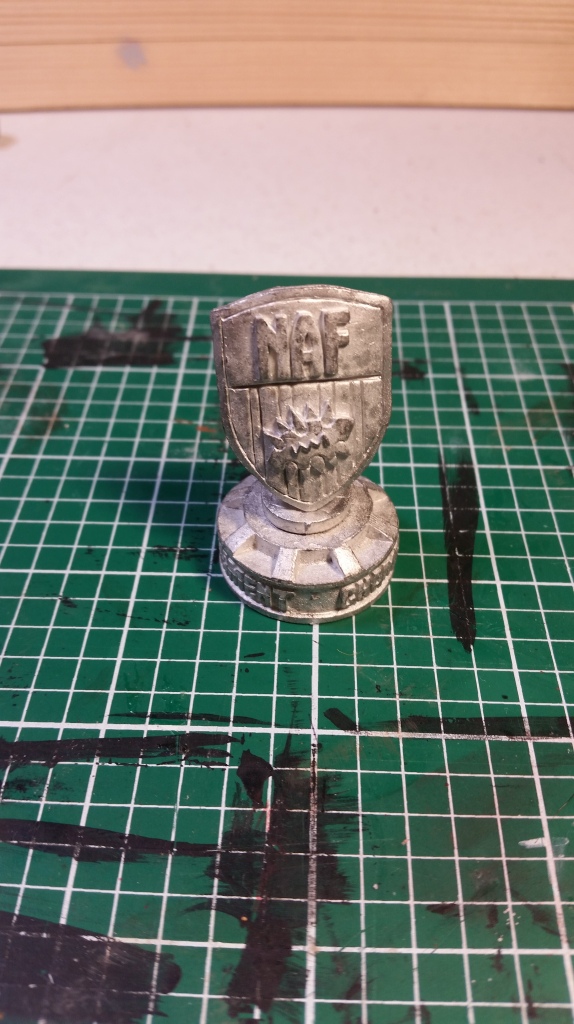 I have always wanted one of these things, but did not think that I would ever manage to earn one.

Finally, Bugman’s was part of the SCARS (Southern Central Amorical Regional Series) circuit of tournaments. Despite never having a top three finish this year, I have attended enough tournaments, and been consistent enough to actually be in second place for the series going in to Bugman’s Bowl. With two out of the top four coaches not attending, and the fourth coach bravely playing a stunty team that took quite a beating yesterday, after the standings are updated, I should now be firmly in first place for SCARS. With only one tournament to go in the series, as long as I do reasonably well at Nuffleween, then I should at least place in the top three for SCARS. If I do very well, I will take first place.

For the record, this is usually the point where I blow it… Time will tell I suppose!