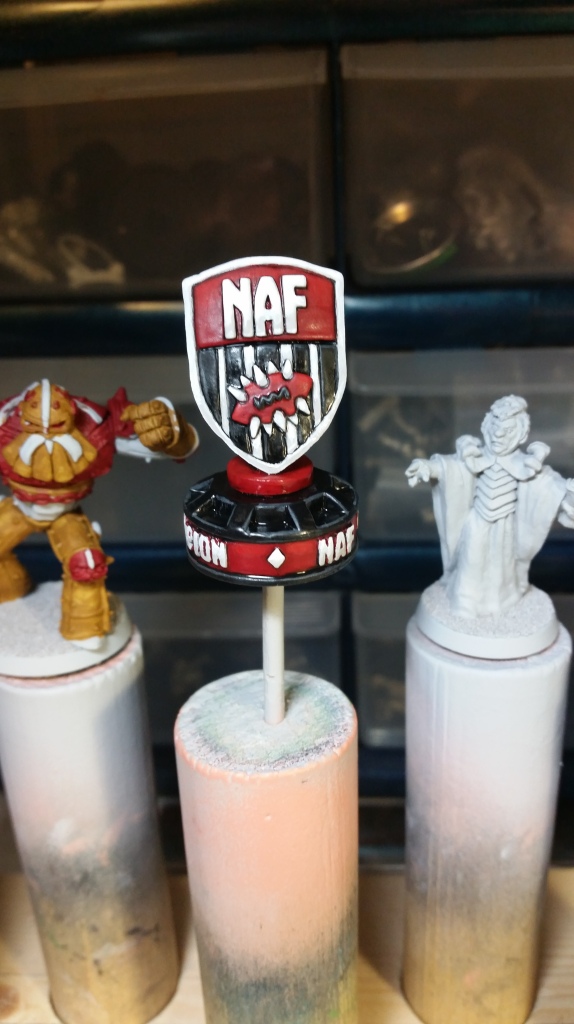 Considering that this mini is basically a collection of wide, flat pieces with few details, it was pretty easy to paint. I think it was somewhere around 2 – 2 1/2 hours of painting time. It is a little hard to see in the picture, but there is some subtle layering on all the colors along with some edge highlighting.

Speaking of edge highlighting… I tried something new with this mini that I recently read about online. I used watercolor pencils to draw the edge highlights on in a few places. I used paint on most of the black edge highlights, but I used the pencils on the red highlights. It worked pretty well once I got the hang of using them. I think I was applying too much pressure at first and the highlights were coming out uneven and small crumbles of the pencil were left around the edge that I had to keep wiping off… which would in turn wipe off the highlight itself. Once I started using less pressure, it seemed to work better, and it is a very quick way to do highlights. If you make a mistake, just take a wet brush and brush away the mistake. Quick and easy.

If you are interested in trying the watercolor pencils, they can be picked up at any Hobby Store for a pretty reasonable amount of money. If you are in the States, Hobby Lobby and Michael’s pretty much always have 40-50% off a single item coupons so you can get a decently large set for under $10.