Forge World snuck a new Blood Bowl star player into their webstore last night (well night here in the US where WSTZ has it’s HQ) those dirty FW rats! We were late to the breaking news but thought we’d give our reactions to the new Hakflem Skuttlespike.

James: It appears that Forge World does their Skaven hairless?  Overall I think it is a good looking model, maybe a bit bulky for armor 7, but I’d let it slide.

Casey: Not sure why Forge World makes all their Skaven go full Brazilian, they must really hate sculpting fur. 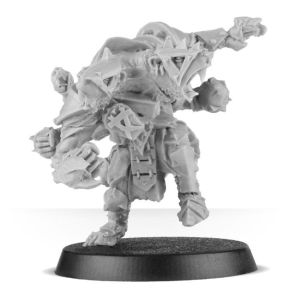 James: I like the sculpting of the model.  Glad to see that he doesn’t have a 12′ tail like the rest of the Skaven team. He is movement 9 so I don’t mind the one foot on the ground pose that seems to be the go to thing with the new Blood Bowl models. I’d like to see a size comparison next to the regular players but overall I like it. Don’t like the hairless factor, I have a much easier time painting fur over skin and the hairless rats look a bit off.

Mike: My first thought is, “ouch, my aching wallet!” Yet another BB product going on sale this weekend… I think it is an interesting sculpt. Glad to see the tail is a reasonable length, and I think that it is a good pose overall. Not a huge fan of yet another hairless rat. I know hairless rats exist … a friend had some as pets years ago, but it feels incongruous with Skaven. A little too much armor on him for an AV7 mini, and yet another Forge World mini with only one foot on the base… d’oh! I give it a “thumbs slightly up from sideways.”
Casey: The bonus of him having so much armor is you don’t notice that he’s mostly furless for the most part. Seems a decent model, not as good as Griff or Zugg but I like him better than the rat ogre or Varag.