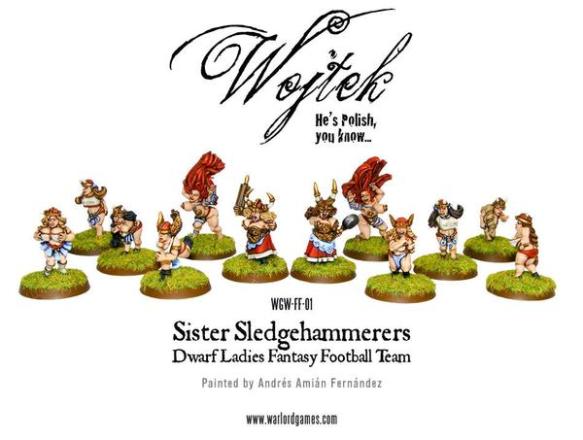 So, a while back I bought a team of silly female Dwarf minis from a company called Warlord Games. I thought they were hilarious because they were a Dwarven take on a “sexy” female team. If that doesn’t make you chuckle while shaking your head, I don’t know what will! Anyway, I already had a Games Workshop 3rd edition Dwarf team at the time, and shortly after, I picked up the fantastic Iron Golems Dwarf team. I painted both of those teams and even picked up a couple of Best Team trophies at local tournaments for them. Even more recently, I bought the Games Workshop 6th edition Dwarf team. So the question now is, do I REALLY need four Dwarf teams? The answer is a resounding, NO. What does that mean for you? It means that it’s time for Wyrd Stones and Tackle Zones’ very first mini giveaway!

What exactly are we giving away? Well, we are giving away a full team set (12 miniatures) of the Sister Sledgehammerers Dwarf team by Warlord Games, plus an additional booster pack of 4 additional Hand Maidens (Blockers/Longbeards). As an added bonus, we’re even throwing in a Star Player Miniatures Bloodweiser Beer Girl mini.

What do you have to do for a chance to win? That’s the easy part! To be eligible to win, you just need to Follow the site, Like the Wyrd Stones and Tackle Zones Facebook page, or Subscribe to the Wyrd Stones and Tackle Zones YouTube channel. The winner will be randomly selected from all the users Following, Liking, and Subscribing via each method. In fact, doing more than one will give you more than one chance to win. This is a nice chance for someone to get some free miniatures, and for me to get a free spot cleared off o the shelf! As a side note, anyone who has already Followed, Liked or Subscribed will also be eligible. The giveaway is not limited to new users.

Please be aware that the minis are slightly on the small side of the 28mm scale.

Here is a picture of the Bloodweiser Beer Girl next to a 3rd edition Dwarf. Obviously she is not nearly as chunky as the Games Workshop mini. The Sister Sledgehammerers minis are very close in size and scale to the Bloodwesier Beer Girl.

The winner will be randomly selected on September 30th!