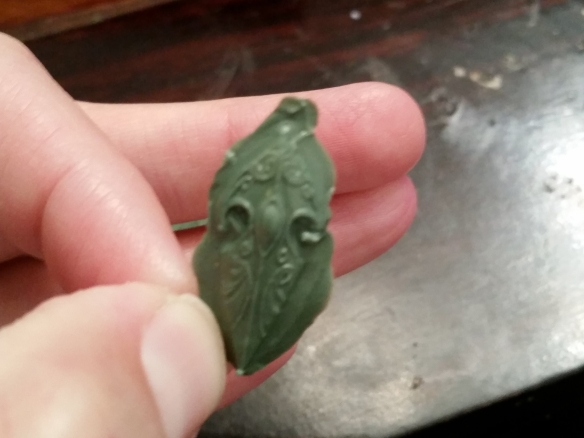 As I mentioned in my last post I’ve been working on some conversions for the Middle-earth Strategy Battle Game. Specifically, mounted Gil-Galad, mounted Glorfindel and armored and mounted Lindir. This is an update on my experiments.

I’d seen some videos on using reusable plastic for molding making and green stuff which you can view for yourself here and here and there are many more tutorials on YouTube and across the interwebs. I ordered some oyumaru on ebay and it came over from Japan or Taiwan (can’t remember exactly) and it’s pretty neat stuff. You boil some water, drop the plastic in and let it sit for a little while. Pull it out with some tongs or other utensil and it will be fairly hot to the touch, but squishy and pliable. It’s pretty fun to play with, but as it cools it hardens, but that’s what makes it so great for press molding.

My first attempt was doing some Lord of the Rings high elf shields, as you can never have enough shields and I figured they would come in handy for all sorts of conversions. My first attempt had a lot of flash, but was easily trimmed. I apologize, I was not very diligent about taking photos during this whole process, so I don’t have any pics of the molds or the finished shields.

But I did two or three of them and they came out good. The second time I did it I used less green stuff so I didn’t have as much flash.

After that I tried doing a more 3D object, so I tried to do Lindir’s head. At first I was pretty pleased with the detail and thought with a little flash trimming it would be perfect. It turned out the two halves of my mold weren’t aligned very well so the back half of his head didn’t match up with the front. And then trimming the flash tends to ruin a lot of the fine details on the side of his head where he has a fine circlet going around his hair. A tried a few times again with no better results. 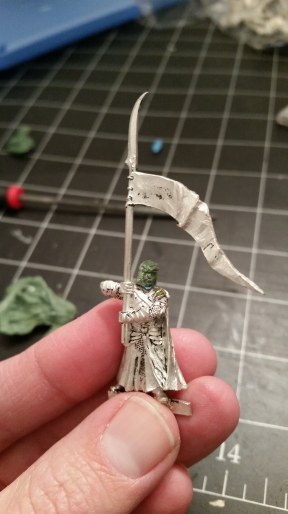 Next I tried again, this time doing a full-body mold of Lindir to see if I could get something better. The detail in his head was all wonky and ugly. I chopped the head off the body anyways to see if it would scale well on the metal banner bearer. Seems like it should.

I tried doing Glorfindel too, who has less fine details and is mostly helmeted. It didn’t come off 100% either. On the Great British Hobbit League Facebook group, someone suggested doing silicone molds to capture the heads. I thought this might work because if you just do the head, and pop it out of the mold you might be able to do it without any seems. I did some research and found this nice tutorial, he uses a product called Liquid Blue Stuff that cures in 15 minutes, but isn’t available in the US. Instead of ordering some last week I took my 2.5 year-old daughter with me on a 40-minute drive into the city to get some Smooth-On OOMOO 2-part liquid silicone rubber.

Last night I got all set up to start my first experiment with silicone press molds. For Christmas my wife got me a nice clip-on lamp/magnifying glass for painting minis. It clips right on the edge of the table, it’s pretty neat. It also has two little adjustable arms with clips for holding things you want to inspect under the magnifying glass. I thought this would be perfect for holding a mini upside down while its head is submerged in the curing silicone. I opened up my SmoothOn and reading the instructions I realized I purchased the wrong stuff, I got the OOMOO 30 which has a 6-hour cure time instead of the OOMOO 25 which has a cure time of 75 minutes.

I’ve also read that some people prefer to mix their green stuff with Milliput as it holds a finer detail and cures harder. I also spent a good portion of last week trying to track some down at local stores, but found they either didn’t carry it or have it in stock.

After all this, last night I was rather frustrated. I didn’t want to use the 6-hour cure time silicone because I do most of my hobby stuff after the kids go to bed. I could wait 75 minutes for the silicone to cure, but leaving all my gear out all night would mean I’d have to clean it all up in the morning. I packed my stuff up and instead started looking some more at the minis I had on hand that I’ve been planning on using for my conversions. Trying to make a silicone mold of Gil-Galad’s head is going to be tricky as his spear gets in the way of getting dunked head first. And trying to fit a shield on either of mounted Elladan or Elrohir is going to be tricky, unless I put the shield on his back as I’ve seen others do. And the whole thing with wearing shields on your back … well it makes sense for traveling but not so much for battle. All this has me thinking of switching over and working off the plastic Rivendell Knights models. They really are some fantastic looking minis and plastic is quite a bit easier to work with. The silicone mold method would be handy if I could get it perfected, but at the same time for the cost of the silicone I could probably buy the minis I want bits from and it wouldn’t be that much more expensive.

So where do I go from here? Here’s what I’m thinking

Lindir: Maybe not even bother with an armored version, just use the official GW model as is. If I made an armored version, would I then ever use the official model? For the mounted version I could just do the Rivendell Knight captain. I could replace the lance with a sword, or just leave as is so he can double up as a captain or Lindir.
Gil-Galad: Use a Rivendell Knight body on a Morgul Knight horse. Trim off the spikes on the Morgul Knight horse, but it’s got barding and armor plates that have that elvish curve to them that I think would be nice for Gil-Galad’s armored horse option.  I could also use the Rivendell Knight captain head, or see if I can get a second Gil-Galad used on the cheap and do a head swap. Or I could just get a second mini of him and do the headswap on one of the mounted twin models that I have, put a shield on his back and green stuff/plasticard armor onto his horse.
Glorfindel: Pretty much same here, I can get a second Glorfindel model and do a headswap on one of the mounted twins or a plastic Rivendell Knight.
The thing is, I could get three characters out of 1 box of Rivendell Knights, which is $50. Or just use them for my conversions. The upside to the metal mounted twins is they look more armored up than the Rivendell Knights and closer to the Gil-Galad and Glorfindel minis. A downside to the Rivendell Knights is they all have quivers/bows on their backs so I’d have to trim those off, but they are still plastic which is easier to work with.
Stormcaller: So I had this idea of converting a Galadriel model with the head of the old Arwen model and adding a staff to use as a stormcaller and say it’s Celebrian Arwen’s mom and Galadriel’s daughter. While I think this could be cool, it would require some fussy hair sculpting and the project is kind of frivolous because my friend said he’d trade me an actual stormcaller model.

2 thoughts on “Under the hobby knife: The troubles with press molds”