Check out that lovely chair our neighbor gave us! We have a very trendy interior design style, it’s called “free chic.”

I’ve been trying to figure out the case situation for my minis for a little while now. I’ve been using the deluxe box of the Willy Miniatures Ratmen Team that I unboxed a few months back to get my Blood Bowl stuff around to my league games. And it’s been fine. But I’ve also recently gotten into the Hobbit Strategy Battle Game which requires quite a few more models than Blood Bowl. Not hundreds of models, but dozens. So I need a solution for that too, as well as my BB team.

On Thursday Jeff sent me an email about a post he saw on a Shadespire Facebook group where some guy found a hardshell case with pick and pluck foam insert at Sam’s Club for $20. I don’t happen to have a Sam’s Club membership … but my mother-in-law does! Today my wife was running errands with her mom and they went to Sam’s Club and found the aforementioned case and a bigger case with roller wheels. Both on clearance for about $19. I told her to grab both.

After the kids went to bed I pulled off the packaging of the smaller case without tearing it so I could open it up and check it out, and if I decided against it I could return it. The case is solid. It’s pretty bulky, like a big brief case. It’s got four clasps and an internal pressure dial thing. It’s clearly meant to handle sensitive and expensive things like camera gear, firearms, drones, etc. Inside there’s a dimpled foam layer on the lid and then three layers of foam. One is pick and pluck foam, the other two are just solid foam. Each layer of foam is just shy of being 2 inches thick. There’s definitely enough room to fit a Blood Bowl pitch and dugouts in there. Funny thing I hadn’t noticed, the dugouts are actually longer and wider than the folded up pitch. 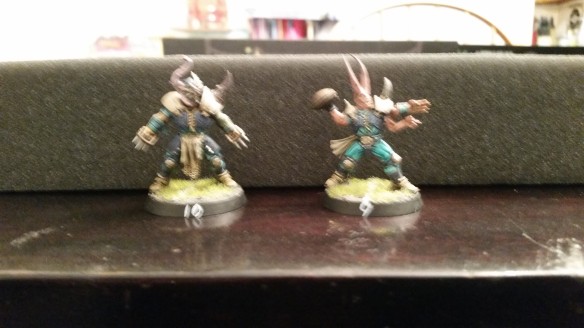 Sorry the photo is blurry, but you get the idea.

How many miniatures could I fit in it? Well if my math and diagrams are correct, I could make 54 1″x1″ holes, assuming I can stand my minis up in them. Some of my BB minis have horns and spiky bits that might protrude a bit. But with a layer of foam on top and below plus the dimple foam and the hard case I’m guessing they would be fine. Still could be a risk. If I do 1″x1.5″ holes then I could fit 43 models. Of course I haven’t taken into consideration big guys, which would require bigger areas as well as the Skaven with his pesky tail, which is still attached by the grace of the Vermin Lord!

If I just played Blood Bowl it wouldn’t be a problem, but I’ve also gotten into Middle-earth Strategy Battle Game. You’d think this would be even easier as they are smaller models with smaller bases, but a lot of them have spears which are going to stick out a lot in the “stand them upright” scenario. And cavalry have even bigger bases than BB, 40mm vs 32mm.
Of course the bigger case is even bigger. I couldn’t get the packaging off this one, but I’m guess it only has one layer of pick and pluck foam as well. And it’s suitcase big. With rollers. Probably wouldn’t make it on an airplane as a carryon. It would fit more minis, but I’d kind of feel like an idiot rolling it into wherever I’m gaming. It’s usually the game store so it wouldn’t be a big deal, but my last game I had to go into the city to my opponents dorm. I had to walk a couple of city blocks to get to his dorm building. It would however be great for traveling to PitCon or other events. I think if I was someone who played with really big models … hmm maybe I should throw down $500 on a Smaug model … it would be good to transport just those models.
Now that I’ve seen these cases and watching a couple YouTube reviews, I think the Citadel Skirmish case is the case to go for because it’s so versatile. Once I pluck out the foam on this one tray it’s done, there’s no adapting it to fit other models. And hearing tales of people fitting 80+ models in the Skirmish case is nothing to sneeze at. I’ve also heard some people say you can fit the Skirmish case in a backpack.

1 thought on “The case of the perfect case”