Its been an unprecedented flurry of painting these past few months.  Its mostly out of fear up my new schedule that is about to start completing crushing what little free time I have.  Fear is apparently a good motivator as it has enabled me to keep up with the Tale of Tuesdays posts to get this extended project closer to the finish line!

I know have a fully functional 15 man roster completed for the Necromatic side of my Undead conglomeration.  Finishing off these last zombies was a bit of a drag.  After dealing with the sharp details of the Vortice miniatures to these older less detailed models was tough.  First we will start with the fun part:

The second Flesh Golem was as much a pleasure to paint as his counterpart.  The large sharp details made for a easy painting.  I don’t think I replicated the flesh exactly as the other as there was more contrast in the recesses that the previous one.  Still, I think it turned out well. 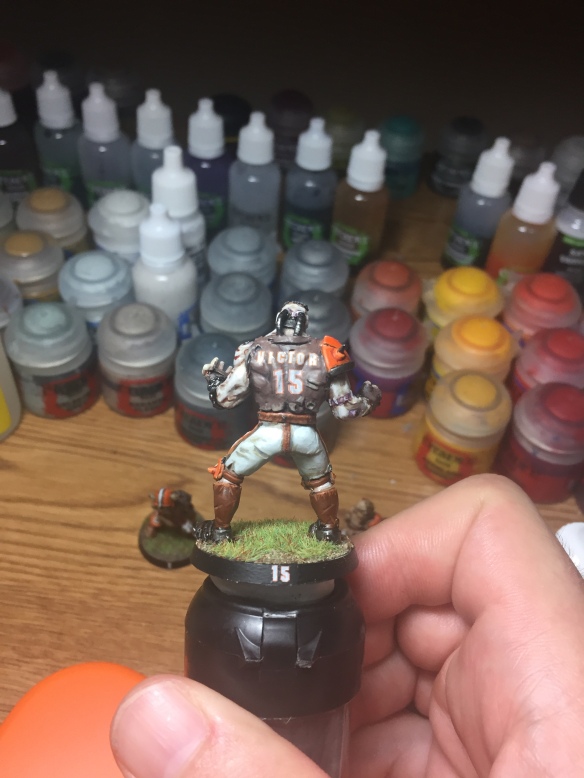 I again added a name on the back of his jersey at what better than Victor from the old arcade fighting game Darkstalkers.  My friend Jeff deserves the credit on that one.  The name was a bit of the challenge due to the tight and stretched nature of his shirt but I am pleased with the results.

I again tried to add some texture to the boots to break up the large flat leather areas.  Its a technique I certainly need to practice but so far I think it works well.  With Victor finished it was time to move on to the zombies… 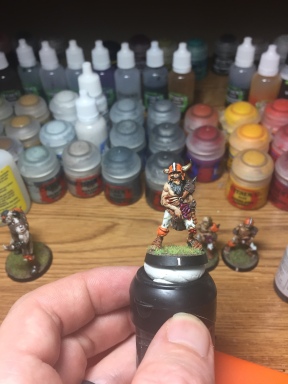 If you recall back in this endless series I was concerned about the fact that these zombies were pretty much naked which meant they would kind of stand out from the rest of the time.  Due to some rather lacking details on what exactly was what on these models I decided to paint some pants onto them to help blend them in. 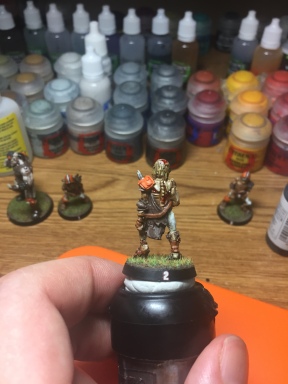 The results were varied as some of the models turned out well and others are kind of okay at best.  Additionally to the lack of pants there was some issues with the details on the faces.  Zombie #1 was my worst paintjob by far but thankfully from arms length its not that noticeable. 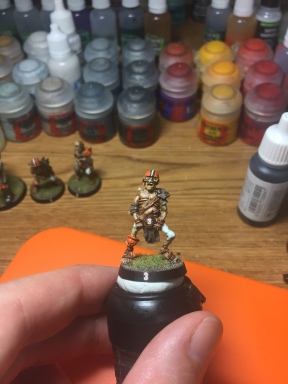 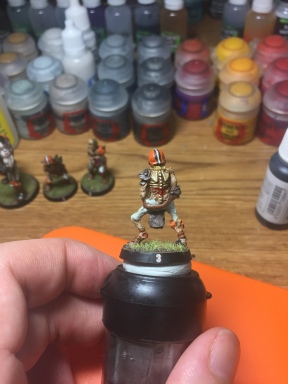 All of the models have duplicated details to some extent so I opted to change up colors and styles to make them less noticeable.  The spots of blood helps break up the similarities.

At this point the teams are almost finished with just a skeleton, coaching staff, and a random star player left on the to do list.  Hopefully next month will see this project finished and enable me to move on to the next one.  Fingers crossed!

4 thoughts on “Under the Brush: Tale of Tuesday Cleavedhead Barrows pt. 5”