Having been around the game of Blood Bowl for 25+ years, it takes a special look to get me excited about a team. Well, it takes that 2nd edition ‘fantasy sports’ look to be precise. I’m not sure if that style was once called ‘cyber sports’, but in my circles we just call it the ‘2nd edition look’. I’ve sort of passed along teams from the 3rd edition ‘Warhammer Army’ era, and have yet to pick up a team with the current GW ‘Gladiator’ (for lack of a term) aesthetics.  In the past 3 years the most recently produced team I’ve fielded in a game has been the plastics from the 3rd edition box…and this is the most prized Blood Bowl book on my shelf:

I think you see where I’m coming from.

So…with those leanings I am trying to make an effort to not just stick to Oldhammer minis, but to find, and support, companies that are currently producing content for the game, _but_ with that style that excites my nostalgic and creative juices.

One such company is Iron Golems from Spain.

Near as I can tell, Iron Golems came onto the scene with their Pedro Ramos sculpted dwarf team that was crowdsourced in 2015. I missed this fantastic squad, but was sure to go all in on their sophomore effort…the Pro Box. The Pro Box is a complete game (minus rules) that includs a human and dark elf squad. Fantastic minis that along with their dwarf team have become my favorite teams of their respective races, with all three having deep nods to their ancestors of 2nd edition. Not to mention that Iron Golems also procured the talents of 2nd edition artist, Pete Knifton, for token art in that Pro Box. In many ways, the Iron Golems Pro Box is the new Blood Bowl edition I craved.

But let’s talk about their current offering…

When I first saw the above banner, I wasn’t sure if this team was for me. I was hoping Iron Golems would continue to bat 1000, but I had pause. Wood Elves weren’t a unique 2nd edition team, nor was I familiar with the sculptor, Lucas Pina. So, in anticipation I poured through many images of Lucas’ sculpting…and they were gorgeous. I immediately afterward told my buddies, this was going to be the elf team to get and that the sculptor has a great handle on making unique, colorful faces – something often times lacking at 28-32mm.

Sure enough, as images of the team started to float out on social media, my prediction was proven correct. In fact, this line-elf right here may be one of my top 3 favorite Blood Bowl sculpts. 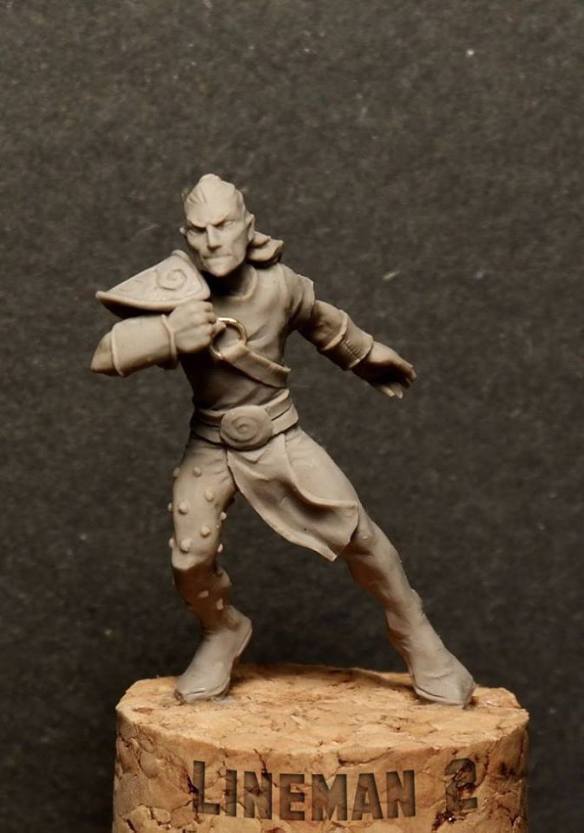 Not only is the sense of weight distribution on point, but that grimace is the business. From these following images, you can see that the high quality of the hand sculpted minis continues to run through the team. There’s a real sense of grace and agility here without the minis flipping, jumping, or doing handstands. These are beautiful, static sculpts that convey speed but are also suitable gaming pieces…’staying in their lane’ as it were.

Now, again, there isn’t a 2nd edition Wood Elf team for me to compare this squad to, but we do see the classic hockey mask and studded pants. To push this team further into the realm of potential 2nd edition stylings, Iron Golems is going to offer a ‘Pro Elves’ upgrade kit once the campaign hits 13,000 Euros. I’m looking forward to this as I think just a few more touches here and there and the team will be exactly what I’m looking for in a non-Dark Elf Squad…with IG already having mastered elves that lean that way…

Oh, let’s not forget that Treeman. What a lovable goof. I’m not sure what he’s doing here, but it looks like he’s gotta hold something in. Perhaps waiting for that dastardly werewolf to come by again (a little 2nd edition joke there…).

Now, it’s not all 6s though, as there’s one model that came up skulls for me….The Dryad Star Player.

This model will come free with the team when the campaign hits 16,000 Euros. It’s nice to get ‘free’ minis, but with this model the team attempts to go laterally for me with two big strikes. One, I’m not sure why plant based lifeforms have mammaries, much less nipples. Fortunately, this is sort of an easy fix with the trusty sculpting knife and green stuff. I hate to do that to Lucas’ work, but so be it. The second, and biggest, offense to me is that this model seems to be a bit more on the ‘dark’ side. It reminds me of the current GW grimdark dryads and not close to anything humorous or satirical as I’d find in my old Blood Bowl hardbacks or even within this team. Lots of smirks,cockiness, and swagger amongst this elf team…and a little levity in the big stump back there, but this sort of Fear of the Dark tree creature feels out of place.

Still, one model can’t chop this team down. From initial hesitation to going all in on another Iron Golems project, I’m glad independents are still putting out teams of all flavors in this modern era of Blood Bowl. I’ve just _got_ to finally learn how to paint checks…

If you’re interested in getting this team yourself, you can support Iron Golems at their live Kickstarter campaign here: