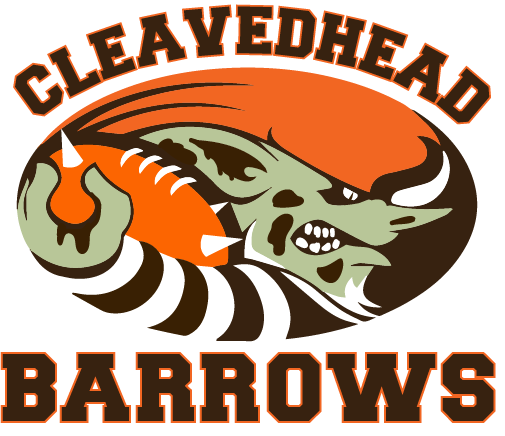 So word must have gotten out at work that I had a few minutes of spare time in the evening as it seems since my last update my work load has been grown exponentially.  Despite the lame hours away from home and family I have been slowly chipping away at my undead team and have a status update for everybody.

First up is some updated shots of my skeletons and zombies.  I was able to get the models based with static grass and finished up some of the minor details like blood oozing out of the zombies.  I am missing numbers still as I am not sure what route I am going with on them.  I ordered up some custom-ish numbers from Bedlam Creations going with white numbers with an orange outline.  These would work perfect with the models except that not all models have open spots available on them for numbers.  I did get a number 1 onto a skeleton but the number ‘plate’ had a rather inconvenient whole in the middle of the plate that swallowed the number.  I may resort to going with number bases, which is fine, but either way I’ll be saving the transfer work till last.  On to the near complete models! 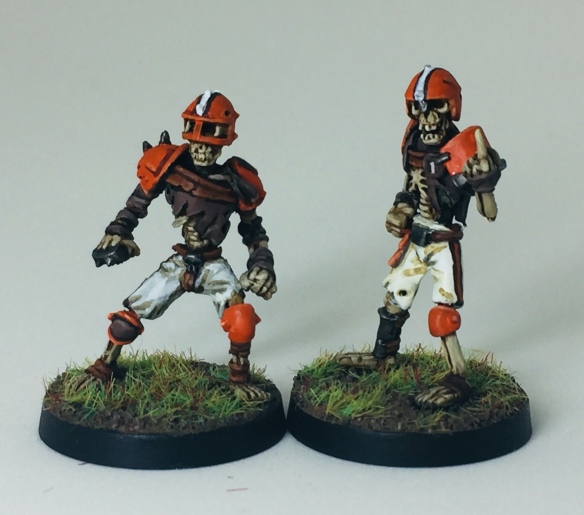 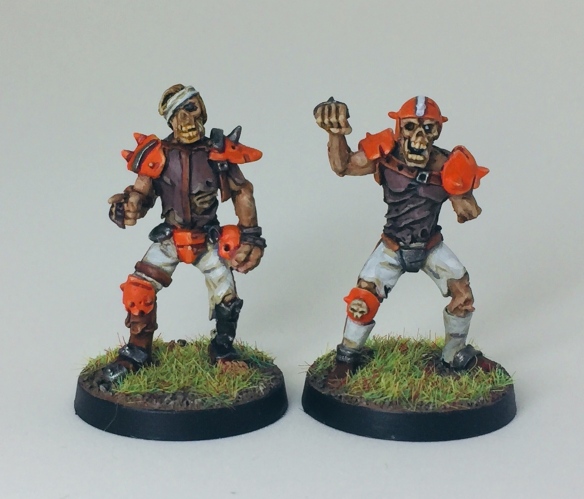 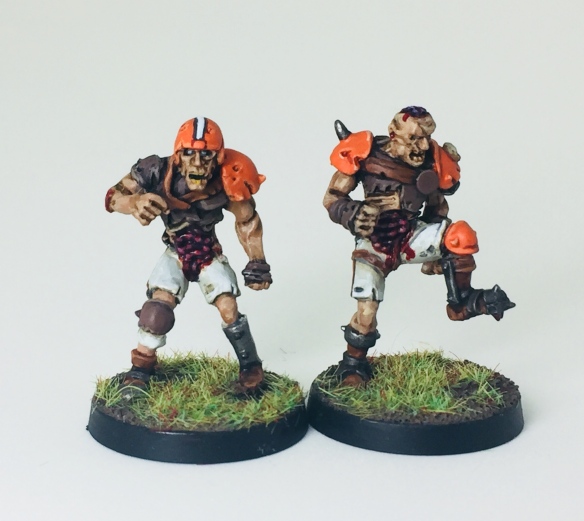 Forgive the changes in color tones on the models.  I’m using my IPhone for a camera and I am having a tough time getting consistent results so I had to use some editing on the brightness to get the pictures to show up decent.  Overall I am pleased with the outcome of the models.  The white tone on the pants for the skeletons was a bit off do to me trying to get the desired look, but on the table it doesn’t look very noticeable.  With the meat shields finished I moved on to the ghouls.

As far as this team is concerned I think the ghouls are packed full with some very challenging details.  Between their large number of straps and long nails they were certainly a rewarding challenge to paint.  My main concern at first was what color to go with on the skin.  GW has lately gone with an almost white color but I thought that would clash with the white pants.  Grey was suggested, and while that would compliment the orange on the uniforms, I instead opted for a very pale flesh color.  It worked well in the end although my one area of complaint was the claws.  I attempted to give them a dirty appearance but I think there was too much contrast in the colors.  Here they are in their 90% completion. 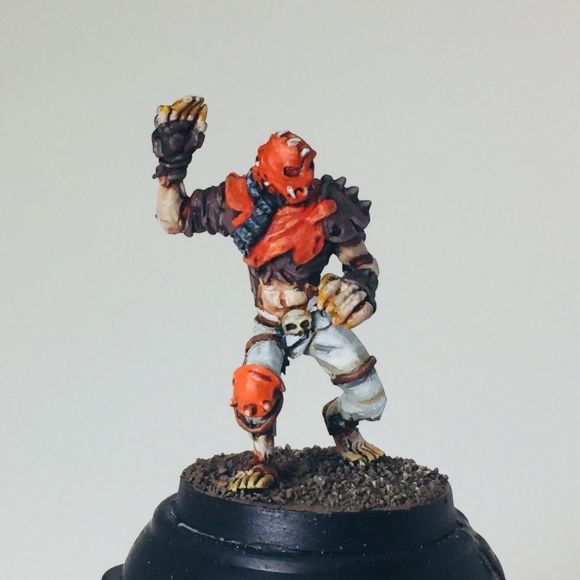 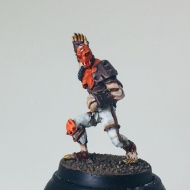 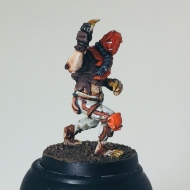 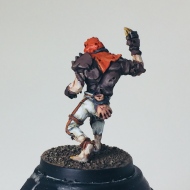 Since they are not wearing helmets I opted to do the stich work on the fabric in white to give a similar nod to the white stripe on the helmets on the skeletons and zombies. 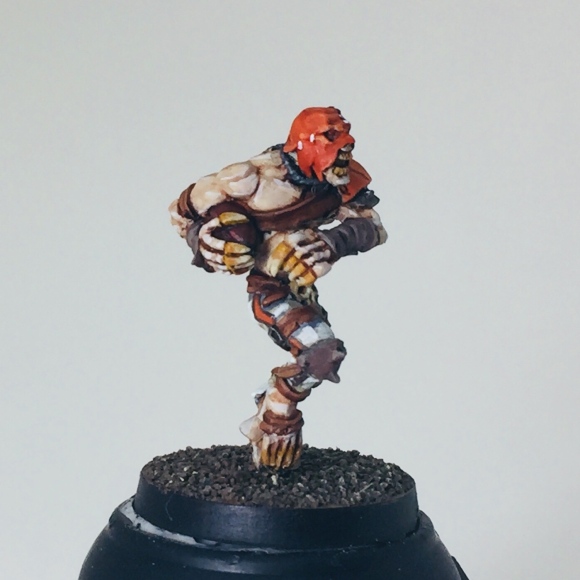 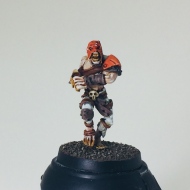 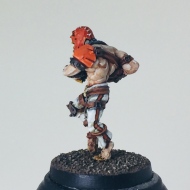 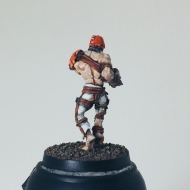 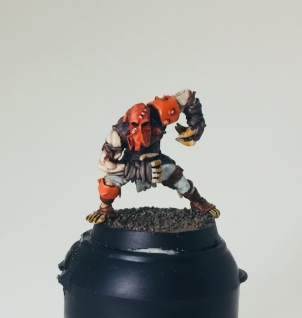 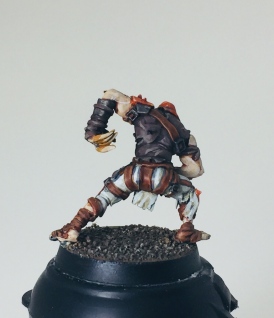 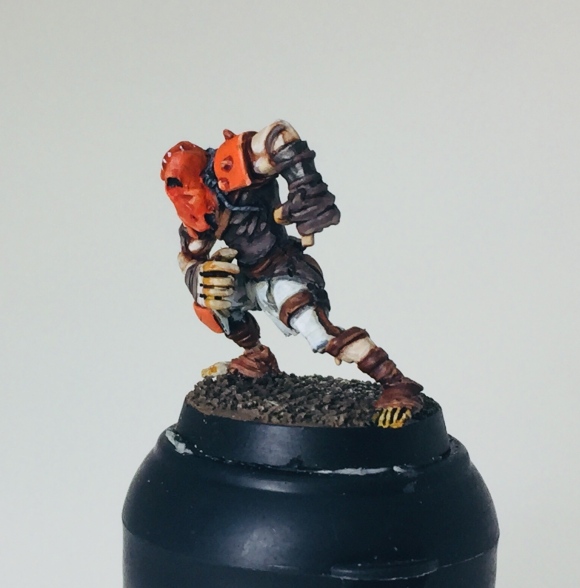 The ghoul above reminds me of the scarecrow from Batman so I left the eye holes in his mask extra dark to make him more sinister. 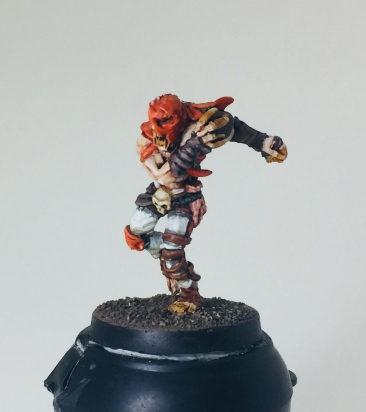 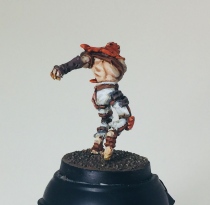 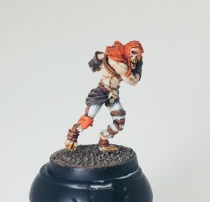 You may have noticed that a few of the ghouls brought extra hands with them on their belts.  I’ll probably add a little blood technical paint and then get the static grass on.  Although these models where a challenge to paint I feel that they are perhaps the best sculpted models on the team.  While a bit of a manicure may be in order, I like these models a lot and I can’t wait to see them on the pitch.

The remaining models I think should go quicker than these four.  The Flesh golems and Mummies are so large that their details should be easy to paint and the Wights seem to be a rather straight forward to paint with the only question being to have the cloaks be orange or white.  Unfortunately I am going to be out of the country soon so I may only get one more update in before this project will get shelved.

Hope everyone had a great holiday season and hopefully I’ll have more progress soon!

8 thoughts on “Under the Brush: Cleavedhead Barrows Pt. 2”