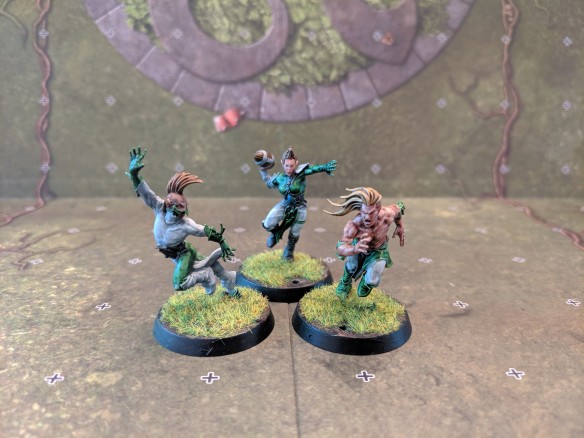 I’m back again with the next installment of my wood elves for Tale of Painters’ Tale of Tuesdays Blood Bowl painting challenge. For my next three models I painted one each of the wood elf positionals. Catcher, thrower and wardancer. 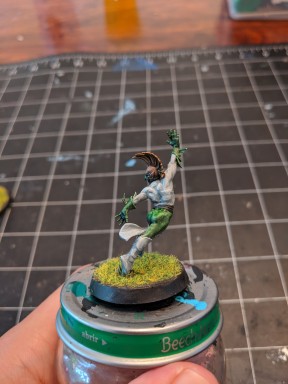 While I started all three models at the same time, I really struggled with the flesh tones on the wardancer and the thrower’s face, so the catcher was finished first. Again here upon painting I realized I didn’t properly fill the crack on his butt (that sounds a bit awkward, doesn’t it?).

I gunked up the thrower’s face pretty good on my first attempt, so she ended up taking a bath in LA’s Totally Awesome to strip her again. Fortunately the new contrast paints and inks I used came off really quickly but left my zenithal prime intact. I did the face first this time, and once I got it looking humanoid enough, I finished her off. 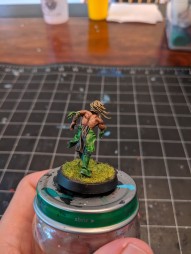 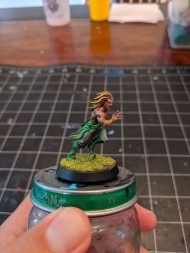 The wardancer was the one who gave me the biggest struggle. This is the first model I’ve painted that has so much human (well elven, but you get the point) skin. He ended up taking two baths in the stripper. Once I had the thrower’s face done I felt confident enough to do the wardancer. The skin is still a little rough, but it’s at a point where I know if I try to smooth it out more I’ll end up screwing it up. So I’ll call it good enough.

That leaves me with half the team completed! Which also happens to be a Blitz Bowl squad, which in case you missed it, we came up with some house rules for. I’ll leave you at the end with shots of the team on my brand new board. I know the pics make the board look much darker than my standard Blood Bowl grass basing, but to the naked eye they look pretty good on the summer side. 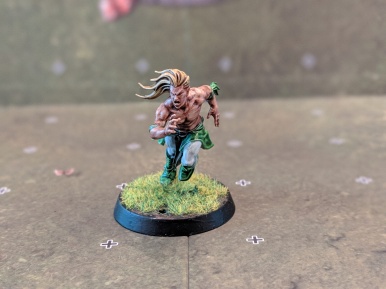 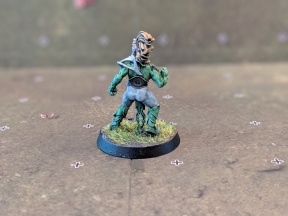 2 thoughts on “Under the Brush: Tale of Tuesdays Wood Elves #2”