The NOVA Open tabletop wargaming convention started today, and with the convention came a closer look at the upcoming re-release of Necromunda from Games Workshop. As reported on the Warhammer Community website, Games Workshop demoed the game for attendees… and my how the game has changed.

Let’s start by taking a quick look what comes in the box. 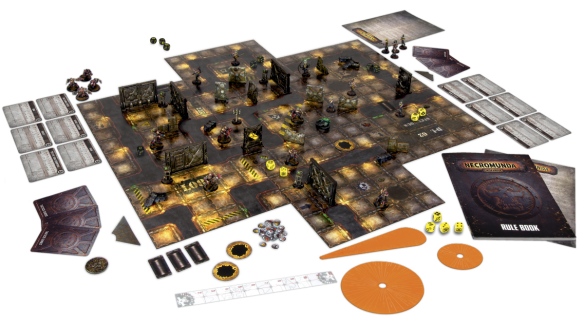 Notice anything different there? Gone are the awesome plastic bulkheads and cardboard terrain in the original box. In there place are cardboard tile pieces, essentially turning the boxed game into a board game.  (I removed this line as it some readers seemed to take exception. I am not suggesting that Necromunda will simply be a 100% 2D board game like Space Hulk and Warhammer Quest.) Apparently, the idea is that the contents of the box provide for sewer combat gaming. Luckily, it is reported that the rules cover 3D vertical gaming for those of us who greatly prefer tables covered with terrain as opposed to tables covered with cardboard tiles. There are also two different sized blast templates, a flamer template, counters, cards (much like the new Blood Bowl), rules, and dice. Using the new Blood Bowl box as a reference, I expect this box to retail at about the same $100 price tag, though there is zero official word on that yet.

On the plus side, the plastic multi-part minis that come in the box look light years beyond the original plastic minis in the last Necromunda box. In case you haven’t seen, the box will come with Escher and Goliath minis, and a high level of customization out of the box is being promised. It even sounds like hairstyles will be customizable, though there is no word yet on exactly how. 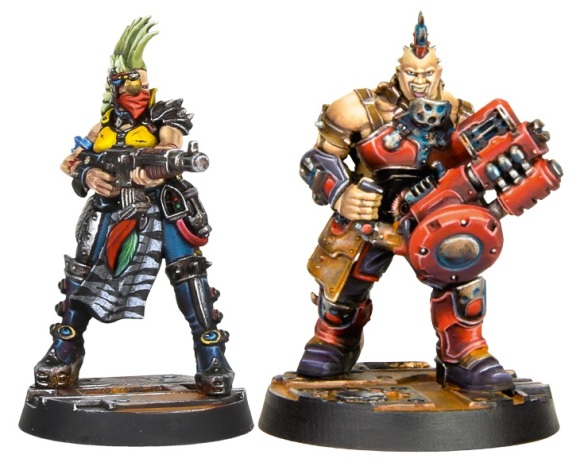 The Escher mini on the left has already been shown, but the Goliath on the right is a new mini. I know some people online have voiced displeasure with these new minis, but I think they look great. 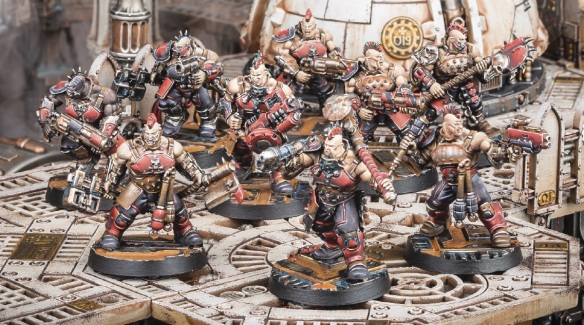 This Goliath gang on Sector Mechanicus terrain is what I visualize when I think of a Necromunda table. 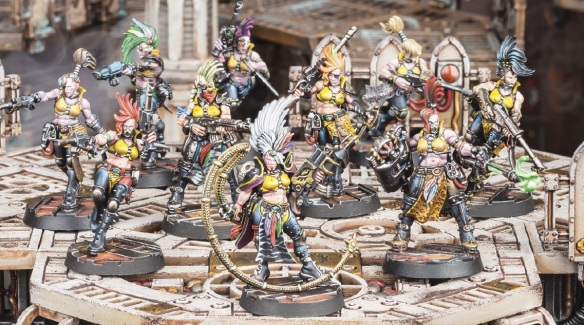 A nice shot of the full Escher gang on Sector Mechanicus terrain. 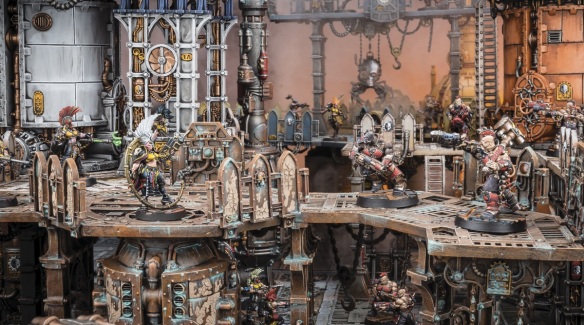 See, doesn’t this look cooler than a board game? According to the Warhammer Community website:

“As well as the underhive style of play covered by the boxed set, there will also be ways to play Necromunda with the multi-level skirmishes that defined the classic version of the game. These work great on tables using the Sector Mechanicus terrain sets released earlier this year (great news for anyone who built a Shadow War Armageddon board).”

So, there will be a couple of different ways to experience the new Necromunda.

Here are a few extra pics of the Necromunda demos from NOVA Open: 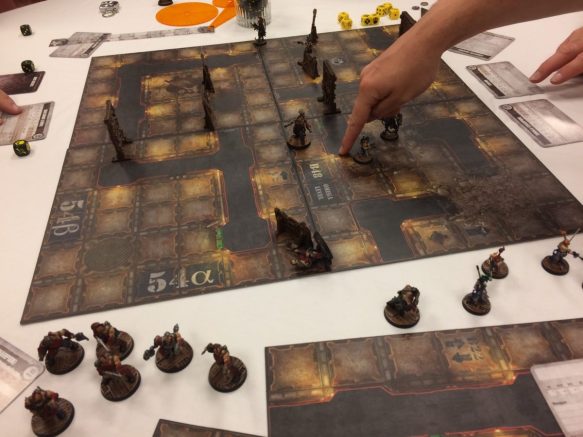 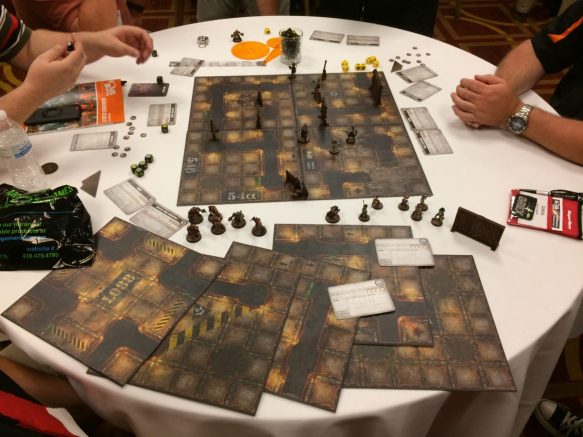 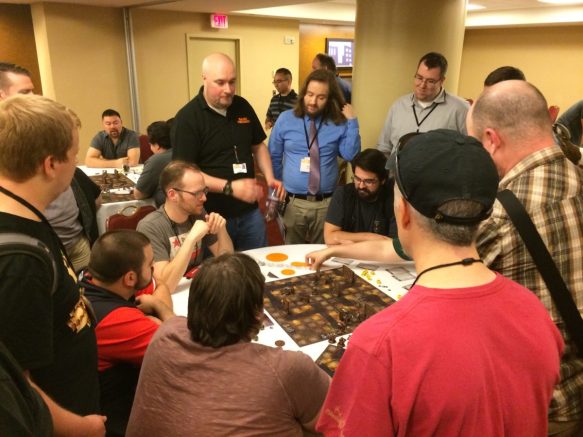 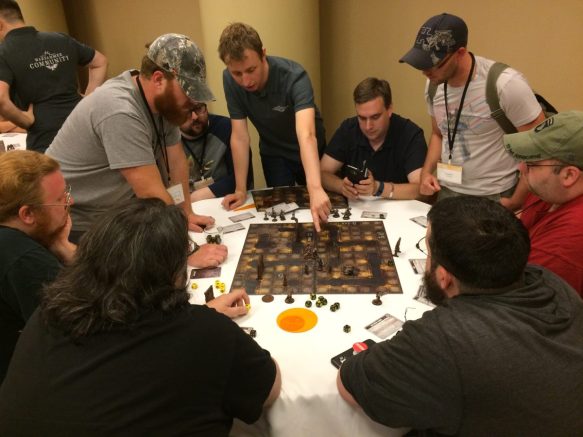 That is all of the official information so far. At this point, Casey and I will discuss and debate what we know about the game, and give our opinions of what we have seen:

Parts of this are more than a little tongue-in-cheek.

Mike: Necromunda as a board game? Are you frikkin kidding me? BOOOOOOOOOOO!

Casey: I’m actually down with it. The idea of playing Necromunda on a set of tiles like Space Hulk representing fighting in tunnels and sewers or scavenging the ruins of a wrecked space hulk has been brewing in my mind for a couple of years now.

Mike: I think the idea of bringing the fight into the sewers isn’t a bad thing, I just think that the execution was poorly thought out. Necromunda is a game that really came alive with the terrain. The right terrain helped make for incredible games, while poor terrain… or none at all could contribute to a really poor experience.

Casey: GW has all that terrain for sale already, so the new box set kind of serves as a ploy to buy more stuff. “Wanna play outside the sewers? Come pick up the new Sector Mechanicus terrain!” Also it would kind of alienate all the people who bought into Shadow Wars: Armageddon who are already feeling a little miffed the new Necromunda is based on 40k 8th edition.

Mike: Honestly, I feel like this move encourages players to get their terrain elsewhere for cheaper prices. There are some companies making really nice laser cut MDF industrial terrain for MUSH less than Games Workshop sells their plastic terrain kits for. It just doesn’t feel like Necromunda to me without terrain in the box. It makes me wonder IF we ever see a Mordheim re-release if it will also just be a board game rehash.

Casey: I’m pretty sure I’ve seen somewhere, possibly Warhammer TV during a Q&A that Mordheim is definitely not happening. Including terrain and new models in one box would probably make this pretty pricey. SW:A is actually the last box set I can think of that actually had proper terrain in it. Let’s talk about those new minis though, what do you think of them?

Mike: I still think that they could make two different boxes. One with cardboard tiles, and one with plastic terrain. I would gladly pay more money for the latter.

As for the minis… That’s actually one thing that I think Games Workshop is doing well this time around. I think the new minis look great, and are in a whole different league than the sad plastic minis in the original box. I definitely like that they will apparently be traditional multi-part minis, and not multi-part minis like the new Blood Bowl releases. The more customization they can give us, the better!

Casey: Two boxes involves producing another box, having warehouse space for two boxes and shelf space in stores for two boxes, shipping two different size boxes can also be a consideration when you’re producing stuff like this. Seems like a lot of work for two versions of one product. Then how much do you produce of one and not the other? What if one isn’t selling as well as the other. I dunno just sounds like a production headache I would want to avoid if I were in charge of this project. Maybe GW could offer a terrain bundle online to go with it.

I agree the new minis look great and way better than the minis that came with the original Necromunda. We never bothered with those and moved straight on to the metal gangs. These new multi-part plastic minis are legit. And after having used some of the genestealer cultists models recently, they should be a real pleasure to work with. I think the new Eschers look great. I can’t say they are an upgrade over the old Eschers because those are some Jes Goodwin classics and some of my favorite minis of all time.

Mike: While I think the old Eschers are decent… I just do NOT get the obsession people have with Jes Goodwin. His minis were OK for that time, but they really don’t hold up well these days.

Anyway, I am really interested to start putting together the minis and see what I can come up with. I also noticed some cards in one of the images that was shared. I am curious to see whether these are simply character reference cards, or if they are random event cards like the new Blood Bowl decks. Necromunda, but with wacky, random shenanigans?!

Casey: I think they are reference cards but could be random events, there are shots of those tentacle markers. The underhive is a dangerous place.

I think people who are into the Inquisimunda scene or converting minis in general are really going to like this set.