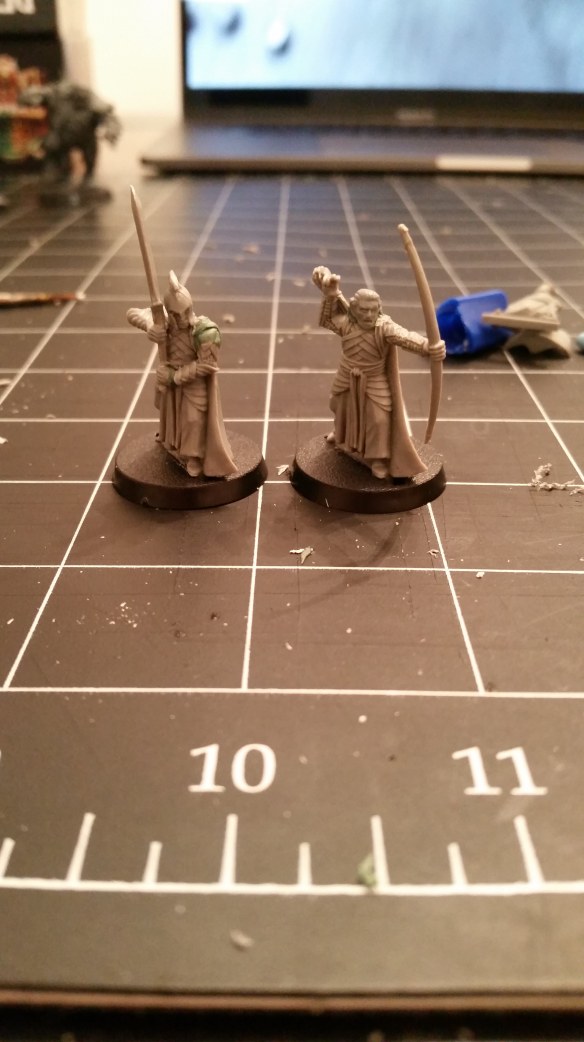 Just thought I’d give a few updates tonight on my Rivendell elves army for the Hobbit Strategy Battle Game. No progress on the heroes (except that I got some parts for mounted Gil-Galad) but I’ve been working on some troops over the past few weeks.

I’ve scrapped the idea of using silicone to make press molds for now, even returned the silicone to the store. Will just be using good old-fashioned hacking up minis. But if you’ve got an extra armored Glorfindel or Erestor let me know.

Please? … I know they are both still in production from Games Workshop, but if I could trade or buy one used I’d feel less guilty about chopping its head off.

First I started doing a test color scheme on a high elf bowmen. The idea was a cross between the color scheme from the Last Alliance scheme in Fellowship of the Rings and the concept art for the Rivendell horsemen in An Unexpected Journey, but to then switch the color placement around.

And this was the result:

Which I like quite a bit. I don’t think I’ve seen too many other armies with a similar color scheme. The problem is, when I bought a large lot off Ebay, it included a painted Glorfindel and Erestor on some nice bases. They are pretty nice paint jobs, but they are painted in the more standard LotR high elf color scheme, blue cloth and gold armor.

Sorry for the blurred photo of Erestor, it was already on my phone and didn’t feel like retaking the pic for this post. I guess the color scheme isn’t too radically different that I could probably get away with it. It’s something I need to decide before I do any more painting though.

And I do want to get some painted though for Battle Companies! So speaking of segues, I’ve started converting up some elves to be used in a Rivendell Battle Company. I did a fairly simple head swap. The Ebay lot I got also had an incomplete conversion that had the head of one of the plastic wood elves, so I stuck it on a bowmen to use as one of my heroes for Battle Companies.

I’ve never sculpted her before, but I think I did an OK job of blending it with the original head. We’ll see when it’s painted, I always see things more clearly once I’m starting to put some paint on.

I also wanted a sword elf that varied from the standard two poses from the old plastic elves. I made this one from a swordsmen and bowmen following some blurry pics of an old conversion guide someone on the GBHL Facebook group posted for me. 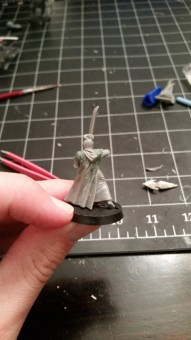 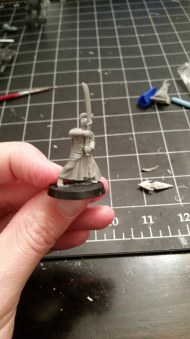 This has been my most ambitious use of green stuff to date. On my Blood Bowl team and Necromunda gang I pretty much just used green stuff to fill in the gaps on my plastic bits, but here I had to resculpt some armor bits and cloak to cover the shoulder areas and where I cut off the quiver. I like this pose, it is really close to matching the pose from the awaiting elves in the Last Alliance scene as in the film still seen above.

I wanted to see if I could create another pose from the other sword and bow figures. I hacked some up and then played around with blue tack with different poses.

I kind of like the pose where he’s resting his sword across his shoulders, might make a good captain if I put a shield in his free hand. In the end I went with a pretty standard two-handed chop and produced this: 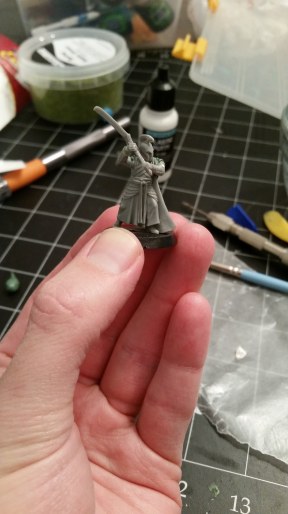 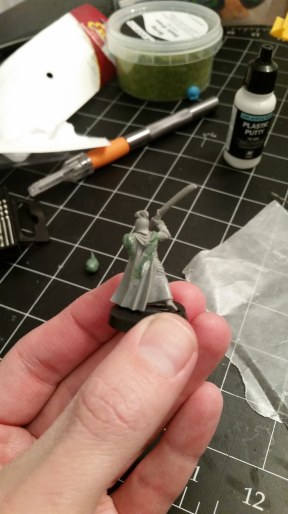 Pretty good, but then a couple nights later I made two more, and I decided for the second variation it would be less fiddly and more secure to not mess around with cutting the arms at the wrist and positioning. The angle of the sword is slightly from a different angle, but I think the result is still pretty good. 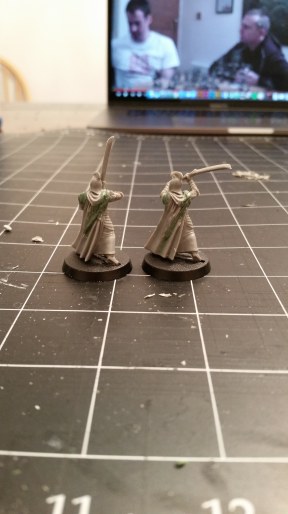 That’s where the Rivendell project is at currently. But as if I didn’t enough to do, I went ahead and started another LotR good army as well …

7 thoughts on “Under the hobby knife: Rivendell updates”