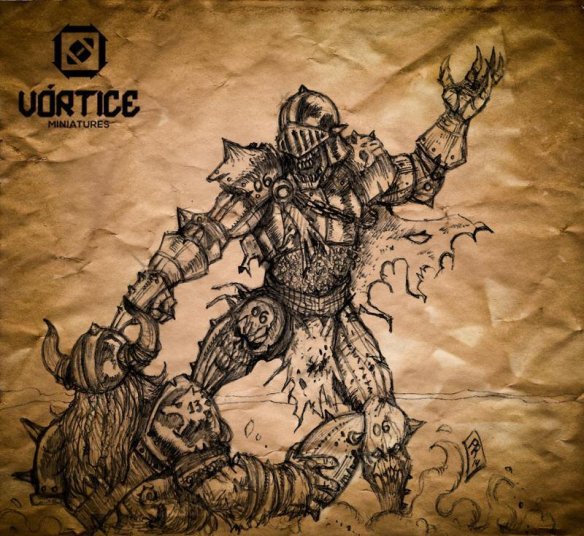 Over the years my collection of Blood Bowl teams has waxed and waned in direct correlation to my time available to game and my economic standing.  Despite the fluctuations the one team I never pulled the trigger on was the Undead team.  I’ve always liked the idea of an Undead team ever since I read about the Champions of Death and their coach Tomolandry the Undying.  Despite the interest in the team I was never truly satisfied with the team options out there.  GWs Undead had good components but the Zombies where weakly done and I also felt like the Ghouls looked like they were in need of a sports bra.  What I longed for was an Undead team that had a consistent sports team look that still offered great details and a lot of character.

I don’t know much of Vortice Miniatures and wouldn’t have ever come across them if I hadn’t been cruising around on Talk Fantasy Football.  Like most independent fantasy football companies they are based out of Spain.  Vortice is a bit unusual in that they don’t appear to be a full time model producer.  They do have a rudimentary website that has not been updated in a very long time.  They have only produced a few single models in the last year or so and mostly of late they appear to cranking out custom portable Fantasy Football game boards.  I’ve inquired if there are any more plans for future team production and I have not heard back from Vortice on the issue.  I’m one of the six remaining humans not on Facebook but Vortice does have a presence there with all their gorgeous models viewable.  They also showcase their custom pitches that they build which have look to be crafted with care and commitment.  Without a website there is no direct ordering which I’ll discuss later, but despite this I’ve placed three orders with Vortice to date and I’ve experienced no issues with communication, delivery, and product quality.  So with a few hurdles in the way why would you want to purchase their Undead team?

Vortice has relied on the talents of Pedro Ramos for the sculpting of their models.  Pedro is not only a fantastic artist but he also hand sculpts his miniatures which gives them not only realistic proportions but also great individual facial expressions.  Second, Vortice uses a very high quality resin for their models.  Its a hard resin that takes very sharp details but it is not brittle like the Forge World resin.  Please note like all resin the thin parts you still must be careful with.  I don’t know how they do it but of the two teams plus extra models I have ordered from them they have all had almost no mold lines or flashing on the models and I’ve never encountered any air bubbles on the models.  I honestly never considered resin as an option until I got my hands on the Vortice Undead team.  After the normal soapy wash I’ve had no problems with my Games Workshop paints sticking to the models.

So what do I like about this team?  They are actual football players.  While Games Workshops’ last Undead team had some good models, it didn’t exactly convey the look of a sports team on the field.  The Vortice team has been sculpted to not only have the required helmets and pads you would expect to see on a player, but it also has the great details of all the straps and belts that are holding the armor in place.  The models have the look of a serious team yet there are numerous humorous parts that give them great character.

The Zombies and Skeletons are chocked full of small details like exposed organs or bones popping through the skin that really gives them uniqueness .   While some designers have gone the route of the multi-species Zombies, Vortice has stuck with a more consistent look.  While I love the idea of raising my friends’ (especially Jeff’s) former players back on the field, I still want to have my team to have that consistent look so I’m fine with the models all being Undead humans.  The Skeletons have some of the most ragged uniforms on the team which I like because in my mind I picture the Skeletons as some of the longest serving players on the team (hence the lack of flesh).  The Zombie poised to stomp with his boot is a great model as is the rude Skeleton flipping the bird.  The only potential draw back amongst the Skeletons and Zombies I have encountered so far is despite the strength of the resin the Skeleton’s ankles are still quite thin so a bit of care is required to make sure they don’t snap.

I always felt the GW ghouls where the weakest point of the team.  They had a chubby look to them with little pot bellies and looking in need of some support up top.  The Vortice Ghouls in contrast look like speedy and physically fit players and they are carrying just enough armor to make the AV7 believable.  The masked hoods are a great touch and they remind me of the Scarecrow from the Batman films.  The poses are also superior to the GW perpetual high-five pose that 3rd edition Blood Bowl seemed to be fascinated with.  The Ghoul with the hangman’s noose still around his neck is very characterful and instantly gained the nickname the ‘hanged man’.  Any time you can look at a model and immediately start coming up with a story behind him then you know the sculptor is doing a good job.  Unfortunately one of the ghouls is  showing off the dreaded one foot on the base pose and my Neanderthal like hands snapped him off his tab.  It will take a bit of finagling to pin him but not the end of the world. 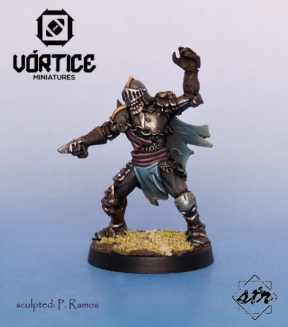 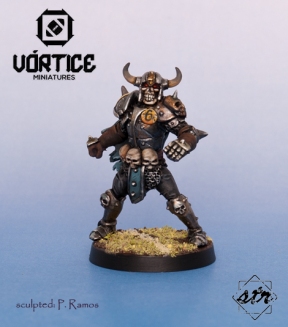 Perhaps the least sports looking pair on the team, the Wights still get a pass in my book.  While the armor isn’t exactly Football looking I still find these models to be great looking Wights from the classic era of Games Workshop.  I always enjoyed the old Warhammer Wights clad head to toe in ancient armor so I appreciate the look here.  I think with correctly done color scheme you can keep them matching the look of the rest of the team yet still harken back to classic Warhammer Fantasy.  Both players are sporting a ragged half cape that gives them a sinister look and decent looking sports poses.  Wights aren’t exactly speedy so standing poses will work and having both feet on the base is always a plus.

The Mummies are big!  I’m talking big guy sized height.  I’ll admit that the size of them gave me pause at first but after seeing them lined up with other teams I’ve come to accept it.  Personally I’ve always imagined Vampires and Mummies having an unnatural strength more than being ripped monstrosities, but the height difference on the Mummies really makes them stand out.  Since Blood Bowl’s re-release with the larger scale I don’t really feel that the size makes as much of a difference anymore.   The models themselves are both single piece which is a huge plus.  The poses aren’t particularly exciting but they look the part of ST 5, MA 3 brick walls.

I’ve never wrapped my head around the Necromatic team.  I was aghast when I heard that it was originally intended to replace the Undead team, and I’m glad that it wasn’t the case.  The Werewolves I’ve not figured out with their fast movement, average strength, yet Frenzy and Claws?  I picked up the Necro components so I can give the team a try and I am glad I did.  The Werewolves are also oversized for their strength coming in taller than the ghouls yet shorter than the Mummies.  Obviously the one on the move has a much lower profile.  Both of the designs are excellent though and I look forward to getting some paint on them.  With the increased size Pedro Ramos packed both with a ton of details in the fur and shredded clothing.  I like the standing Werewolf with the helmet in his hand.  I imagine him beating his opponents senseless with the helmet during a Frenzy induced rage! 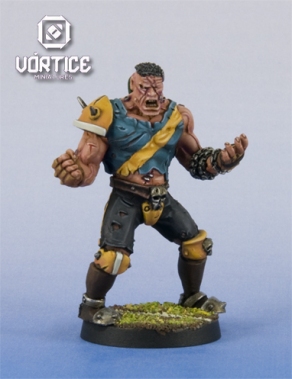 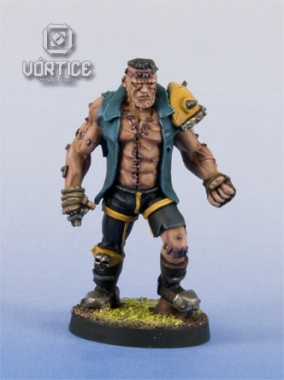 The Flesh Golems are on par with the Mummies for size.  Being only strength 4 I perhaps would have preferred something a bit smaller, but as with all the reasons I said with the Mummies also apply here.  They are the teams heaviest hitters so having them standout on the team makes sense.  The sculpting is again excellent with the larger size affording the opportunity for Vortice to add in the details.

I ordered the full Graveyard team which includes everything but the Skeleton players but also offered a few extras.  While I’m not sure if I’ll ever use the components it’s always nice to have some.  The set also includes an undertaker model that I suppose is meant to be an Igor.  Unfortunately he was packed up in the move so I could not get a picture.

Please forgive the mismatched bases.  I’m in the process of moving so I just grabbed what was available.  The above shot gives you a run down of the team’s scale on its own.  As you can tell there is a big step up from the Werewolf to the Mummies and Flesh Golems.  On its own it might look like too much but let’s see how it compares with other teams. 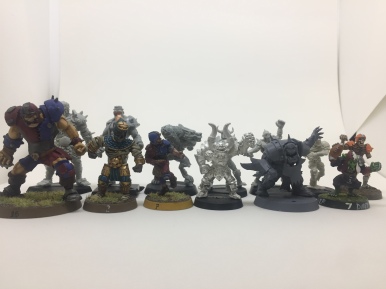 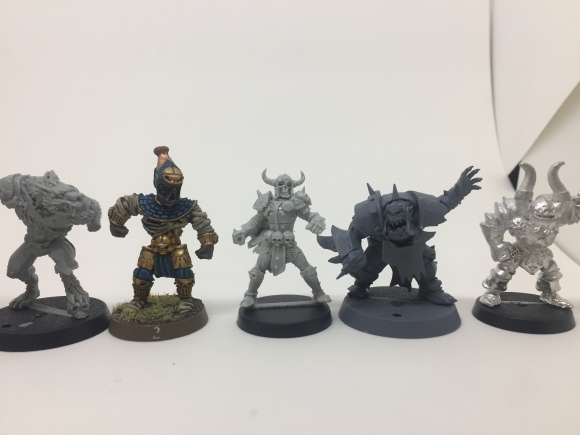 My initial misgivings about the team’s scale melts away once I see them mixed in with the other miniatures.  While my selection isn’t exactly BB staple teams I think it highlights how little the scale comes into play once everything is on the table.  Frankly, that orc linmen would be a giant if he just stood up straight.  For new players using exclusively the new BB teams I think you’ll find this team is the perfect size.

So if I must fine something to complain about I’m sure I can think of something.  I am a completion-ist when it comes to fielding a full 16 man roster on my teams.  The one draw back on this team is that the unique sculpts would have to be duplicated amongst the Skeletons and Zombies to fill out the team.  Since most people abstain from the Skeletons that would leave you with only four sculpts to work with.  Still, with a classic Undead team you have 14 unique models to work with when including the Skeletons but only 12 when it comes to the Necromantic team.  A small complaint but worth mentioning.

As I mentioned before Vortice does not have a regular website so all order requests have to go through email.  I emailed vorticeminiatures@gmail.com and listed exactly what I wanted and where I wanted it shipped too.  They have always replied quickly with a price quote and directions on how to pay through paypal.  Not exactly cutting edge business but I’ve had no problems.  Being based out of Spain means the Euro exchange rate can be unkind but the prices are listed as so:

This is far from the complete Vortice selection but as I would like to showcase more of their other products later I have left off the rest of the price list.  If you are curious to see what all they have available don’t be afraid to email them or if you are like the rest of the planet check out their Facebook page.  I strongly recommend you check out their star player selection and their Demon of Khorne model.  Although there are no rules to use for it I’m tempted to buy that damn demon every time I see him!

If you have any questions about the team feel free to comment!

5 thoughts on “Off the Beaten Pitch: Vortice Undead/Necro Team Review”