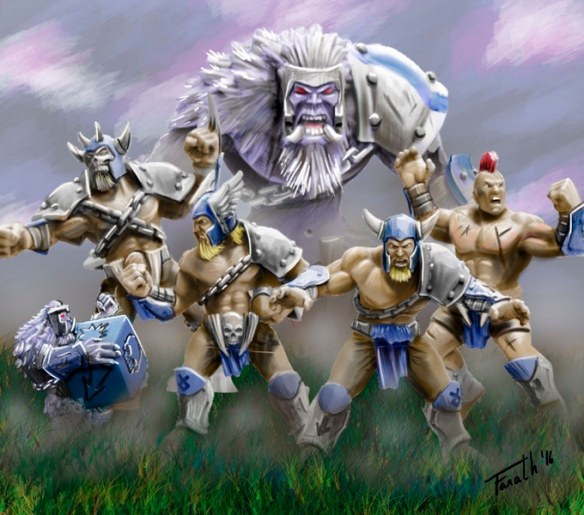 Want to play a Norse team in your local Blood Bowl league, but can’t find any Norse miniatures made by Games Workshop? No problem! Hungry Troll Miniatures ran a Kickstarter campaign back in April for a new Norse team (as well as two other teams!) and the miniatures have just landed at my front door!

Now, I have to begin this post with a disclaimer… I didn’t actually pick up this team for myself. I got it for Jeff in exchange for him painting my Pro Elf team for me. Having said that… I have the minis and Jeff doesn’t, so I am going to review them before handing them off! Also, since they are not my minis, I did not do any cleanup work on the minis like I normally do.

The “Fenrir Sons” miniatures were designed by Fanath who is well known on the indie “Fantasy Football” miniature scene. They are 3D modeled miniatures and were available during the Kickstarter campaign in both resin and metal. The team they I received is resin, so I will only be covering those minis.

The image above is from the campaign and shows quality images of all the miniatures on the team. Interestingly, the campaign showed Catchers on the team, even though Runners replaced Catchers some time ago. Having said that, functionally they serve the same purpose, so I can let it slide. As far as the design of the minis, I feel like they are one of the better looking Norse teams available. Personally, I do prefer the Pedro Ramos designed “Sno” team from Greebo Miniatures, however, I would say that this team runs a close second for me. 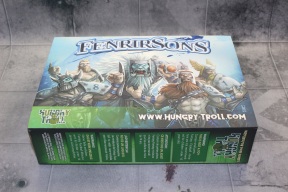 The team comes in a really nice box for an independent mini company. Easily one of the nicest packaging jobs I have seen from an indie. The really nice box houses a lot of goodies! There are four baggies of minis and bits, and lots of loose bases.

There are three different sized bases in the box. 15mm round bases for the counters, 25mm round bases for the standard players, and a 30mm round base for the Snow Troll. I have mentioned a couple of times that I don’t particularly care for these types of bases. My reasons are both practical, and simple preference. The practical reason being that the tops of the bases are VERY smooth, and without some texture for glue to grip to, I have had issues with basing material simply sliding right off of the top of these bases long after the glue dries. The preference reason I don’t care for them is that the slots (that you have to cut yourself) are in the direct center of the base as opposed to slightly offset like classic Games Workshop bases, and I prefer the offset style bases. Note though, that these bases are very common for minis from European indie companies.

Let’s look at the minis themselves, starting with the Linemen. 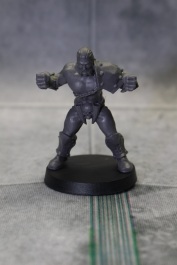 There are seven different Linemen sculpts. Like all the minis of this team, there are no duplicate poses for the Linemen. As far as scale, the Linemen are really the shortest minis of the team being about halfway between the size of the 3rd edition and 6th edition Games Workshop Linemen. The material all the minis are cast in is a little different than anything I have come across before. They are billed as “resin” but they feel kind of like a hard plastic to the touch. Not sure how brittle they will turn out to be, but the material doesn’t seem hard enough to make me nervous.

Next up is the Snow Troll. 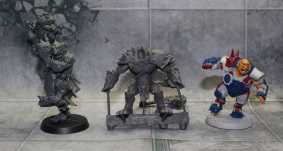 The Snow Troll is sporting a fairly static pose, but the design is nice and I don’t really need a dynamic pose from a Big Guy mini. Speaking of Big Guy… man, this guy is BIG. He is larger than the new Human team Ogre, and only slightly smaller than the recent Troll, both from Games Workshop. However, considering that the Games Workshop Troll is up on one foot, and the Snow Troll is in a slightly hunched over pose, I think it’s fair to say that they are really about the same scale. The design is really nice, and fits well with the rest of the team.

The Ulfwerners are really nice and convey feral feel of the position. As they are ST4, they are a bit bigger than the Linemen minis. It may be hard to see in the picture, but the Ulfwerner’s eyes line up almost exactly with the top of the 6th edition Lineman’s helmet.

The Catchers/Runners manage to be dynamic without being silly, which can be harder to achieve than it sounds at times. This is where the scale of the minis starts to wander a little bit. The ST3 Catchers are taller than the ST3 Linemen and the same size as the ST4 Ulfwerners. That’s a small gripe, but it would be nice if the scale felt a little more uniform. 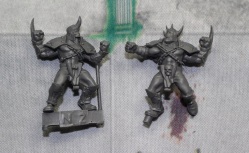 Man, there are a lot of positional players on this team… Here we have the Blitzers. Again, we have the dynamic, without being silly poses. That is always a good thing. Like the other positional players, they are slightly taller than the 6th edition Human Linemen. I have to say, I know we all have to deal with scale creep, but I’m not really sure why 60+ percent of this team is even larger than the new Games Workshop minis. Again, a minor gripe overall, but… 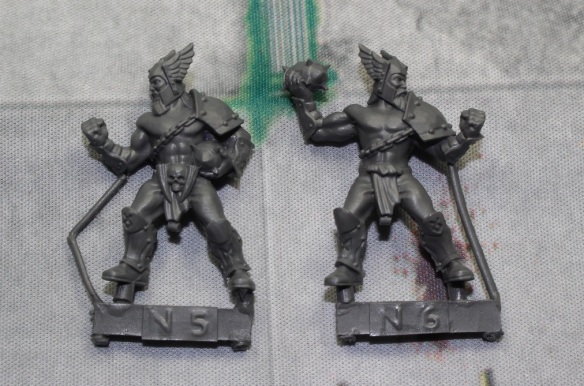 The last of the player miniatures are the Throwers. They have nice big winged helmets to set them apart from the rest of the team. In a nod to classic 3rd edition Blood Bowl teams, they are also the only minis on the team holding a football. Luckily their poses are completely different, because otherwise these two guys could be twins.

On to the extras!

Here we have the counters for the team. The counters include one player holding a Block die, one holding flags, and a football in a beer mug. Presumably counters are Reroll, Turn, and Score, respectively. It is worth noting that these minis are 1) metal, and 2) tiny. These are what the 15mm round bases in the box are for. I also included a picture of the counters next to a 3rd edition Lineman for scale. They’re definitely small, but since they are counters, that isn’t a bad thing at all. 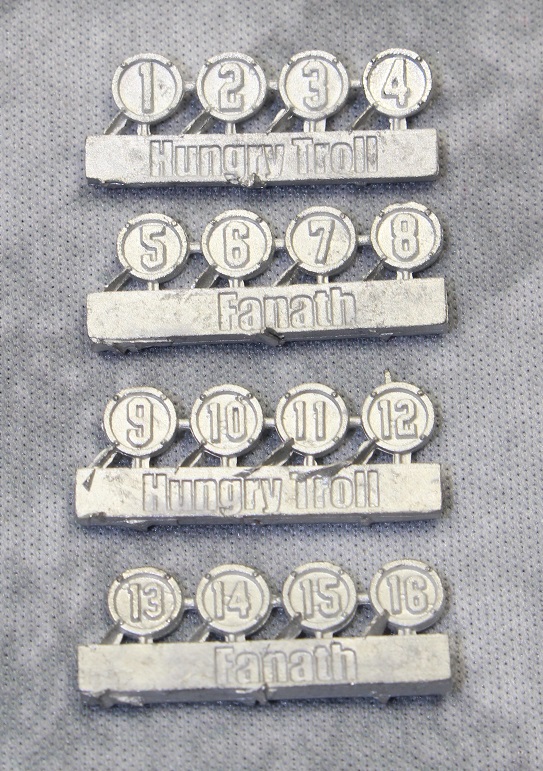 The last thing in the box are these great little metal number plates. They are the perfect size to fit on the edge of the bases. It may seem a little silly, but these numbers might be my favorite part of the team. They are a heck of a step up from hand painting numbers, or slapping water slide transfer numbers on a base.

On the whole, this is a really nice Norse team. The positions are fairly easy to tell apart, the sculpts are nice without any players doing handstands or other silliness, there are no repeated sculpts, they come with counters, they arrive in really nice packaging if that matters to you, and the come with awesome team numbers!

The scale of the minis are a little hit and miss with the slight majority of the team actually being slightly larger than the new Games Workshop Blood Bowl minis, and at 85 Euros this team is only slightly less than three times more expensive than a Games Workshop team. (of course, with the caveats that this team comes with 16 minis instead of 12, and it contains all unique sculpts)

The Kickstarter pledges are just now getting into backer’s hands, so the team is not yet available for sale on the Hungry Troll website, but I expect they will be available soon. So if you are in the market for a new Norse team, and don’t want to wait however many months or years it might take Games Workshop to release an official Norse team, the Hungry Troll Fenrir Sons are a worthy, if premium option.

What do you think about the team? Do the nice sculpts make up for the scale issues?

8 thoughts on “The Norse Are Here!”